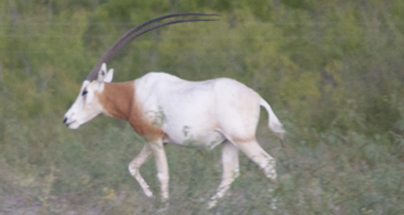 In the late 70’s there were less than 50 scimitar-horned oryx in Texas. Few addax were found on Texas ranches as only two were in the state. The dama gazelle was extremely endangered in the wild habitats of Africa, and there were only 10 or less alive in Texas.

And so it was that in 2005, with numbers extremely low in their native northern Africa habitats, these three species were listed as endangered and the ones in Texas then became known as the “three amigos.” The scimitar-horned oryx is native, but probably extinct, in the arid plains of North Africa, but the good news was that according to the Exotic Wildlife Association in 2005 there were more around 11,000 on private ranches in Texas. Yes, from 50 in the 1970’s to thousands in 2005. The addax was critically endangered in its native Sahara Desert area of North Africa with only a few scattered sightings in the wild. The good news was that there were over 5,000 on Texas ranches. The dama gazelle was also critically endangered and found in isolated pockets of Chad, Mali and Niger in northern Africa. The good news was that there were 800 living on ranches in Texas.

Yes, from 50 in the 1970’s to thousands in 2005. The addax was critically endangered in its native Sahara Desert area of North Africa with only a few scattered sightings in the wild. The good news was that there were over 5,000 on Texas ranches. The dama gazelle was also critically endangered and found in isolated pockets of Chad, Mali and Niger in northern Africa. The good news was that there were 800 living on ranches in Texas.

Why were these three species abundant in Texas, yet endangered or gone in Africa? It’s simple. Texas ranchers were breeding them and selling a rather low number of hunts for some of the animals. The funds gotten from those hunts did two things. It put some money in the hands of the ranchers who were managing these three species, and some of those funds were then used to build fences, breed, feed, maintain, manage, and grow the populations of these species.

Several animal rights groups took exception to this. No, we sure can’t have private ranchers breeding and maintaining a growing population of an endangered species, with little hope for their survival in Africa. Especially when those bad Texas ranchers were obviously doing so to get rich from hunting those species. No, we can’t have that. So, led by the Friends of Animals, they headed for the courts to stop this wanton slaughter of wildlife. Better to let them all die. Truth be known, if you eliminate the Texas populations, you basically eliminate all three species, because without the Texas animals, fifty years from now there is a good chance there will be few to none left in Africa. As mentioned, one of the three is already thought to be extinct in its native Africa.

One management strategy, when you have few numbers of a wild species, is to propagate captive animals and do so in a way that you get as much genetic variability as possible (by breeding animals from one captive area, to those in another), then release some in wild habitats to improve the genetic variability of the wild animals there. Note, today there are two enclosed areas in Senegal containing 150 scimitar-horned oryx. Those are probably the entire species left in Africa.

Let’s assess this oryx situation again. There are around 11,000 in Texas, and 150 in Africa, so let’s do all we can to eliminate those in Texas. Does that make sense to you?

In 2005, when the three amigos were declared endangered, the U.S. Fish and Wildlife Service created an exemption whereby Texas breeders still breed these species and still sell some hunts. That continued to happen and the species thrived in Texas much to the displeasure of several anti-hunting groups. For four years these groups fought to eliminate this exemption because it did not allow for public comment. That pressure led to the U.S. Fish and Wildlife Service eliminating the rule allowing breeding and hunting without permits in January 2010. Anyone owning these three species had to apply to the Feds if they wanted to import, export, or take (hunt) the three amigos. That meant that each permit application by each ranch was published in the Federal Register and open to public comment. After review and approval by the Feds, federal permits could be granted to hunt these three species. Thus, beginning in early April 2012, the ranches allowing and selling such hunts had to get an individual enhancement of survival permit for the hunts.

Few ranches would do that. Costs, delays, legal proceedings and more delays and paperwork, would make the ownership of these three species a liability and not an asset. The impact of this was rather immediate and one estimate was that the numbers of these three species were cut in half from 2010 to April 2012 in anticipation of the need for these permits from the Feds. In other words, some Texas ranchers and breeders of these three exotics felt that the loss of an economic incentive to keep these animals on their properties was not worth the cost, delays, and hassle.

Every once in a while, political interference gets it right. Enter the 2014 Omnibus Bill. This appropriation’s bill was a compromise to keep the government viable so it could pay its bills. That battle has raged on for several years, with sequestration, political fights, delays, government shut down, etc. So, both parties of Congress, understanding that citizens were growing wearing of the infighting, compromised on various issues in order to get votes to pass this spending bill. Yes, if you vote for this bill, we’ll include this provision that you want in the bill. It’s been going on in Congress since inceptions.

So, political leaders from Texas, realizing that the rule imposed on ranches in Texas, relative to the three Amigos, was neither good for the ranches, nor good for these three species included a provision to do away with the need for enhancement of survival permits. One provision of the Appropriations Bill eliminated the relatively new rule and exempted the ranches from the new permits. This puts the ranches and breeders of these three endangered species back to square one.

Is this good for these three species? Of course it is. The antis will hate that these species will again be legal game for hunters willing to pay to hunt them. But the ranches will again have a reason to grow their populations, and when we look at the things taking place in northern Africa, none of which are good for wildlife there, this political step may well be huge for the survival of the three Amigos. Ole. Bravo!!!

Lets Go To The NWTF Convention & Sport Show This Weekend

HECS, Does It Work? See It Yourself Right Now.