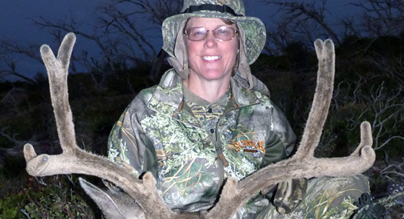 When we got the envelope from the Nevada Department of Wildlife in April we had our fingers crossed. You never know if you’ll be lucky and draw a tag, but you have to try. We checked the items – mountain goat – unsuccessful; antelope – unsuccessful and so it went until we saw mule deer – successful. My wife, Shelby, and I had drawn tags for undoubtedly the best trophy mule deer unit in Nevada. To give you an idea of how good this unit is, landowner tags sell for $5,000 and up. Were we excited? You bet.

We had the entire summer to get ready since the season goes from early August to early September, about four weeks. Equipment was checked, clothing was selected and much time was spent practicing with our bows. Finally August rolled around. It was show time. Our good friend, Gary Gallegos, who helped us kill Desert Bighorn sheep the year before agreed to go with us on the hunt. Due to her work schedule, Shelby would miss the opening week and would hunt later in the season. Gary and I would go it alone for a while.

I’ve been fortunate to have taken four Pope & Young mule deer and I was committed to go for a nice trophy or eat tag soup. For a week Gary and I tramped over the cedar covered mountains. We saw several nice bucks, but not the one I was looking for. One day I saw the biggest mule deer I’ve ever seen. He had an honest 34” spread and nice tine length. Unfortunately, he was going away from us and down into a valley dense with cedars. No chance.

I had opportunities to take some decent deer, but either passed on them or couldn’t make a successful stalk. Some of the reasons for failed stalks were almost comical. One time as I stalked a buck wearing only my socks in rocky terrain, an eagle flew up out of the brush and spooked the deer and me. We never figured out why the eagle was on the ground but guessed he had made a kill and was eating it. Another time, as I drew on a buck he walked into the sun and there was no way I could see to make the shot. The bottom line is I blew it. Tag soup for me. Now we would concentrate on a buck for Shelby; who is no rookie when it comes to hunting. In the years we’ve been married she has killed 10 whitetails, an elk, a Desert Bighorn sheep, a black bear and turkeys but had never taken a muley. 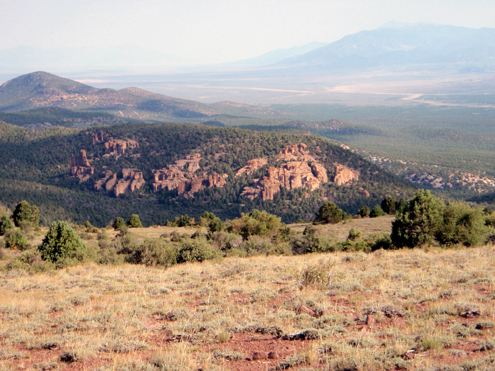 The area we hunted was the top of a large mountain. It was so steep and tall that we were forced to endure a 45 minute, bone jarring ride in a side-by-side 4 wheeler to get to the top of the 8,500 foot high mountain. The ride was no piece of cake. The boulder strewn road would pose a serious challenge to a pickup. It’s surprising how cold August mornings can be, downright chilly when riding a 4 wheeler.

Each day we went to perches that gave us a large area to work with our binoculars. That year I purchased a set of 15×50 Swarovski binoculars and was I glad. The binos were spectacular and allowed me to see far beyond what I would have guessed. Quality binoculars are a necessity in this type of hunting. I’ve said it before and you’ve heard other people say it as well, buy the best binoculars you can afford. You won’t regret it. Spending hours behind binoculars can cause enormous eye strain. Quality glasses make it a lot more tolerable. Often while we glassed wild horses would venture close to see what we were doing. To say the view was spectacular would be an understatement. We could see for at least 50 miles, perhaps more. We glassed the same mountainsides over and over. Sometimes a mule deer or elk would appear in an area that moments before had been barren.

Over the next few days we saw quite a few muleys. We tried some stalks but couldn’t close the deal. Finally one day as we scoured the mountainside with our glasses I saw two deer. Later we used my GPS to measure how far away the deer were – nearly 1 1/2 miles. At that distance I could tell they were bucks. We looked long and hard at them. Our consensus was that they were respectable bucks, but not huge. I asked Shelby if she wanted to try for them. She looked at me and said, “You bet, why not?”  She has never claimed to be a trophy hunter and it was obvious she wanted to get her first mule deer.

The deer were on the mountainside across from us. A valley separated us so we would take the 4 wheeler and get as close as possible and then try to stalk closer. It was agreed that she and Gary would do the stalk. I would watch them and signal if the deer moved. It sounded like a pretty simple plan and things started off well. Shelby and Gary worked their way toward the bucks. They used the waist high vegetation as cover and moved when the deer had their heads down feeding. All was going well and then a doe materialized between the hunter and the hunted. If she spooked it was over. For some unexplained reason the doe walked through the area and didn’t spook. The bucks continued to feed and move closer to Shelby. Finally only 40 yards separated them from Shelby. She ranged the distance, drew her bow and shot. Instantly the buck went down – a spine shot. 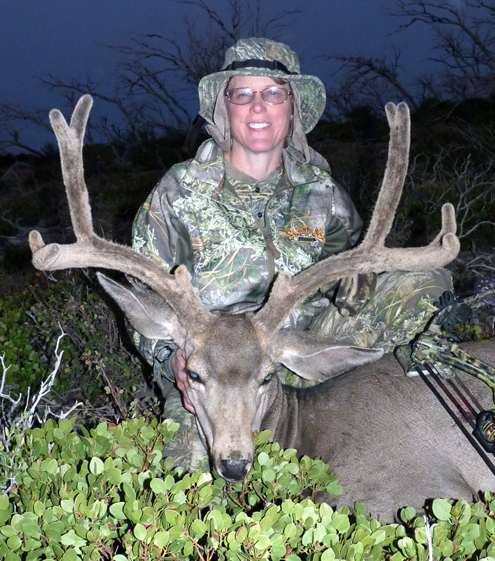 I couldn’t get my gear together quick enough. I wanted to be there to share the moment. You can imagine the scene. I gave Shelby a big hug and a kiss. We all shook hands and admired her trophy. Shelby was elated and I was proud, very proud.

No Hiding From Moultrie's 150i