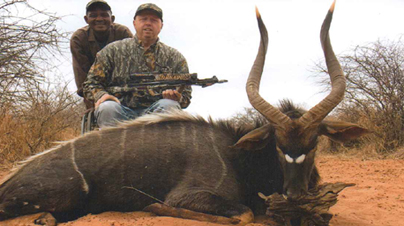 In last month’s column Diane, Alex and I were in a ground blind overlooking a waterhole waiting for the action to start and we weren’t disappointed. In less than an hour there were all sorts of animals coming in. We had Warthogs, Impala, Kudu, Eland and even a giraffe along with the many colorful birds. It is always fun to watch the animals as they battle for position at the water. Things were pretty serene until something spooked the animals and they all took off in a cloud of dust.

Glancing out of the shooting port, I noticed an Eland coming in for a drink. I got Alex’s attention and he glassed it over and said that this was the sick one we were looking for and I should get ready. As the bull sauntered to the water I ranged him at 35 yards. I picked up my crossbow and when he gave a perfect broadside shot I sent the Muzzy tipped arrow on its way. We heard the loud smack of a good hit and watched the bull trot away. It only went about 40 yards and stopped, stood still for several seconds then just tipped over.

Alex started cheering and slapping me on the back and saying what a good shot I had made. We called to Zewely and said we had one down and to bring the truck. We crawled out of the blind and went over to see my prize. It was not the biggest Eland but it had good mass. We did the usual picture thing then loaded him on the truck and went back to camp. First day and I already had one animal, things were off to good start.

That night, after a five star dinner, it was off to bed and get ready for the morning hunt. You do not need to get up early as the animals don’t start moving till mid-morning so there is plenty of time to enjoy a good breakfast. After filling up we talked over the days plans, loaded our gear and headed out to the blind. This morning we were going to a different blind where a big Nyala bull had been seen.

At the blind we settled in and like Day 1, waited for the action to start. Zewely was going to sit with Diane and I on this hunt. After watching the parade of animals for two hours we noticed a huge Nyala bull making his way to the water. One look and I could tell that this was the bull I wanted. As he approached the water, I picked up my bow and got ready for the shot. When he was 25 yards and broadside I sent the Muzzy tipped missile on its way. There was a loud smack and the bull took off on his death run. We radioed Alex and he came back to the blind and him and Zewely started the tracking job. Diane and I stayed at the blind with a radio so we could monitor the progress. We soon got the call that they had found my bull. Alex came back with the truck, picked us up and we drove the where the Nyala had fallen. After the celebratory congratulations and pictures taken we loaded him up and went back to the lodge.

Once back at camp we had one of Liezel’s fantastic lunches and made plans for the evening hunt. We went back to the blind that we used the first night where we again saw many animals including a mongoose, which was cool but nothing I wanted to shoot. That night we decided to try a different blind in the morning. This one had a huge Eland coming to the water.

The next morning we went to the blind and got settled in and is usually the case in Africa, it didn’t take long before the animals to start wandering back in. Like always it is the Impala that come in first followed by Warthogs, Kudu and Blesbucks. We had been watching the show for about two hours when we saw a group of Eland making their way in. Unfortunately, the big bull we were looking for was not with them so we just sat back and waited.

I was staring out of the shooting port enjoying the moment when I saw a cow Kudu walking toward the blind. She kept getting closer until she finally had her nose in the window. She was only a foot away from me and I didn’t want to spook her so I froze until she finally just walked away. As she walked I noticed a big Impala buck. Zewely said that was a huge buck with 25 inch horns and if I got the chance I should take him. I ranged him at 23 yards then waited for that perfect shot. When he was in position I lined his kill zone up in the crosshairs and released the arrow. With a solid hit I knew he would not go far. We radioed Alex to come pick us up and we went back to camp.

Alex and Zewely went back to recover my Impala but the jackals had gotten there first and there wasn’t much to bring back. This is always a problem when hunting Africa but again shows that nothing is ever wasted.  That afternoon we went back to the same blind and saw the same bunch of Eland but again, the big bull wasn’t with them. These Eland are really huge and fun to watch. With nothing I wanted to shoot we decided to go back to the lodge where we sat around the campfire. We watched Pierre cook the steaks over the coals, had a few drinks then went in and had a three course dinner. All this food was getting a little too much for me. I felt stuffed all the time. WE made our plans for the next day and as the night sounds surrounded us, it was off to bed.

This African hunting is really something special. Three animals in three days and I still had three days to go. It is always an adventure every time you go out. The many animals you see as you drive out and the many more you see at the blind sure makes this a hunters paradise and the thrill of not knowing what might walk in always leaves you on the edge of your seat.

Next month’s column I will cover the last three day of my hunt. Stay tuned as I had a big surprise.