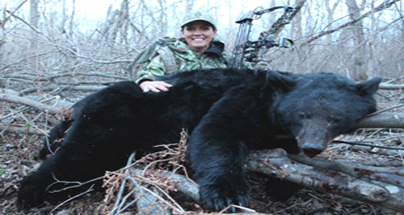 Saskatchewan is home to the largest inland delta in North America. The diversity of wetlands in combination with the network of streams, shallow lakes and forested levees make Saskatchewan one of Canada’s richest regions for diverse waterfowl and wildlife. After talking with Big Game Delta Outfitters, I was not only thrilled to get the opportunity to bow hunt their abundance of huge black bears but I would get the chance to learn more about the native people of that area, the Swampy Cree Nation.

Moose, elk, deer, bear and other fur-bearing mammals are vital to the local Swampy Cree people who depend on fishing, hunting and trapping as a way to provide for their families. Many of them also work as hunting guides so I was thrilled to spend a week learning about their culture and ways of living off the land. In my opinion, that’s what hunting is all about… meeting fascinating people and experiencing the adventure and spontaneity of a new area.

The 20 hour drive from Montana was long and draining for Jim and I but our energy was renewed when we pulled into camp and were greeted by the Outfitter Darrell Tomanek his wife Alaine and crew. All of the guides and camp workers were from the Swampy Cree Nation and live in Cumberland, the closest city to the outpost. The quaint one-room-cabins would be our home for the next eight days and we were anticipating getting into the forested swampland of Saskatchewan with our camera and bows in hand.

After unpacking our gear, we devised a game plan with our main guides Clarence and Walter. Unlike most black bears in the western states, the bruins of this area were described as bold and aggressive. I’ve hunted black bears in Montana, Idaho and Alaska and even though there are occasions where bears can get intrusive and attack, they’re more likely to be skittish and afraid when seeing or smelling a human. “I was attacked while resting on the Polaris last week.” Clarence exclaimed. “I was leaning back with my eyes closed and felt the 4-wheeler bump. When I opened my eyes there was a black bear inches from my face.” The hostile bear proceeded to strike at Clarence’s leg leaving him with two deep gashes and a trip to the emergency room. 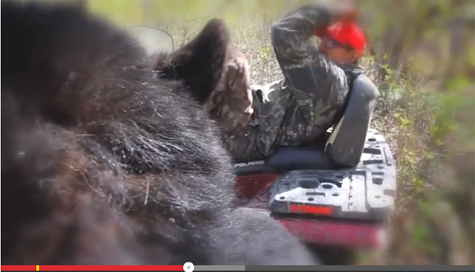 Our first evening’s hunt was in a make-shift ground blind constructed of pine bows and old logs. With Clarence’s story of his attack fresh in my mind, I admit I was acutely aware of any sounds of leaves or sticks breaking all around us. Unfortunately, squirrels and birds were the culprits making all the noise that evening and we had little to report back to Clarence and Walter during the long boat ride back to camp in the dark.

Like many spring time bear hunts, the evenings tend to be the most productive. Trail camera pics also help indicate the best time to be in the stands and the photos were all reporting bears coming in during the last four to five hours of light. That left the mornings free to visit with our guides and other members of the Swampy Cree. We shared hunting stories and recipes along tales of their native american traditions. One morning I was honored to sit and chat with two elders from the Nation that made traditional beadwork. Ben, one of the camp workers, translated for his 82 year old sister who mainly spoke Swampy Cree. We traced my foot on a piece of plain white paper for a custom order of moose moccasins to be handmade by the elders. Turning on my cell phone, it was so thrilling for me to share pictures of my beaded skull art with the women. The opportunity to sit with the elders was inspiring to me and worth the trip alone.

The second evening we decided to go to a stand that was home to a brute they had on trail camera from the two previous years. “If you see a big solid black bear with scars on his face feel free to let an arrow fly.” said Darrell as we glanced through his photos. “He’s a mean one and has been chasing off all the other color phase bears in the area.” Since I had recently shot a blond phased bear in Montana just weeks before our Saskatchewan trip, I wasn’t particular as far as colors. I wanted to arrow a nice, mature bear and as luck had it, got my chance on the second evening of the trip.

After sitting in the stand for three hours I finally caught movement out of the corner of my eye. “Big bear. Big Bear.” I whispered as Jim slowly swung the camera to the left. From behind our stand, about 75 yards away, a bear moved through the thick, brushy forest cautiously coming in to investigate. I slowly stood up and watched as the wise, old bruin came closer. When his head disappeared behind a tree I drew my bow back with anticipation and waited for the perfect shot. With this front leg forward I settled my pin and released the arrow. The bear bolted, crashing through the dense undergrowth of the forest floor. Feeling good about the shot, I listening intently for the death moan. “Great shot!” Cameraman Jimmy whispered as I stood trembling with excitement.

Walking up on the beautiful scar-faced bruin I couldn’t help but feel a sense of gratitude and a connection to the past. Our ancestors lives depending on hunting to sustain themselves and although times have drastically changed, I still feel humbled and grateful when I’m able to hunt for my own food. Bear is one of my favorite wild game meats and I was looking forward to cooking up the steaks back at camp for everyone to share. 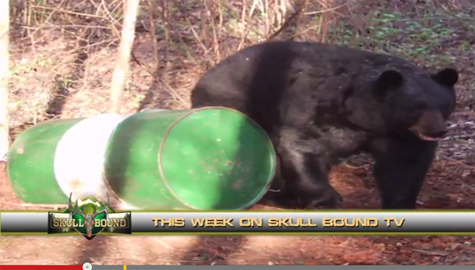 Although most members of the Swampy Cree do not traditionally hunt bear, they were all willing to try my bear steaks on the grill the following day. We passed around the deliciously grilled meat and gave thanks for the bear’s life and the experience that we shared between cultures.

For more be sure and watch Jana on: Skull Bound TV