by Dries Visser
in Bowhunting Posts
0 0
0 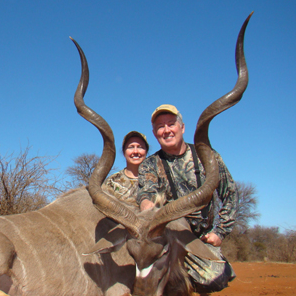 My wife and I just completed our third trip of a lifetime with Dries Visser Safaris. The accommodations, food, staff, PH, quantity and quality of game were up to the excellent standards that we have experienced with Dries on each trip. First class in every way. 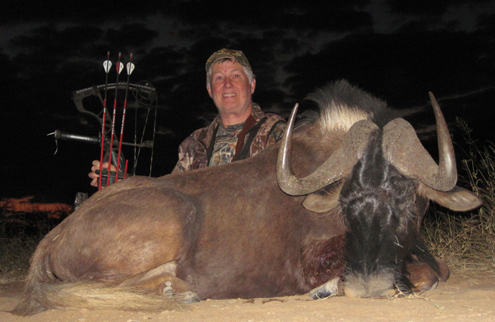 I admit that I was being a little picky this year on which animals I wanted to hunt. Eland, the first animal on my list, showed up on the second day of the hunt. After observing several bulls younger than I wanted to take, I was able to get a 23 yard shot at this beautiful animal. He only went another 30 yards before going down.

There is no ground shrinkage on these huge animals! My wife really wanted a zebra with her bow. Zebra is one tough animal for anyone to get with a bow so it was quite a challenge for her. She saw Zebra on two different days without being able to get a shot due to other animals and swirling winds. However, on the third time, she finally got her opportunity. She got it done with a great shot at 22 yards. She was thrilled with her beautiful stallion. I think I got more nervous when she was trying to get a shot than I did when I was shooting.

Anyone reading this is probably thinking of going to Africa and who to go with. I just can’t say enough good things about Dries Visser Safaris. I guess the fact that I have just completed my third trip with them says it all. Just do it!

Don’t wait to experience that hunt of a lifetime. You’ve always wanted to hunt Africa and now is your chance:  Contact : Dries Visser Safaris and do it. You only live once.