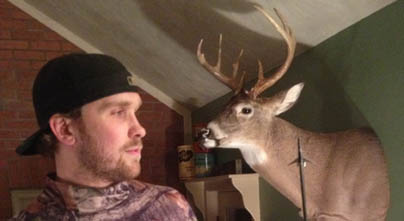 I received a letter from a Pennsylvania bowhunter that had a story to tell. I’m going to share that story with you. It may up your success ratio. The bowhunter is Tim Kinter and he is beyond avid when it comes to whitetails. Last season he conducted some field-testing and it got him a beautiful buck. Tim is into the science, both whitetail science and engineering. He has been taking notes.

Tim shoots a compound bow and a mechanical broadhead. He researched the broadhead. It was well represented on TV but he observed a penetration issue with it in the field. Penetration and a good exit wounds matter to Tim. Although he found one deer, a buck, the other doe was not recovered. Both failed to exhibit an exit wound. Both deer were shot in the ribs and not in a major bone. Tim wondered how a popular, high-priced broadhead could be such a poor performer.

This story is all too common with some popular mechanicals. The open-on-contact designs are the worst as they waste energy making a non-significant entry wound. Think about it. Deer don’t die from a big high entry wound, they die from blood loss and that occurs inside when blades cut through organs. The exit wound helps us track and recover a deer. Exits wounds are critical. 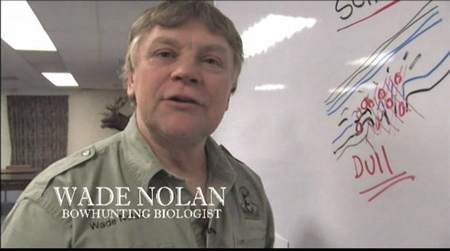 Tim began to shop. He’d seen a science based broadhead testing show on the outdoor channels and decided to try the mechanical they were testing. This broadhead seemed to have success designed into the engineering. This mechanical cut a 1-inch entry wound but then after passing through the ribs 2-inch wide blades deployed and were pushed through the deer by the reserved kinetic energy (KE) that wasn’t wasted on making an over-size entry wound. The pass-through was enhanced by the heads push and by the reserved KE. What a plan, a two-step deployment.

Tim tested the 100-grain head against his field points out to 50 yards and didn’t have to move a single pin, still dead on.

Next Kinter moved into his hot spot during the rut. It was situated off a cornfield in the woods where his favorite tree was waiting. He’d taken two deer from this trail in years past and his confidence was high. Being confident is very important. We hunt more effectively when we believe we are going to be successful. Here is Tim in his own words…

“The picture I sent of you is of the buck I ended up shooting. I had him on day five, 10 yard from my tree but after using a dragline, he caught wind of it and started on a trot with is nose to the ground. I grunted as loud as I could while drawn, but he completely ignored me.

A week later, I woke up from a nap around 2pm. It was starting to get dark around six. Looking outside knowing it was in the low 50s and I saw it was raining harder than it had all season. It took some convincing but I drug myself off the couch, took a sent free shower, put on my sent free traveling clothes and took off to my hunting grounds.”

“I decided on the way there I would hunt in the tree I shot my deer out of last year. Funny thing about this tree is I found it in the dark the night before I shot my deer last year. So… one sit one deer. After being miserable in this tree for almost 3 hours, I was ready to call it quits. Then out of nowhere, I see a doe 10 yards from my tree, followed by 3 more doe right behind her. Within 5 minutes, 11 does had passed within 5 yards of my tree. The wind was perfect. With the deer coming from the NW the wind was coming from their direction and hitting me in the face.

Knowing it was almost in full rut I was on edge knowing at any moment one of does had to have been followed by a buck. Not 2 minutes after seeing the last doe, I spotted him. Taking the same path as the does, he’d read the script. I drew back when he was at 30 yards, then everything slowed down. All I could hear was his footsteps and grunts as he continued to walk closer and closer. Finally, he stepped into my shooting lane. I gave him a grunt.

He stopped at 12 yards offering a slight quartering away shot. Placing my pin at the back of the front facing rib I let my arrow fly. Now before I finish I must tell you. While sighting in my Swhackers, if you want to call it that, I didn’t have to move a pin out to 50 yards. While practicing I wrapped electrical tape around the broad head so it wouldn’t open. So up to this point I never really understood why they called it a Swhacker. I’d never experienced the Swhack. That is until I watched that Swhacker penetrate exactly behind my pin on this buck.”

“SHHHHWWWACK!!! It is an unmistakable noise that only a Swhacker will make. Watching my buck run 50 yards and die was a great sight to see. I will always be a Swhacker man after this. While field dressing my buck I noticed that the opposite side lung had been completely cut in half. The exit wound was massive. I could slide my four fingers flat right into the hole. I’m done shooting the best marketed broadhead, now I’ll be shooting the one that is based on the science.”

After this experience, I believe the last thing every buck with hear, after being shot with the Swhacker, is the echo of the “Swhack” while the fall woods quickly fade to black.

Go to www.swhacker.com and watch the science.

Check out more by going to: Swhacker Broadheads