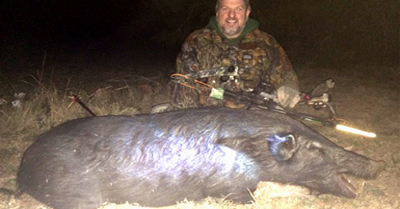 This winter has been a cold one and today started off with a bone chilling -3 degree wind chill and 10 degrees, and a 17 to 20 mph wind. So I guess the Minnesota guys were right at home. The blind set ups where Collin and Clesson hunted were out of the wind but the temperature was still frigid.

Apparently it was too cold for the wild hogs. They were not to be found this morning.

On the afternoon hunt Collin and Clesson returned to the same ground blind. (I have a picture of the guys setting up this blind on the afternoon they arrived — when the weather was in the 70’s.)

A little before 6:00pm they saw a lone hog walking in the cedars and coming in their direction. Clesson got ready in case he had a shot opportunity. The hog was on a trail that passed in front of the blind, when the hog walked into the clear Clesson took a shot. The hit was further back than intended and the hog left in a hurry.

An hour later a few hogs came from the opposite direction and went to the Hog Nut and got busy. Clesson took careful aim at a big black hog and shot. His arrow hit behind the shoulder. The hog ran the hunters thought they heard it go down close by.

Scott hunted a different area this afternoon and I picked him up at dark. He saw lots of deer and some wild turkeys where the Hog Nut was scattered. Some hogs had been in the area but came up behind him and wouldn’t go past him. None were in bow range. We went to the blind where Clesson and Collin were.

The big black hog was an easy find, nose down 50 yards away.

Then we took up the track of the first hog. It left a sparse blood trail that took us 400 yards into a dense cedar break and then the trail played out. We marked where we lost the trail to help us find it in the morning and  returned to the blind and the black hog.

Clesson’s arrow was still in the hog and when he pulled it out we all looked it over. The broadhead was the new Toxic Broadhead and it made a wound channel that shredded through the hog’s meat and lungs. 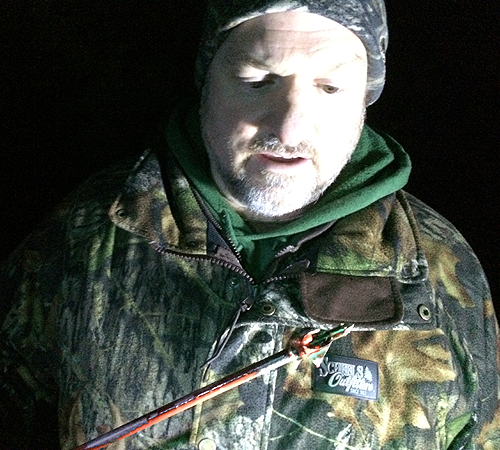 The Toxic broadhead inventor, Chris Rager, calls this shredding “meat worms” and that is what it looks like. It’s a vicious looking cut and it put this big hog down fast.

Collin and I took a few pictures of Clesson with his big hog with our iPhones. 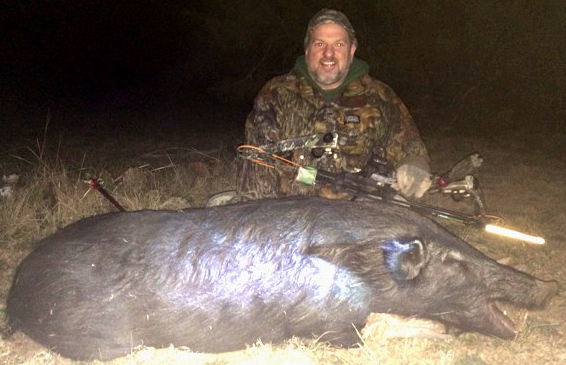 After the pictures I suggested we wait until the morning to butcher the hog and take some daylight pictures. The temperature was still in the teens so the meat would definitely stay cold. We loaded it in the back of my pickup.

The guys were tired but I insisted we observe the long standing tradition of a Celebration for the successful hunt.

We went to the 36 again. They were almost ready to close but they seated us and took our orders. Congratulations Clesson.