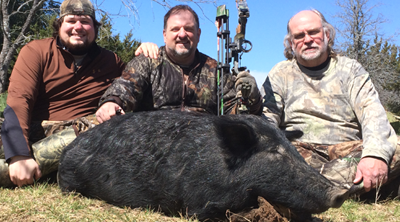 Our Minnesota bowhunters Clesson and Scott got out to their blinds before daylight and waited. They saw deer and wild turkeys that came to the Hog Nut spread out near the blind, as well as a few wild hogs that passed through their respective areas at a little too far for a bow shot.

Last night we set the hog up in the back of my pickup, tucked his legs under him and posed him for pictures — which we would take during daylight the next morning. And don’t worry, there was no problem with the meat spoiling, the temperature was in the 20’s.

When the guys finished their hunt I joined them and to take pictures. Clesson wanted to have a picture that had cactus in the background so I drove to an area that has them.

And then they wanted to take pictures all together.

With the pictures done, Clesson and Scott butchered the wild hog and took the meat to Collin’s house and refrigerated it. If there was time after the afternoon hunt, it was gonna be the main course for dinner tonight.

The afternoon hunt was similar to the morning hunt, deer and wild turkeys in the immediate area and wild hogs out of bow range.

There was also a surprise visitor, a Texas Longhorn. 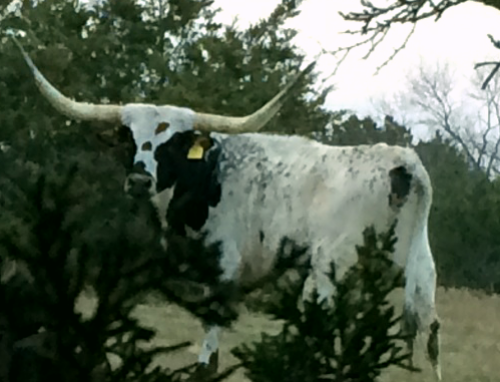 After their hunt Scott and I followed them over to Collin’s house. Clesson got the coals in the grill going and cut up the chops (known to us hunters as the backstrap) and dipped them in some concoction of his own creation.

Clessoin cut the individual pieces of backstrap into smaller pieces, dipped and seasoned them and placed them on the grill until they were just like he wanted them. Then he seared them in on the stove.

We also had real baked potatoes (cooked in the oven not the nuker) and a pot of Bush’s beans. The meal was off the charts good; and a perfect ending to a nice day in the wild hog, deer, wild turkey and Longhorn cow woods.