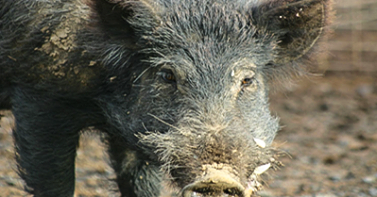 During the morning bowhunt Clesson and Scott saw wild turkey and deer activity around their separate hunting areas but no wild hogs. Collin had business work to do and couldn’t make it out for the morning hunt.

After Scott and Clesson finished their morning hunt the 3 of us went to Hamilton to the Aristacats Restaurant. We arrived a few minutes after the close of breakfast hours but Kelsey took our orders and made sure we had a great breakfast.

That afternoon Collin and Clesson hunted in the blind at the Wallow On The Hill where Clesson arrowed yesterday’s pork chop dinner. First, they hit the wallow with a generous supply of Hog Nut — in the wallow 15 yards from the blind. The afternoon hunt was on. Scott went to the “L” blind hidden in some trees by an active hog trail.

None of us knew it but, later in the afternoon, hog wise, things were going to get out of hand at the “Wallow”.

It was slow all day but that was changing … right now.

At Hog-30 cows came out of the trees and found the Hog Nut. The guys didn’t want that and Collin scared them off by grunting and waving his hands in the blind’s main viewing window. Soon the cows returned so Collin got out and ran at them and they left. With all this commotion, they figured the afternoon hunt at the wallow was basically over. So they decided to leave the blind earlier than usual. With a little daylight still left, they might be able to shoot a hog on the way to the truck. They both got out of the blind.

Abruptly, they heard LOUD grunts behind them. An instant later a large group of wild hogs come out of the cedars directly at them. Without delay, Collin dove head first through the still open door of the Ameristep Carnivore blind. His dad hurried in behind with bow in hand.  The hogs scrambled by the blind and went straight to the Hog Nut and gluttonously waded in.

Hastily, Clesson got in his chair; more wild hogs zoomed right past the unclosed door of the blind, less than 5 yards away. Fortunately, Clesson zipped the door half way closed and hooked up his release to prepare for a shot. He took aim at the biggest hog of the group and let his arrow fly! A fierce squeal sounded and the hog was gone in seconds.

Earlier Collin had put on his release — just in case there was a chance for a wild hog double. Both he and his Dad shoot the same draw length bow, so they could share the same bow if the opportunity came. And that opportunity was here now. 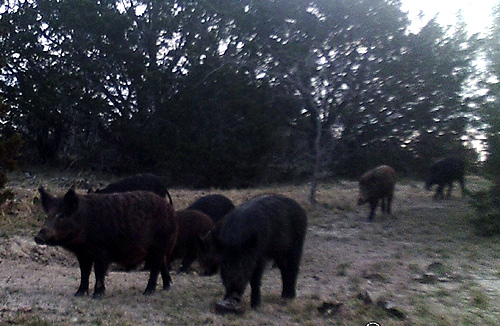 Noiselessly, they switched spots inside the blind. The hogs were moving around and when Collin saw an opportunity at the biggest hog he took his shoot. But a smaller hog jumped in front of the arrow. It ran to some nearby trees and went down. The remaining hogs scattered into the nearby cedars … except for one.

The biggest hog bellowed fiercely. And charged around the immediate area menacingly, going to the hog Collin had shot and returning to the blind; angry, threatening, intense and growling and grunting warnings all the while.

Some hogs returned to finish off the Hog Nut feast. But others circled around the blind, threateningly. Clesson  and Collin were a little freaked out — surrounded by hungry and angry wild hogs.

Meanwhile, I was in my pickup 2 miles away, watching daylight’s last rays fade, waiting to hear how the afternoon hunt had been. Collin texted me, “Hogs are pissed. All around us. Hurry!”

This was not my first creepy encounter in the wild hog woods, this was an urgent situation! The remote two track road through the woods is rough … I took it at a risky speed.

It was pitch dark when I saw Scott’s flashlight waving by the road, he jumped in and I and gave it the gas up the last rugged hill. When the hogs heard my pickup and saw my headlights they scattered.

We recovered Collin’s wild hog only 30 yards away. The second blood trail led us into thick cedars and we lost the trail. We decided to look for the hog the next morning because Collin had to pick-up his step-mom Sharon & little sister Gracie at the DFW Airport tonight.

While Scott and I went to the 36 and ate dinner, Collin and Clesson were on their road to Fort Worth and a 5 hour trip.