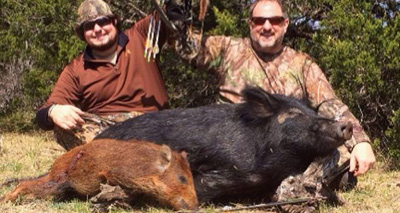 Day 5: A Late Morning
The hog hunters all slept in after coming in late from the DFW airport. Unfortunatley I was busy almost all day so I missed out of some of the events. The three of them went to the blood trail where they lost the trail last night and looked for a while. No luck.

Then, Collin found a couple of large piles of wild hog crap on a trail under two large, low hanging cedar limbs. The next thing he noticed was the wild hog snuggled right up under the dark branches, hidden from their initial view, they had actually walked by the wild hog several times. It was a nice sow, Clesson’s second hog of the hunting trip. They set up their hogs and took some photos.

Then they skinned & butchered the hogs and took the meat to Collin’s house to clean and get it iced down. They took a short nap and headed back for the afternoon hunt.

Afternoon Hunt
Clesson sat in the Food Plot blind and Collon sat with Scott at the Wallow on the Hill. They hoped we could get Scott on some hogs at this hot spot, since it was the last hunt of the trip. Before getting in their blinds they put out more Hog Nut. (It is amazing how well this mixture of sweet smelling goodies works in the wild hog woods. It absolutely makes wild hogs totally ravenous for it and InSights Nutrition’s Hog Nut was definitely an asset to this hunt.)

It was a nice quiet afternoon. But no hogs came there that afternoon.

Just before dark Collin received a text from his Dad that he had smoked another hog. The shot looked and felt good. He and Scott went to the truck and drove over to help track the wild hog.

The initial blood trail was okay. But then it all of a sudden stopped. They looked for a good 45 mins or so. Nothing. Not even the arrow was found, it was still in the hog.

They took one more look around before packing up and returning to look in daylight tomorrow morning. But, Collin noticed found a small drop of blood on a rock, about 40 yards from the last blood and we were back on a trail. It ended after 20 yards at a large bunch of thick, dark cedar trees on a slightly steep hill.

The hog was headed in the direction of the river. Clesson shown his flashlight into the cedars and saw his reflective arrow wrap in the thick trees … shining dimly. They went further into the trees and pulled the hog out. Another large wild hog for Clesson. His 3rd hog of the trip.

What a way to end the hunt. They met Sharon, Gracie and Ashton at the Junction on 36 to celebrate.

The three came back the next morning to take photos and butcher the hog. What a great  hunt this was with great memories made. Clesson and Uncle Scott returned home with plenty of wild hog chops, steaks and hams. They are already planning on coming back next spring.