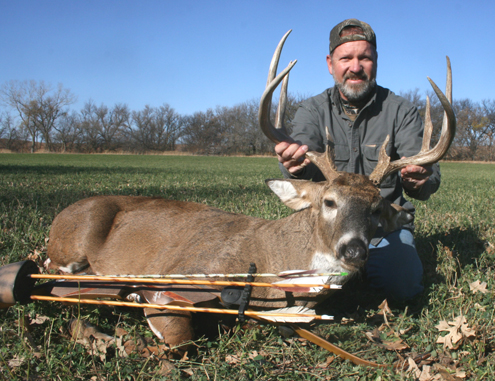 New Mexico bowhunter Jim Willems is the newly elected Pope and Young President. He ran an anti-status quo campaign, promising to re-energize the organization and involve members more in the Board’s decision-making. A first time candidate, Willems struck a responsive chord with voting members critical of the former administration.

THAT RUMBLING TREMOR felt by some North American bowhunters on Sunday, March 2, was likely an aftershock from the earthquake rattling the foundation of the Pope and Young Club’s Minnesota headquarters. That same March evening, when all ballots from the 2014 biennial election had been counted, there was no mistaking the voting members’ loud, clear call for substantial change in P&Y direction and leadership. And after the dust finally settled, one candidate summed things up nicely: “I think a lot people went into shock when election results were announced.”

Actually, that comment may be an understatement. Incumbent President Roger Atwood, who succeeded me as Pope and Young President in 2010, was seeking a third two-year term. Yet first-time P&Y Board candidate Jim Willems, a veteran New Mexico bowhunter and retired businessman, handily won that matchup. The new First Vice President is Michigan-based Tom Nelson, an experienced and popular P&Y Director who’d decided to move up the Club’s leadership ladder by seeking the VP seat held by Glenn Hisey, ran unopposed. Hisey, the Club’s longest-serving Board officer, had declined to run for another two-year VP term, vying instead for a four-year Director’s term. He lost his bid to remain on the Board by finishing third in voting for the two open Director seats. Incumbent Director Doug Clayton of Iowa won his own re-election effort, and newcomer Todd Brickel, a Colorado-based bowhunter also making his first try for P&Y office, claimed the remaining Director’s slot. Simply stated, a clear majority of P&Y voters rejected the status quo and removed or demoted the Board’s two top officers, signaling they wanted fresh leadership and new ideas.

Lastly, another Coloradoan, John Gardner, easily won re-election as Second Vice President. He will continue representing the Club’s thousands of non-voting members for the next two years. Roger Atwood will remain on the Board as Past President, filling the Board seat I’ve occupied for the past four years following my Presidential tenure (2006-2010) . Two previously elected Directors, Jay St. Charles of Washington and Dirk Dietrich of Colorado, have two years remaining on their four-year terms.

Especially noteworthy is the fact that incoming P&Y President Willems will now appoint or reappoint five additional Board members – P&Y Executive Secretary, Treasurer, Conservation Chairman, Membership Chairman, and Records Chairman. All indications are some additional changes will be made through these appointments, which means the new Board could feature four to six fresh faces when its spring meeting is called to order on April 10.

“I don’t propose radical changes within the Club,” Willems said following his victory, “but I do intend to aggressively move toward re-energizing the organization. There has been plenty of input from members concerning the direction they hope to see us take, and I will listen to everyone’s ideas. I plan to be open and available to all members and seriously consider all views.”

Such words are music to the ears of any dissatisfied P&Y member who believed the former Board simply was not listening to their concerns and ideas.

SO EXACTLY WHY AND HOW did this major shakeup come about in a P&Y election that saw 82% of all eligible voters cast ballots? Obvious clues are found in the well-planned, well-executed campaigns of the two first-time Board candidates – Jim Willems and Todd Brickel — whose dominating victories rocked bowhunting’s premier record-keeping organization. Interestingly, all three re-elected Board members ran on a platform of positive change.

Willems had launched his quest for the Club’s top office with a blunt statement: “I strongly believe the Club is in trouble, dying a slow death, and the only way to fix the problem is with new leadership.” He backed up his claim noting an “alarming” loss of members, from more than 8,000 in 2007 to about 6,300 at the end of 2013. He also pointed to an “image problem”, namely a public perception that the Club is an elitist, traditional-based organization that’s lost touch with many modern bowhunters, especially the younger generation of hunting archers. He compared the P&Y leadership to a “Good Old Boys Club”, citing a bloc of officers who didn’t allow motions they opposed to proceed to a vote by the entire membership. (Note: It now takes a two/thirds majority vote, rather than a simple majority, to advance Board motions for membership approval or rejection.) He was critical of the most recent membership meeting at last year’s Dallas convention, calling it a waste of time and “so finely orchestrated with speakers to allow absolutely no input from members”. Willems promised if elected to be far more responsive to the membership. He also noted a prevailing “anti-archery industry” mindset among many officers, something that led to their opposition of some suggested changes involving modern equipment, notably high bow-mounted cameras and lighted nocks.

“For the last 31 years I have mostly hunted with recurve bows and cedar arrows,” the new President explained, “but it doesn’t matter to me as long as you hunt ethically and respect the animal you are after. We squabble over electronics on our bows and arrows while some Club leaders have no problem with many other technological advances like electronic feeders, trail cameras, scent-lock clothes, electronic scent eliminators, and mechanical broadheads. This adds to our image problem, which is a turn-off to new members.”

“I don’t use lighted nocks personally, so it’s no big deal to me, but it seems you can’t watch a TV bowhunting program today that does not show them. Part of the mystique of archery is watching the flight of an arrow. A lighted nock makes it much easier to see the arrow in flight and is really kind of cool to watch. I can see its allure, but I don’t see how it affects fair chase one way or the other.”

Willems also has voiced his support of Board member term limits and repeal the Board’s existing two-thirds majority rule that recently blocked the voting membership from accepting or rejecting lighted nocks.

THE OTHER P&Y BOARD NEWCOMER, Todd Brickel, earned his Director’s seat after personally contacting hundreds of voting members by phone or mail and asking for their thoughts and suggestions. His candidate’s message was plain and simple: “I don’t intend to remake our Club; I just want to make it better”. He expressed his belief that select changes will make the Pope and Young Club stronger and “the undisputed leader in all things important to bowhunting.” Brickel also stressed the importance of two-way communication that starts with the Board but the membership having “more of a voice in the direction of our Club,” including more decisions put to a vote by the Regular/Senior membership. Brickel also promised to seek more transparency where Board member voting records are concerned, along with possible restructuring of the Club’s Board of Directors and a look at term limits.

Worth mentioning is the fact that newly elected Vice President Tom Nelson and Director Doug Clayton each won by calling for more Board transparency, member input, better communication, term limits, and changing the “no electronics rule” to allow lighted nocks, and consideration of other possible electronic exceptions on a case-by-case basis.  Nelson, who as Co-Chair of the P&Y fund-raising auctions at the last four biennial conventions has helped generate some $600,000 in revenue, seeks to rebuild the Club’s relationship and the Archery Trade Association and certain members of the archery/hunting industry, putting to rest the belief the Club is anti-industry, while opening the door to sources of considerable revenue. Clayton, who had successfully pushed to establish an online P&Y Member Forum, promised if re-elected to improve communication between the Board and membership through regular surveys and occasional strategic planning sessions.

Of course, the eventual outcome of the recent election and all the campaign promises will not be determined for some time. Meanwhile, it’s safe to say that there are many Pope and Young Club members, bowhunters, and archery industry folks watching with curiosity and interest to see if proponents of change will win out over change-resistant skeptics apparently satisfied with Club business as usual.

NOTE: For more information about the Pope and Young Club, whose stated mission is “To ensure bowhunting for future generations by preserving and promoting its heritage and values”, visit the organization’s website: www.pope-young.org. For additional details, write or call Pope and Young Club, 273 Mill Creek Road, P. O. Box 548, Chatfield, MN 55923; (507) 867-4144. The email address is admin@pope-young.org. Also, the impressive Pope and Young/St. Charles Museum of Bowhunting is open to the public six days a week at its Chatfield, MN, location some 16 miles south of Rochester. Admission is free.