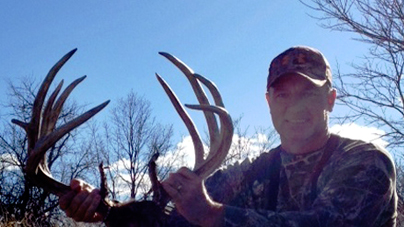 Bill Schulthies and I tested the new Toxic Broadhead by Flying Arrow Archery prior to the 2013 hunting season. The test results were impressive in all three important categories: Accuracy, penetration and hemorrhaging ability. We learned that Toxic Broadheads do indeed have a unique design that delivers lethal and deadly, bone crushing penetration with a silent flight. With its patent pending blade design, the Toxic broadhead provides a massive wound channel that looks like meat worms, which deliver phenomenal blood trails.

Both Bill and I had good success this season using the Toxic broadheads. I shot a doe and a dozen or more Russian boars and Bill shot a doe and massive Kansas Buck. Let’s look at the hunt that produced a massive 173 1/8 inch Kansas buck.

Bill was hunting his central Kansas lease on November 10, 2013. He decided to hunt the north wheat stand which is an elevated tree stand about 25 feet in the air. This stand overlooks a volunteer food plot that was planted in wheat the previous year, with thick woods on three sides. He picked this particular stand for the morning hunt because it’s easily accessible without disturbing the deer and hunts well with a southwest wind. Bill’s son was back from college this weekend and hunted about 400 yards away in their red oak stand.

They got in their stands at 5:55am and awaited the upcoming sunrise. The wind started to change around 6:30am and Bill considered changing stands. He opted not to since he had his Ozonics scent eliminator and confidence in his scent control regime. Good thing he did! At 6:50am Bill caught movement across the field in the woods. A few seconds later a large buck jumped the fence and was standing at the edge of his field at 50 yards. It appeared the buck was trolling for does and started to head north along the edge of the field in Bill’s direction. Bill knew this was a trophy caliber buck and was at full draw when the buck hit 45 yards. At 40 yards the buck sensed something was not right and got real alert to the situation. Luckily, the buck walked towards Bill to see what had changed in his domain. After another 15 steps with only a head on shot, the situation was getting very intense.

Bill was waiting for a broadside shot. The buck finally presented this at 25 yards and it was now or never as the buck was extremely aware that something wasn’t right. Bill knew within seconds the buck would bolt, so he released the arrow!! Although he was not 100 percent sure, it seemed like a decent hit. The buck quickly turned 180 degrees and bolted back a long the field edge 130 yards and then jumped into the woods. Bill waited in the stand until 10:00am. This was a very intense wait. Going back over the shot while anxiously waiting, doubt entered his mind. Maybe it wasn’t as good of a shot as he had hoped.

Trusting his instincts, Bill decided to head back to camp and waited until 3:30pm to return to the woods. He would have preferred to have waited even longer but his son had to get back to college and they were forced to leave that night. Upon returning to the site where he had last seen the buck, he immediately found his arrow which was coated with deep dark purplish blood indicating a liver hit. This confirmed his fears about the shot being a little further back than he had wanted. Although, still in the vitals, he knew with the angle the buck was at, the arrow would have a tough time exiting through the hip area. He did find pools of blood and so was hopeful the Toxic broadhead would do its job and cause significant hemorrhaging.

The wooded area the buck was in was thick with brush and trees and visibility was limited making it hard to walk much less find the buck. Luckily the pools of blood were consistent enough that he was able to retrieve his massive Kansas buck.

The Toxic broadhead had entered the buck behind the front shoulder and quartered through the mid section and ended up lodging into the big bucks hip bone.

This was a memorable hunt for Bill, who is a very passionate and skilled bow hunter and has many monster whitetail bucks on his wall to prove it. Spending time in the Kansas woods with his son and the opportunity to kill a Trophy caliber buck like this made it one of those memorable experiences that they will both cherish for a lifetime.

Want to find out more about the Toxic Broadhead? Just go to: Flying Arrow Archery