Travis and the Buck They Called ‘Ginormica’

by Jason Houser
in Bowhunting Posts
0 0
A A
0 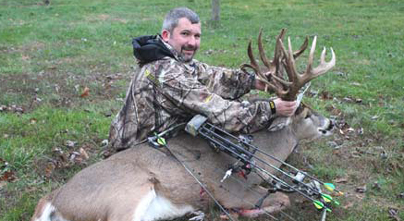 It was the first year Travis Cockburn used trail cameras on the Williamson County farm in Illinois he and his family hunts. What he saw in mid-August of 2011 changed the way the family would hunt come October 1st, the first day of Illinois bow season.

Many trail cam photos were taken of a giant “Booner” during the summer months that was quickly nick-named Ginormica by Travis’s eight year old son.

Travis, his dad, brother and nephew quickly focused their attention on learning what they could about the big buck. The only problem was that the only photos gathered were taken between 2 and 4 in the a.m. hours. However, there was one sighting of the monster by a coon hunter in the wee hours of the morning.

Focusing on killing the book buck, the foursome started making plans as to where they could hunt.

Tired of being out done by shotgun hunters, Travis decided to take his own gun out of the closest and see if he could connect on a nice buck. In surprise, Travis connected on a big nine-pointer. The season was just beginning however.

Throughout the bow season Travis saw some Pope and Young class bucks but none ever presented him with a good shot. He did however draw on a couple of nice does that made good table fare. Frustrated, Travis still saw no sign of Ginormica.

Not one to give up, Travis continued to scout for the big buck and eventually came across two main trails that intersected at a scrape the size of a small Volkswagen. This had to be Ginormica he thought.

Travis spent quite a lot of time searching for a tree suitable for his Summit Viper Climber Tree Stand. Unfortunately, a few years before, a bad storm had toppled most of the trees on the farm making finding the perfect tree that much more difficult. Then, on Thanksgiving Day he was finally able to find one tree that was only 35-yards from the car size scrape and 20 yards from a nearby creek crossing, things were looking up. There was no hunting that Friday or Saturday either due to heavy rains and Sunday morning, November 27th, the Cockburn family made their usual journey to church.

After arriving back home the rain had stopped and Travis had to decide whether to hunt, watch football or take a nap. Fortunately for him, he decided to camo up and go hunting.

By the time Travis decided to hunt at 2:15 in the afternoon, the rain was all but gone. This would be the first time in the stands by the big scrape. The rain made the woods deafeningly quiet, allowing Travis to hear everything. Unfortunately, he was not hearing a sound.

Finally he spotted a big bobcat and after five minutes of a stare off, Travis was able to wave the cat good-bye.

Being bored with no action in the area, Travis texted his good buddy who was hunting a few miles away. It was now 3:45 p.m. At 4:15 Travis heard splashing sounds coming from the creek behind and to the left. Turning slowly, he saw a huge buck knee deep in the water.

Twenty seconds passed before the big buck exited the water and presented a broadside shot at 15-yards. Still not knowing it was Ginormica, Travis settled his sight and released his arrow. With a loud thud the Carbon Express arrow hit its mark and sent the buck kicking into the air. Travis was able to keep an eye on the monster for about 50-yards, before losing him in the thick brush.

Texting his buddy, Travis excitedly relayed what had just transpired. Finding the arrow coated with good pink blood Travis was certain the pass though had taken both lungs. Wanting give the buck adequate time to expire Travis returned home and went to church with his family. Sitting in church he played the shot over and over again in his mind. As soon as church was over Travis contacted his father and brother to help with the recovery.

About 5-yards from where the buck was shot they found the beginning of a good blood trail. Excitement built in the Cockburn family as they took up the tracking job and followed the crimson trail into the brush where Travis had lost sight of buck. Twenty yards later they found the buck they had named Ginormica. 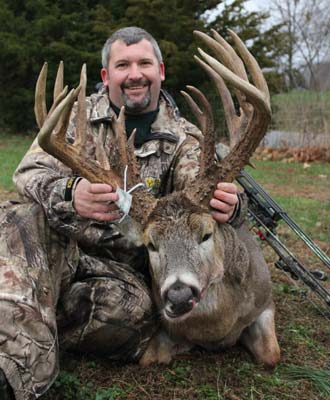 In awe they looked at the buck and after congratulations and back slapping they field-dressed and with four friends in tow the five men dragged the once-in-a-lifetime buck out the thickets.

With numerous people counting tines, all with different numbers, the final count was 29 scoreable points. If it was not for a broken G-5 on the left side, it would have been the 30-point buck.
With bases measuring 8 ½ -inches and 7 ½ -inches this was the largest deer killed in the United States for 2011-2012 deer seasons and measured 261 5/8-inches. The largest tine measured 12 ½ -inches, and the smallest mass circumference was 5 ½-inches.Travis’s persistence paid off, and I cannot think of a more deserving hunter.

This deer was recognized as the top non-typical whitetail at the Pope and Young convention held in Dallas, Texas for 2011-2012 seasons and is the fourth largest bow-killed buck in Illinois history. I had the pleasure to visit Travis at his home and hold this massive rack. It was an experience I will never forget.