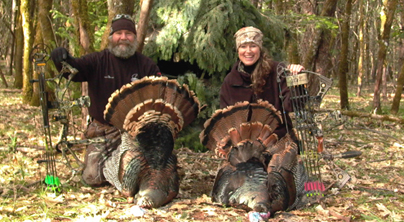 Being a student in the “School of Hard Knocks” has always been a lifestyle for me. Through all of the subjects on my schedule there has been a particular class that has schooled me more than the rest. No, this is not the class on understanding women. However I believe that maybe I have finally earned my cap during this past Spring semester. At least maybe I can scratch my gray head a little less and study for the “understanding women” class a little more…that is while I still have some hair AND butt left. Let me explain.

Through all of my years of studying the Great American Wild Turkey from the Atlantic to the Pacific and all the way into cactus country I have compiled so many mishaps and follies that I refuse to remember most of them. I’ve worn out many boots and drawing boards trying to develop a strategy for consistent success against these wary creatures. During this I finally realized that there isn’t a consistent strategy when it comes to hunting turkeys. However, through all of my travels I have earned some very special memories that stand out far and beyond all of the others. These are the ones that I remember well, for they are the ones that I believe helped earn me my stripes.

This year provided me with two of those outstanding moments that I will cherish forever.

The first came on the third day of Spring Turkey Season when I reached a personal milestone by taking my 100th turkey with a bow. It has been a long journey and I never fathomed that this day would ever come. Going back to the prior season, when I realized I was knocking on this door I developed such a bad case of butterflies that it kept me awake many nights. This reminded me so much of when I was a little bambino waiting for opening day to hunt with my Dad and Uncle Joe.

By the time opening day arrived this year I was once again rummy and delirious from the thought of it. When my shot opportunity finally presented itself I needed more than normal deep breaths and closed and opened my eyes repeatedly until I could focus enough to draw my Bear Motive and settle in. I whispered out loud to myself and prayed for a good release. Suddenly I was that little kid all over again. I went from a potential grad student to elementary school and back again like I was in a time warp. When I finally did release and watched my arrow reach its destination I literally collapsed to the floor of the blind. I never realized a single shot could take that much out of me.

When realizing it was over I drew myself up, quickly recovered and after a brief Indian prayer, busted from the blind and began dancing around my trophy. While Lisa had the camera rolling she called me ‘Loco’ for turkeys and hence came the new team name for me and my bow…the ‘Loco-Motive’. It fits because the bow actually does hit like a train. The celebration eventually wore off and we continued on into the magic of the season.

Lisa continued her reign over these tricky gobblers by center-punching back to back birds in a matter of a week. Her ability to focus on such small kill zones is uncanny, especially shooting from such odd positions. Her dedication to the sport is paying off with huge dividends as she is developing into a pure bowhunter right before my eyes. As a result of her determination the accolades have become bountiful.

As we approached May we made a commitment to some dear friends to video our remaining hunts by using two separate blinds for a different effect while hopefully giving a better presentation on how well the Blind Web and the HECS Stealthscreens work.

This application was a first for me so I was a little uncertain of the outcome. After locating a roost that was holding a large flock we erected a stand well outside their safety zone on the eve of our morning hunt. We strategically positioned one blind for the camera and one for the shooter and then thoroughly brushed them in using Blind Webs and surrounding foliage. I finished up as the sun set by putting my decoys in place.

I had previously customized my tom by adding a real fan and hand painted it with metallic model paint and deep gloss black on the eyes. I then staked him into a rim of an anchored lawnmower wheel so he would swivel on the ball bearing axle with the slightest breeze as the fan acted as a wind sock. After covering the wheel with grasses I placed my custom hen in accordance with the tom’s position. She also had a real tail and a trick paint job. ‘Elvira’ came from the factory with a motion head so I improvised a little more and attached 4lb. test monofilament to the pull cord and extended it along the ground 20 yards through eyelets to the camera blind where it was attached to a miniature fishing pole and ultralight close-faced reel. I know this all sounds a bit unorthodox but it works and I love fishing for turkeys anyway. The stage was set and now all that was left was for Mother Nature’s curtains to open.

The next morning we arrived with eager optimism. As the crisp, cool dawn broke we could hear waking gobbles and yelps echoing in the distance. When I began chiming in with my own sequence of calls I could instantly hear wings whistling in the wind as the ‘B52’s’ hit the ground and were well on their way. I could hear the lead tom gobbling as he was staying ahead of the rest of the pack, as leaders do. He was on top of us in a matter of minutes, at a full run. Upon arrival he torpedoed my tom decoy like he was Ronnie Lott on steroids and Viagra. He continued his onslaught with pecks, purrs and scratches as my decoy rolled in the dust. He stopped momentarily and that’s when I put the brakes on his butt-whooping with a missile of my own.

Turkey #101 expired on sight which was exactly what we wanted for footage.

It was over at 6:15 a.m. After retrieving my reward I began narrating on the video on behalf of some great companies until I was interrupted with more gobbles. We immediately switched blinds and activated ‘Plan B’.

Before I could settle in and start my series of calls a lead hen waltzed in with her feathers sticking straight out like she pee’d on an electric fence. With her chest protruding she approached my hen decoy while growling cuts and fighting purrs. I automatically locked the camera on the tripod, grabbed my fishing pole and began trolling for some entertainment. Wow did she take it, hook, line and sinker. When the decoy’s head started bobbing this gal came unglued and we were now witnessing an incredible cat fight. She tried so hard to peck the plastic eyes out of ‘Elvira’ she probably still has an Excedrin headache. Throwing in my own fighting purrs increased the action and added more salt to the wound as she kept bouncing her head off of the plastic body like Elvira was wearing Knights armor. This went on for quite some time until she finally decided it wasn’t worth jarring her pea-brain with nothing to show for it. As she wobbled off like a drunk in a stupor a curious doe appeared out of nowhere before I could begin calling again. For whatever reason this deer decided to hang with the beaten decoys and feed off the moss that was on the cut limbs that I brushed the blinds with. She was so close I could have reached out and petted her a few times over. She definitely smelled us but I believe she simply wasn’t alarmed because our amazing HECS suits. She eventually finished her snack and calmly moved on to her resting grounds. The phenomenal video footage was more than we could have ever asked for.

Finally I seized the opportunity to begin my calls to my other fine-feathered friends. I reached out with some strong yelps from my field box call and bingo the game was on again. Without exaggeration Lisa’s tom responded exactly like my earlier tom with instant gobbles as he raced in like his fan was on fire. He also ‘B’lined it straight to my tom decoy like he was on a zip-line and immediately tackled it with his wings. Fight #3 was even better than the first two until Lisa cut it short with a perfect kill shot that once again dropped her target right on the spot.

This crazy morning was more than we could have ever dreamed of and it was all on film! Lisa was so overwhelmed with excitement that once the dust settled she tried to anxiously get out of the blind through the window of the Double Bull ‘360’ only to collapse it and break 3 rods! Yes I captured this on film too. The hunt was finally over at 8:35a.m. and we were left with staring at each other in disbelief. This was the 7th ‘Daily Double’ that Lisa and I have hit together and was by far the most memorable. There just isn’t enough money that could buy this condensed action and you know the memories that will last forever.

As a proud graduate I can only say that these special moments would never ever happen if we didn’t utilize the incredible products offered to us with the best of our ability and to do it with thought, ingenuity and improvisation, as successful hunters do. One must always adapt and conform to the habits of the wildlife we hunt with all of the power in our beings. Never limit oneself to the norm and be resourceful within reason. Expect incredible experiences as your compensation, and may these priceless memories take you to your own graduation.