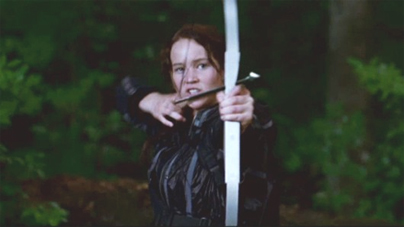 There is not a culture on Earth that has not been touched by the bow and arrow. From pre-history through the modern day virtually every human being on this planet knows what a bow and arrow are and the basic principles to make the system operate; pull string back, let go, hit distant target. Because of these truths it is understandable why the bow and arrow has appeared in film since film began and in marketing campaigns for so many industries throughout the modern age.

Hollywood and Madison Avenue have always been a part of our world whether it has been to tell a story of heroes or emphasize how owning the latest and greatest thingamajig will allow you to reach your intended goal, usually, visually represented by hitting the bullseye. Often times these images and representations of our sport go virtually unnoticed or at the very least act as peripheral attention getters soon to be forgotten, but it seems that 2012 is the year of archery. To date archery has been featured in the highest grossing films, not as peripheral elements, but as key elements of the story and characters. Let us be the first to proudly and publicly extend a hearty WELCOME to Hollywood and a huge Thank You to those who have taken the time to accurately represent the sport in their creations. To those that haven’t paid as much attention to the mechanics of archery, but still heavily feature it in their films we also thank you, but we would also like to extend an open hand and say let us help you make your next endeavor even better.

The numbers are staggering and cannot be ignored. Since March 23, 2012 three movies, Hunger Games, The Avengers, and Brave have featured archery. In just four months these movies have generated 2.5 Billion dollars in revenue world wide and 1.25 Billion dollars domestically (figures accurate as of Aug 5, 2012). At $10.00 per ticket that translates to 250 Million people worldwide and 125 million people domestically who have seen the sport of archery in less than 120 days. If even 1% of those viewers are sparked by the movies to try archery rest assured they are coming. Whether those people come to the range because they want to be Hawkeye, Katniss, or Merida they are at the range raring to try their hand at archery. To the archery industry I say Welcome to Hollywood. The power of global Hollywood has given the sport a great gift and we better be willing and able to turn this gift into a sustained growth opportunity.

Now that the Olympic Archery events have passed us by and the ratings numbers are infrom NBC there can be no disputing that Hunger Games, Brave, and The Avengers, as well as upcoming shows Arrow and Revolution have had an unprecedented, positive impact on the sport. Averaging 1.5 million viewers Archery coverage beat out Basketball as the top non-broadcast network coverage sport according to MSNBC and NBC executives. The magnitude of this opportunity cannot be overstated, but the results remain to be seen. It would be prudent for the Archery Industry to scale back the preponderance of 70lb bows and prepare for bows from 20 to 50lbs as well as become creative in capturing the interests of the vast new demographics entering the sport. One critical factor is that average costs for new archery equipment will make it cost prohibitive for these new participants to enter the sport. We must do something to bring down the average cost of bows and equipment.

All the archery clubs in America and their volunteers can only do so much to bring these new shooters into the sport and keep them there. Don’t get me wrong – this is not a call to stop pushing the performance envelope and innovate. It is an acknowledgement that the getting back to the basics so every demographic, from kids to first time adults, have access to the reasonably priced equipment that is necessary to enjoy the sport. After all, today’s $100 bow sale can translate into tens of thousands of dollars in bow and accessory sales. But that will never happen if we don’t provide a first, economical entryway into the sport.