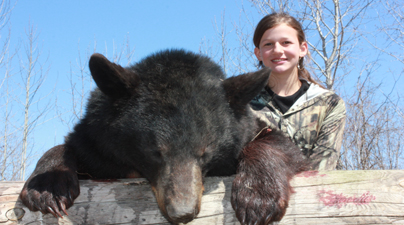 The experience I had this Spring was one of the best hunting weeks of my life and I didn’t even harvest an animal. I traveled 24 hours north to Delta Big Game Outfitters in Cumberland House, Saskatchewan with my 13 year old son, Tekoah, and my 12 year old daughter, Baylee. In fact, Baylee’s birthday was on May 5th and she hunted the next day.

Our hunt put us in the middle of the largest inland delta in North America. This is the only part of Saskatchewan that has a growing bear population. The province did research last year that had this area on track for a 45% growth among black bears. The outfit’s 1100 square miles holds so many bears that hunting is the only real method to control their population. This was the destination of our bear hunt.

Baylee had only ever shot a turkey. She did so just one week earlier, taking a 9 ½ inch Merriam Turkey in our home state of Colorado. This bird marked her first hunt and sparked a desire in her for hunting all animals. All three of us had tags but we decided that since Baylee had never hunted a bear before that she would be first to hunt.

The first night out was a bit slow. Saskatchewan was experiencing the latest Spring in 50 years. This cold weather still had most of bears in their dens. The weather had broken the day before the opener and it was 70 degrees, but there was no movement. Usually by this week we see 4-6 bears a day with Delta Big Game Outfitters. We did not see a thing.

The second night was equally slow. No bear movement. Although it warmed up during the day, we had a clear sky and it got very cold as soon as the sun was behind the trees. Baylee and Tekoah did a great job of handling the weather and we were shut out on day two.

We decided on the third morning to change things up. We went to a different stand and hunted the morning. Usually there is no need to even hunt the morning because you see so many bears each evening. It was a crisp morning and both kids were pretty cold. Hand warmers helped them through the slow morning. Then at about 9 am Baylee said, “Dad there is a bear.” Sure enough a bear had sneaked in to about 40 yards through the thick brush and was eating something it had buried. It would lie down and eat and then stand up again, but was not moving towards us. This went on for about 15 minutes. Our anxiety was growing and it was evident by the shaking legs in the stand. I have to admit that my legs were shaking, too, for this exciting moment.

Finally the bear committed to move toward the path that came right to our tree stand. It slowly moved forward and finally came out to 23 yards in an opening. It was curious since these bears in the delta don’t often see people. It moved to about 15 yards, but never presented a shot as it tried to discern what was different. The bear then turned around and went back toward the spot it originally exited the thick woods. As it went back, Baylee was ready and her crossbow was lined up right on the vitals. The bear turned around again to look at us and spun broadside. As it stood there, Baylee was steady and ready.

The bear was a young bruin and was now at 22 yards. I asked Baylee if she was on it with her 20 yard dot and she said that she was. I told her she could take it at any point she was comfortable. She took off the safety, steadied the bow, and shot. The shot hit the bear hard and looked very good. It crashed off hard through the delta and in just a few seconds we heard the famous bear death moan. The black bruin was down. We waited for Darrell, the owner of the outfit, to get to us and we tracked a tremendous blood trail 50 yards right to the expired bear. She had shot it right through the heart. Baylee had her first bear – a beautiful thick coat black bear. She was very excited and the pictures verify it with a huge smile.

That night we shifted gears and it was time for Tekoah to take out his bow. We sat out for two nights and the bears were just starting to get active. Tekoah had shot a great Pope and Young bear here last year with his bow and he was ready for number two.

We were down to the last night. We went to another stand location and we knew there was a bear that was coming in steadily. At about 8:20 I saw a bear way back in the delta and we were once again excited. It was so thick there that we didn’t see the bear again for a long time and began to wonder if it had committed to coming to the bait. We were quickly approaching our closing time of 9 pm. We were wondering if the bear had made another move. It was the last night and we were now within 5 minutes of closing time. Our prayers were increasing and the clock was moving.

At 8:57, all of a sudden, the bear showed up coming straight from behind the barrel. It moved right toward the barrel and sat broadside next to it. It was at 32 yards and Tekoah quickly steadied his bow, settled in his 30 yard pin and then shot. The bear ran off about 40 yards and scurried up a large tree. It had gone about 30 yards up this giant tree, death moaned and plummeted to the ground.

Again we waited for Darrell even though we knew the bear was done. We walked the 40 yards with our flashlights lit and there it was, a second beautiful black boar for the week and a second in two years for Tekoah. We were all very excited, especially in the way it came down to the wire. The shot was picture perfect and went right through the heart.

I have had many exciting hunts in my life. This hunt was riddled with weather issues that still had the majority of bear denned up. In spite of that, the week was fabulous. One of the other hunters in camp harvested a large 21” black bear and another hunter shot a beautiful chocolate phase black bear that was the largest color phase bear ever taken at Delta Big Game Outfitters. The other three hunters all had a shot opportunity and either passed or weren’t able to get a shot off.

For me, however, the slowness of the week was overcome by the time spent with two of my children on the hunt. Even if we would not have harvested these two beautiful bears, the hunt still would have been a success. We spent many hours in a tree laughing and talking quietly as we enjoyed all of God’s wonderful creation. The Double Bears were a rather large bonus to an already great hunt.

Matt Guedes is an avid hunter, an outdoor writer, a prostaff hunter, a game dinner speaker, and the owner of his hunting consultant business, Journey Hunts. Matt loves all that is outdoors and has been blessed to hunt and harvest many great animals all over the world. He now enjoys the role of helping many other hunters to experience great hunts at the best outfitters and safaris around the globe. Matt resides in Colorado with his lovely wife and three children. You can reach Matt at matt@journeyhunts.com , see his hunts at www.journeyhunts.com

Wolves - Once A Mongrel Always A Mongrel