by Sheryl Gallup
in Bowhunting Posts
0 0
A A
0 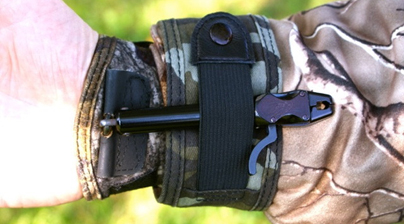 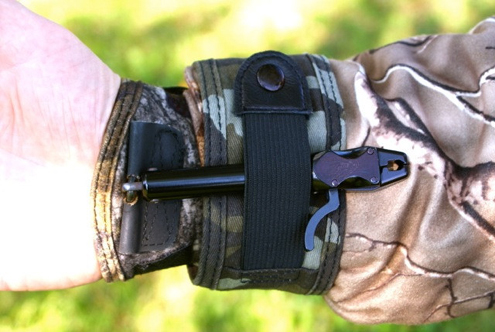 When hunting or stalking, nothing is more important than becoming as invisible as possible to the game that you are hunting. By preparing for the hunt, we enter the woods or fields feeling confident that we have the “edge”. Then you climb into your treestand and as you begin your ascent up the tree, the clanging of your bow release clangs against the tree and the treestand. Busted!

Game Slayer Hunting introduces the Release Catcher, the first wristband bow release catcher that captures your release and keeps it immobile and silent until you are ready to use it. Lightweight and comfortable, the Release Catcher fits around the wrist and secures your bow release magnetically in place, preventing the release from clanging against trees and equipment and keeps it silent while in a ground blind. The wrist strap measures just 15 inches and is made from durable, washable, cotton denim fabric. The lining is made from soft cotton, providing comfort between your wrist and the strap.

The Release Catcher installs in seconds with a wide Velcro strap that snugly fits your wrist. The embedded magnet grips your bow release and a 3” wide elastic strap snaps over the bow release and secures it your wrist. The Release Catcher also features a 2-3/4” elastic strap on the top of the wristband, making it a perfect place to hold your flashlight while field dressing game at dusk, for holding a game call, or pliers – all hands-free and silent.

The Release Catcher was developed by Game Slayer Hunting owners Michael Fensterstock and Mike Lerner. “Far too many times I have scared off game when I have been hunting by the knocking of my bow release on branches and my hunting equipment,” says Fensterstock. “One day Mike Lerner and I were talking and decided that someone needed to come out with a product that would eliminate a dangling bow release – so we decided it needed to be us and we got started on the design.”

It took about 4 prototypes to develop the Release Catcher before it was ready for manufacturing. “It seemed like such an easy concept and we were surprised no one else had come up with it already,” stated Mike Lerner. “We asked over 200 hunters to field test it, and our customers and our prostaff are thrilled with the ease of use and the comfort of the Release Catcher. They won’t hunt without it.”

The Release Catcher comes in Woodland Camo and Woodland Camo with pink trim. MSRP is $9.99. For more information, or to place an order, visit www.gameslayerhunting.com