by The Archery Wire
in Bowhunting Posts
0 0
0 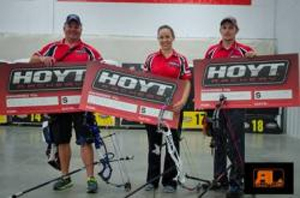 The First Dakota Classic was held this past weekend in Yankton, South Dakota, and Team Hoyt shooters were once again on top of the podium in the Men’s and Women’s Pro Divisions. The tournament, contested indoors at distances of 40, 50 and 60 yards is the 3rd stop in the NFAA 3-Star Tour, and also features a shoot-off for a brand new car for archers that compete in all three events.

Erika Jones, the #1 ranked shooter in the world and winner of the 2nd leg of the tour (NFAA Indoor Nationals), continued her hot streak with an impressive performance in Women’s Pro that would have placed her right in the mix with the top 10 men. Jones was 18 points ahead of her nearest competitor. Team Hoyt’s Jamie Van Natta took home 3rdplace in Women’s Pro. Both Jones and Van Natta choose the proven Hoyt Pro Comp Elite to take into competition.

On the Men’s side, two of the world’s best finished the competition tied, and the winner was determined after a very close shoot-off. Reo Wilde took on his Team Hoyt teammate, Jesse Broadwater, in a very closely contested shoot-off that took 15 arrows to decide. Both archers put on a show for the crowd, and Wilde walked away victorious. Wilde and Broadwater also shoot the Pro Comp Elite as their bow of choice.

In the car shoot-off, archers begin at a distance of 20 yards and move on only if they hit a perfect bulls-eye. For every perfect shot, the group moves back 5 yards until there is only one archer left standing, and they get to drive away in a brand new Ford Mustang! Team Hoyt pro, and 3D Superstar Sam Wolthuis made it back to 50 yards and walked with the keys!

Congrats to Team Hoyt shooters for all of their continued success in this year’s NFAA 3-Star Tour. For more information on how you can get your hands on the best shooting bows in the world, visit Hoyt.com and your local Authorized Hoyt Dealer!

Get Serious. Get Hoyt.
Bows of Champions.