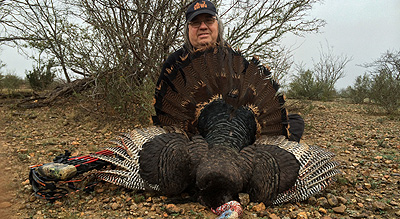 After we dropped Fred off, George drove to an area I hadn’t seen yet to see if I wanted to hunt there. He stopped at the top of a hill and I took one look at the nice pond 300 yards away bordering a green field and a line of trees that definitely should have some roost trees. “This will do,” I told him. Sixty yards down hill, the dirt road we were stopped on dead ended on another road, making a turkey seeing 3-way intersection. We dropped off our turkey hunting gear and drove 300 yards further down the road and hid George’s truck in the brush and returned to the hunting site, set up my Double Bull blind and put me and my gear inside. 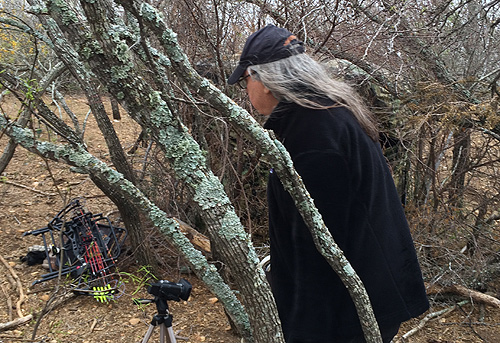 I told George where I wanted him to set out my Jake decoy, 8 paces from the blind. (On the earlier hunts I used a jake and hen decoy but this time I went with just the jake.)

During the next two hours it rained a couple of times. George and I waited patiently, me with the bow at ready and him behind the video camera and tripod. I called every 20 minutes. We saw a big wild hog come out of the woods and drink from the distant pond. CLUCK! I made 4 yelps. “There’s a gobbler to the right,” George whispered. “Standing on the other side of the road, looking toward the decoy.” I couldn’t see him until he walked further down the hill, hmmm, a nice longberd. He crossed the dirt road and stopped by the crossroad and watched my Dave Constantine decoy. At the dead end he turned left, good deal. I heard another yelp, this one to the right and up the hill  from us. The longbeard went to the far side of the crossroad and walked toward the decoy, stopping briefly a few times.

When he walked past the decoy and out of our sight George said, “Why didn’t you shoot?” The gobbler was 30 to 35 yards and that’s further than I want to shoot, so I told George that. He didn’t look that happy about it. Five minutes later I made a few yelps and waited to see if the other cluck was a gobbler too. It was, I saw him 50 yards to the right on this side of the crossroad. I signaled George and he turned on the video camera.  (George is videoing for an upcoming wild turkey hunting show for Camo Clan TV.)

The other gobbler had been jittery, he kept distance between himself and the jake decoy. Dave Constantine’s effective posturing of his decoy had its guard up. But this gobbler was confident, sure of himself. He paused momentarily behind the decoy, standing as tall as possible. I couldn’t help but notice his long spurs (they turned out to be 1 1/2 inches long and very sharp). 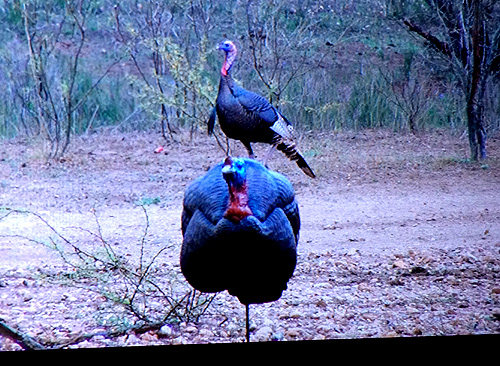 He sucked his snoodle into an erect lump behind his beak and started walking toward the decoy. I held my bow low so it was below the wall of the blind … and drew it back to full draw. I glanced up, the gobbler was almost to the decoy. I raised my Bear bow into place. Took aim with the bright green fiber optic pin on my bowsight. 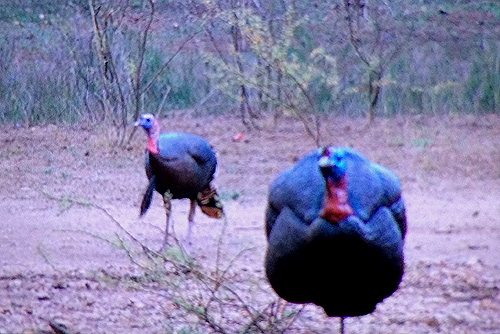 I touched the trigger on my Fletch Hook release and the arrow hit with a crack. The hit looked perfect. In an instant he was gone, half running, half flying across the road and into the woods to our right. We heard him go down. We waited a few minutes and eased out of the blind to look for the gobbler. There was a good blood trail and we followed it right to him. 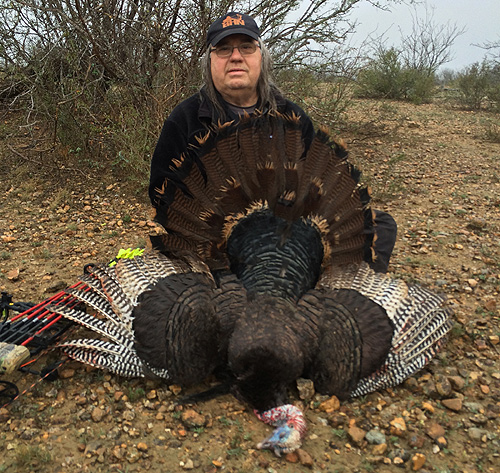 I sat down in the rocks and pebbles and fanned the gobbler out and George videoed my comments and took pics with my iPhone. My bowhunt at Brushy Hill Ranch was complete. And it was a good one.

BROADHEAD: The Dead Ringer Trauma did it to this mature gobbler. My arrow flew perfectly. This broadhead can be set for a 2 1/2″ or 3 1/8″ inch cut. If that sounds like a wide cut you should have seen the size of the gaping cut that put the gobbler on the ground at once.

My 2013 Empire from Bear Archery bow has a Shadow finish that’s perfect for ground blind hunts. The Empire is one of the smoothest bows I’ve ever shot. It is very quiet as well.  It has impressive speed and hitting power.

The Empire’s arrow rest is a Trophy Ridge Revolution. It incorporates the two new technologies that changed recent archery, it is both a Full Containment rest and a Drop Away rest. It shoots QUIET … and accurate. The bowsight is a Trophy Ridge Cypher 3. It’s made from a Ballistix CoPolymer and is as strong as aluminum but 25% lighter. It Tool-less Windage and Elevation Adjustments. It’s easy to adjust and tune. I used my favorite peepsight, the Whisper Peep with tubing. The Beacon bowquiver from Trophy Ridge has a unique feature I really appreciate. The quiver’s hood has 3 powerful green LED lights encased in the top. So this quiver has been  a flashlight on the way to many a stand as well as a subtle green light inside my ground blinds.

ARROWS: I used the new Maxima RED carbon arrows from Carbon Express. Maxima® RED™ is the new, hi-tech carbon design with stiffer ends to contain the arrow’s flex to the “RED ZONE”™, the section of the arrow shaft engineered to contain Dynamic Spine. This design makes broadheads shoot more consistently. I fletched these arrows with bright yellow 2″ Omni Vanes and Goat Tuff glue. Both are top quality products made by Goat Tuff Products.

RELEASE AID: I used the Fletch Hook from Jim Fltecher Archery. This is a great release. It’s a loop only release with very smooth performance. The forward trigger helps gain back lost draw length from using a loop. The hook is specifically designed to release the loop cleanly resulting in a consistant, smooth shot every time. The trigger is adjustable from heavy to hair trigger.

The cut SILICONE WATER GUARD: I always it with me in case rain sets in, which it did. I got out my ATSKO Silicone Water Guard spray bottle and sprayed my hunting pants with it. This product is both waterproof and breathable. My pants stayed dry walking around in the rain and ground cover. I was comfortable because of the fit of the pants as well as the breathable factor.

ALPEN BINOCULARS: I used the Alpen Wings #599 Binoculars. They are small and light weight. With them I checked out the turkeys quickly. These binoculars are easy to hand hold. They’re good in low light in the morning and at the end of the day. Adjusting the Focus is quick and easy. They are a flat color that doesn’t shine and that is extra important when you hunt wild turkeys. Plus they are waterproof and fogproof which is a must have, especially on chilly, rainy days like we had on this hunt.