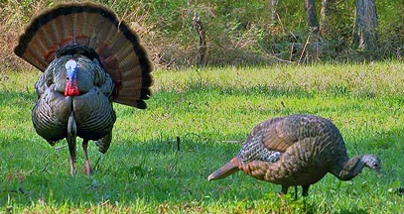 DECOYS: Now this is the fun part! I’ve used every decoy you can think of, period! Early years we had decoys made out of everything from paper and cloth silhouette, foam or plastic full body decoys, taxidermy hens and jakes, just to name just a few decoys I’ve used. Some of the best companies on the market today are Zink, David Smith, Carry Light, Primos, Flextone, Flambeau and Knight & Hale and they all work. But, sometimes nothing will work! Trust me on that. However, that being said, I will always use a decoy when bowhunting Gobblers.

My favorite decoys are the ZINK / AVIAN-X these decoys are so realistic it will scare you in the results; I’ve used these decoys for the past 2 years and let me tell you they will fool anyone or anything, people, Gobblers, Deer, Predators and even moo cows! My favorite ZINK / AVIAN spread are to use a feeding hen, a lookout hen and a Jake, Deadly! I’ve had Gobblers come to the decoys and crawl up on the back of the decoy and try to breed the hen decoy! I’ve had two (2) Gobblers to come to the decoy together, the dominate died from an arrow thru the boiler room, the second gobbler ran over and beat the crap out of the flopping, dying dominate Gobbler, then turned on the charm by strutting up to the decoy and crawling up on the back of the hen decoy and try to breed.

It was a shame as I did not have another open tag as that second Gobbler needed to tie and get his dumb butt out of the gene pool! Years ago I had a Coyote come running into my Carry Light decoy spread, snatch up my decoy and start running off with the Carry Light hen decoy in his jaws and only after going a few yards to realize the decoy was not right! I almost laughed myself to death, thinking that Coyote was duped really well.

Remember, today’s decoys are so realistic you must be careful where you hunt because some idiot will shoot your decoys thinking it’s a real Gobbler? I do not use decoys on public land. If you do use decoys on public land be sure to put some florescence orange around the body of the decoy, that may help you. By the way Gobblers will not spook from the florescent orange.

The other point I would like to bring to your attention if you’re bowhunting, I always try to set my decoys about 20 from me and the hen decoy facing away from me as most of the time the Gobbler will approach the hen from the rear. If you’re using a Gobbler or a Jake decoy, the Gobbler will typically approach those decoys head on to assert his dominance. These set ups will give you an excellent quartering away shot. More to come in the coming weeks on hunting Gobblers with a bow and arrow.

More Turkey hunting tips, stories and equipment suggestions that you will find necessary for your success when bow or gun hunting for Gobblers coming.