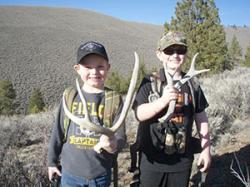 Kellen Tanner (left) and Konnar Hancock with some sheds they picked up at last weekend's 2014 Group Shed Hunt with the Oregon Shed Hunters, a group that promotes ethical shed hunting.

The hunt is on…for shed antlers, that is.

This time of year, many Oregonians head outdoors to look for the antlers that have been shed by the state’s male deer and elk. Deer usually shed theirs from late December through March, and elk from late February through early April.

But this time period is also a critical one for big game, when animals are at their most vulnerable because there is less food available. Shed hunters using motor vehicles can put wildlife on the move when these animals need to be conserving energy. Even people on foot or horseback can disturb animals. For this reason, some parts of the state known to serve as winter range for big game are closed or have motor vehicle restrictions in late winter and early spring.

Sgt. Randy Hand, Oregon State Police, Klamath Falls says road closure violations can be a problem this time of year. “In the past, we have had folks off-roading in winter range in their quest to find antlers,” said Sgt. Hand. “Protecting winter range is a high priority this time of year and we are looking for violators.”

Shed hunters can take the following steps to protect big game while enjoying their sport:Don’t disturb big game animals: Don’t approach animals or follow the same ones on a daily basis.Respect road and area closures. These are in place to protect winter range and wintering big game. (More information on specific closures below.)

Don’t take vehicles off-roading. The ground is water-logged at this time of year and off-roading in the wrong place can damage critical wildlife and fish habitat. Travel by foot or horseback instead.

Don’t be in the same spot every day. Deer and elk might need to be in that spot for food or cover, and your presence will keep them from it.Keep dogs under your control.

All about antlers
Antlers are the fastest-growing bone that isn’t cancerous or prenatal. Antlers on deer can grow at a rate up to seven times that of skeletal growth. Elk antlers can weigh 30-40 pounds.

Elk antlers begin re-growing soon after they are shed, with most growth happening in spring and summer months. The antlers are covered by “velvet” throughout this growth period, before hardening to bone in late July-early August for elk and late August-early September for deer. This makes antlers ready in time for breeding season (in September for elk and November for deer), when male deer or elk will fight for dominance using their antlers.

People who collect shed antlers are allowed to sell or exchange them, but certain rules apply. Only naturally shed antlers, antlers detached from the skull, or a skull split apart can be sold or exchanged.

Past poaching problems led to the regulations. Skulls that are split have less value and are not eligible for record books. These regulations reduce the incentive for someone to kill animals on winter range or out of season, hide the skull, and go back months later and “find it”. A Hide/Antler Dealer permit ($17) is needed to purchase antlers for use in the manufacture of handcrafted items.