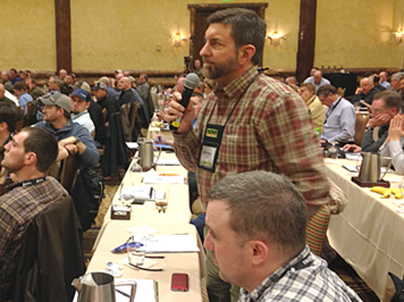 The goal of the summit was to identify key challenges to the future of whitetail deer and whitetail deer hunting, and to begin addressing them with cooperative action, within the context of the North American Model of Wildlife Conservation. The Summit included two and a half days of interactive general and breakout sessions, lunch and evening presentations, and an official press conference at the conclusion. Presentations focused on a variety of issues ranging from historical perspective, the importance of whitetails and whitetail hunting to our culture, game management strategies, diseases, the game farming industry, to urban deer management and political influences.

“Whitetail numbers are down throughout much of their range due to many factors including EHD, predators, and even over-harvest,” said QDMA CEO and wildlife biologist Brian Murphy. “In some areas, herds are below what the habitat can support and what provides a quality hunting experience. This is a serious issue with significant long-term implications for the future of deer hunting.” 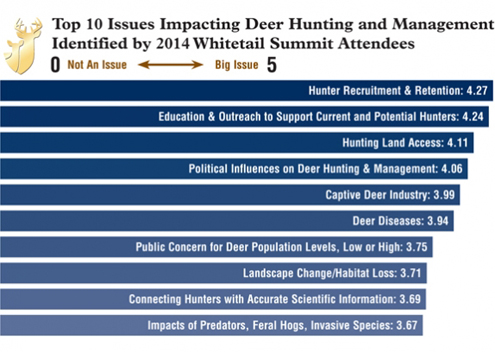 “Whitetail deer are the most hunted and economically important big game species in North America and the backbone of the North America’s bowhunting culture. Whitetails are pursued by more bowhunters than any other species, although the hunting pursuit of whitetail deer is at a crossroads. Many decades of increasing populations and expanding range has recently transitioned into changing societal attitudes towards deer and changing game management practices,” said Executive Secretary of the Pope and Young Club, Kevin Hisey. “Current issues impacting the ‘state’ of whitetail deer, and our hunting heritage, include evolving management strategies, over-population in some areas of the country, dramatically reduced deer densities in other areas, impacts of extreme weather, diseases, predation, an increasing game farming/breeding industry, genetic manipulation and outside political influences. Overriding these topics are issues of hunter access, hunter recruitment and retention, and protecting the core foundations, ethics and traditions of our hunting culture. We are pleased to be involved with QDMA and others in addressing these issues. The Summit resulted in excellent discussions and realistic action items. We look forward to being engaged in the outcomes and work to come.” 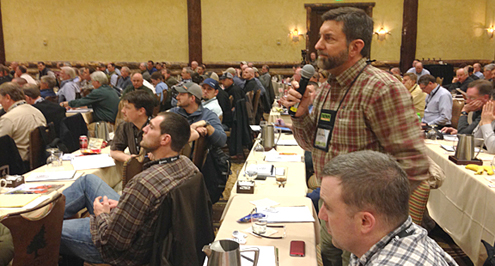 Hunter numbers, hunter knowledge and hunting land.
After more than 20 separate issues threatening the future of deer hunting had been identified during an open-mic discussion, these three floated to the top as a common theme. Deer hunter numbers need to be sustained, they need information that can help them be more informed and stay connected to hunting, and they need a place to go afield. While these issues are nothing new, it’s clear they remain foremost in everyone’s minds when discussing the future of our deer-hunting tradition.

What can bowhunters do to help?
We are glad you asked! First and foremost, GET INVOLVED! Joining clubs like The Pope & Young Club, species specific organizations and your state and local bowhunting clubs provide bowhunters with an effective voice. Non-Governmental Organizations (NGO’s) raise funds for wildlife, provide relevant information, education and raise awareness of the issues.

“Becoming a member of multiple organizations is the first step to help fight for your bowhunting heritage.”

Learn all you can about bowhunting’s history, its heritage and the species you hunt. Learn why the science is on the side of the hunter and how the North American Wildlife Conservation Model is the most successful wildlife management system on earth!

http://www.rmef.org/Conservation/HuntingIsConservation/NorthAmericanWildlifeConservationModel.aspx
Collectively, sportsmen are a powerful group. 16.4 million people bought a hunting license over the last 5 years and $18 billion is spent annually by deer hunters alone. Bringing numbers that large to the table make politicians take note. So, stay aware of the political issues and how they effect your rights as a bowhunter and don’t forget to VOTE!

Here area few links to organizations that can help keep you informed about the current political and conservation issues and ongoing species-specific efforts.