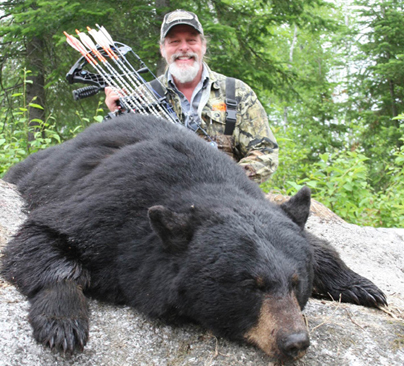 Excuse me whilst I genuflect at the altar of ThermaCell, the wonderful godsend of bug deterrent extraordinaire, without which Canadian bear hunting would seem impossible without getting eaten alive by vicious bloodthirsty airborne varmints of the sting/bite/buzz kind. Thank you ThermaCell. No, really; thank you very much for allowing me to pursue my rugsteak dreams. Godbless you.

No kidding. I admit there were years long ago in the time of pre-ThermaCell that we enjoyed the unique hunting adventure that is bear hunting. However, those otherwise joyous memories are seriously tainted with the obnoxious drone of relentless buzzing, dodging, swatting, blinking, scratching and nasty stinky spraying that I’m sure alerted many a bruin to our ambush location as we desperately flailed to save our hides from the torrent of mosquitos, gnats, blackflies and pesky no-seeums that plagued our wilderness stand time.

I for one did not enjoy it one bit, and thank the good Lord above for the creative minds of American entrepreneurs who came up with this clever device to bring sanity and comfort to the bug hell of the bear woods.

And this late June hunt outside Val D’Orr QB with my wonderful son Toby, Jack Tippman and a wilderness camp full of hardcore bear slayers was absolutely spectacular on all counts, with much credit going to ThermaCell for making it all bug free.

Our Sunrize Safaris guiding and outfitting booking agency had 12 hunters booked for the early season, and they killed 10 dandy black bears. That’s a damn good success rate anywhere you may hunt, and quite honestly Toby didn’t kill one mostly due to the fact that he never slowed down taking care of our hunters, thereby detracting substantially from his own killing opportunities. Nobody works harder than my son Toby at maximizing the perfection of our hunts. Thank you son. I love you.

Still licking my heartbreak wounds from being forced to leave worldclass New Brunswick bear camp with Danny and Chris Dyer a few weeks earlier due to a nasty case of Bronchitis that ruined wife Shemane’s and my chances there, I was salivating in anticipation for a pretty arrow on a spring rug in the worst/best way.

Four of the eight hunters in camp had killed fine bears, but sightings were diminishing late in the season. The giant fullmoon overhead was not a bear hunter’s friend this week, but when in doubt, we whip it out and never giveup.

Toby ran the SpiritWild vidcam our 1st night out, and though the mighty spirit of the bear permeated our woodland setting, no bears were sighted.

With me on camera duties and Toby manning his new Mathews Creed bow, we got skunked on night number two as well.

Bear camp is special and always fun. We really enjoy the company of fellow sporters from around the world, and with great food and great hunting stories shared by all, we were having as good a time as one could ever hope for. But no bears.

It looked like we could hunt only one more night, so decided to split up and self-video our hunts to double our chances for a kill. Such one man maneuvers as hunter and cameraman combined is no easy task, but it can be done, and in fact, many of our best Spirit of the Wild shows on Outdoor Channel have been the result of self-videoing, so we know we can pull it off.

The bear woods have a taste and flavor all their own. Way up here in wild Quebec is as wild as it gets, and my small clearing deep in the wilderness sure felt like “bear” to me.

With the vidcam on a sturdy arm, I was able to film varying hares, red squirrels, ravens, the stunning forests all around me and one very happy guitar playing bowhunter who seriously craves every sacred moment afield. Now all we need is a bear.

In the still of the night, after two hours at 8pm, in waddled a trio of this year’s little bear cubs. For a full hour I filmed the little buggers doing all those ridiculously cute bear cub things they do, surprised that no mama bear showed up. With the bear rut in full swing, it is not out of the ordinary for sows to be run around by rutting boars.

When she finally peeked her head around the corner, she looked straight up at me and simply turned around and took her cubs with her.

I remained predator poised and ready to rock.

At 9:15 another nice sized bear strolled in from the right near the bait, but this one also looked up at me in the stand that had been there for more than 25 years, and he too turned and walked off.

At 9:30 I was surprised to see a big bear just feet off my right shoulder as it ambled to the base of my stand and looked square into my eyes. I didn’t move a muscle.

As this bear skulked off behind me, I silently stood up and prepared for a shot, even though it would be impossible to maneuver the camera around to capture the kill on video.

Fifteen minutes later, in the fading overcast light, another good bear emerged from the jungle near the bait. I immediately pushed the record button but could tell the image on the screen, at least from the angle I could see it, didn’t show a very clear view of the bear. Nonetheless, when this beauty turned broadside at 20 yards, I drew back my new Mathews Monster Chill, and the 45 pound force sent my 400 grain Nuge GoldTip zebra arrow dead center into the Ursus pumpstation.

The razorsharp Muzzy slammed in and out in an instant perfectly in the crease midship behind its foreleg, the glowing Lumenok leaving no question of shot placement, and with a single 10 foot leap, the bear crumpled and moaned for the fastest bowkill I think I’ve ever witnessed. Four seconds max!

Hallelujah! All that nonstop year round practice always pays off and I had my 1st black bear for 2013 dead right in front of me.

Toby and Jack helped me drag out my magnificent beast and much celebration ensued over steaks and chow back at camp. We filmed a respectful tribute to the mighty bear, Canada and the Tippman camp, took many photos and rejoiced the good old days of American bear hunting right here and now.

What’s Happening to Our Whitetails?