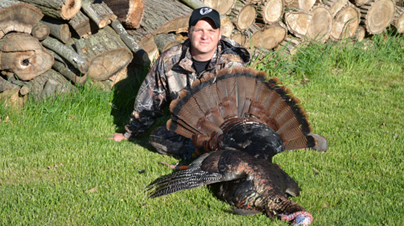 The old tom came in silent, and neither of us made a sound until I coaxed one obligatory gobble out of him. That was the last sound that bird ever made. I didn’t want the season to pass without hearing at least one sweet call of spring.

Turkeys can be hunted like deer- in fact, all game animals have the same basic needs – food, water and shelter. And of course, the hunter’s “ace in the hole”, the animal’s desire to breed. I like to pattern my turkeys, and simply get between point A and point B at the appropriate time to kill one as he walks by. If that doesn’t work, then I’m decoying, and calling and running all over trying to punch my tag.

Scouting
When scouting, I first look for a roosting area. In my neck of the woods, birds tend to roost high in steady old oaks or seek shelter from the weather in mature pines. Turkeys also like to roost off hills, allowing them to get safely high in a tree with little effort. The terrain I hunt is relatively flat, so anytime a bird has a chance to roost off of a hill he usually takes advantage of it. The best way to confirm the location of a roost area is to sit and listen from a distance, in the wee early morning hours or at dusk. During both of these times, toms will usually gobble. If time won’t allow for an observation, suspicion of a roosting area can be confirmed by locating piles of droppings, feathers, and scratch marks in the leaves. I’ve noticed that the birds tend to fly down into the wind, and certainly away from the sun. Generally, the turkeys will leave the roost and then head off to who knows where, leaving a trail of scratch marks behind. The scratches will indicate the direction where the birds traveled, with the pile of leaves being pushed behind them as they walk away.

Preparation
Like a child on Christmas Eve, the night before the turkey opener is a close 2nd to the evening before archery deer season begins. I have so much fun preparing for the season that is has become a early spring ritual for me. I’m really excited this year to use my Thunder Chicken vest from ScentBlocker. This is by far the sweetest turkey hunting vest I’ve seen yet. Designed in part by The Bone Collector himself, Michael Waddell, this vest has everything a serious turkey hunter could ever need. I really appreciate its plentiful pockets placed logically through the vest, its Realtree Xtra revolutionary camo pattern, the orange safety flap on the back, and most of all, the quiet, magnetic comfortable pad that folds down from the back.

Along with my vest and some good rubber boots, I wear my fall hunting gear in the spring as well. Even though we don’t need to worry about human odor when we turkey hunt, I appreciate how comfortable and dry my RainBlocker clothing is. With the newest camo patterns like Realtree Xtra and Mossy Oak Breakup Infinity, those old toms will never know what hit them!

I start each preseason ritual by taking everything out of my vest and re-assessing its value. A turkey hunter can never have too many calls, but there are a few things each year that don’t get invited back in the vest for the following spring. I also recycle old water bottles, thrown away all the junk I’ve collected, chalk up my box calls, sand my pot-n-peg calls, and get rid of my old diaphragm calls. I’ll of course invest in a few new diaphragm calls, and throw in some fresh granola bars and a couple of water bottle as well.

Even thought my turkey gun is tried and true, I re-sight in each spring. Not only for the confidence and practice, but I feel it is important to retrain the muscle memory of slowly raising a gun and squeezing the trigger.

Hunting
Once I’ve located a roost area, and have a rough idea of where the birds will head next, I try to find a decent place along the way to setup. I like to get against a big tree, in a thick pile of brush, or in some cases, set a pop-up blind. When bowhunting turkeys, a pop-up or permanent blind is almost essential. A turkey will almost always pick up on a bow hunter trying to draw on him, unless his movements are concealed in some sort of blind. The setup needs to be easy to access, without a lot of noise, and the hunter needs to be in it really early. I don’t call much at this point, or use decoys. I simply rely on my scouting to put birds in front of me. If my intel didn’t may off, then it’s time for plan B.

After a few hours I’ll either have a dead bird in my truck or have moved to another location. I like to move to a strut zone. A strut zone is where a lonely tom will usually be found mid morning, showing off in the bright sun, looking for a hen. Usually strut zones are open fields, river bottoms, ridge tops, or anywhere the bird can be seen, and see, from a distance. A strut zone is a good place to use a decoy, making sure to face it toward the hunter. When bow hunting a strut zone, remember to get a blind in place ahead of time, just in case. If the strut zone didn’t produce a tom, the day’s not over. I then go to plan C.

I spend the rest of the day, moving from farm to farm hitting every strut zone I’m aware of until I’ve killed a bird. If I don’t kill one, I at least have a good idea where to start the next morning. If hunting different properties isn’t an option, take a break and head back out with different calls. Try a new location such as a water hole or dust bowl, and be patient. The turkeys are out there someplace! Eventually they’ll come back. It is important to note, when considering an all day turkey hunting marathon, be sure to check the state hunting regulations because not all states allow for afternoon or evening turkey hunting.

With a little preseason scouting and homework, anyone from rookie to veteran’s odds of killing that wise old spring longbeard will increase. And if you are a rookie, let us be the first to welcome you to your newest addiction! Learn a few basic calls such as a cluck, yelp, cutt, purr, get a good shooting gun, a few decent decoys, and some nice camouflage and hit the woods! Have fun, be safe and be sure to take good pictures to share with us!

Happy Easter from In Sights Nutrition