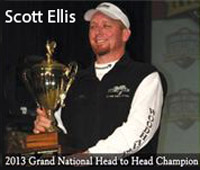 I don’t consider myself a competition level turkey caller, fact is I fall far short of that. And saying that, if you’ve hung around Bowhunting.net during the last 14 years of my blogging my wild turkey hunts, you may have noticed that I’ve managed to call in and put my turkey tags on plenty of wild turkey gobblers. And even racked up 9 Wild Turkey Grand Slams, all with the bow and arrow. But, I realize that it was because of patience, perseverance and better than average opportunity to hunt … and not my turkey calling skill.

Every year I go to the NWTF (National Wild Turkey Federation) Convention in February. I really enjoy the Sport Show but my favorite thing there is the Turkey Calling Competition. It’s a given me the opportunity to hear the world’s best competition turkey callers. It’s so cool. Today I’m gonna introduce you to a caller that I think is one of the best around, Scott Ellis.

Scott Ellis was 10 and had hunted for 5 years when Glen Wilson gave him a mouth calling lesson and took him on a Fall turkey hunt that changed his life. Afterward, Scott learned to call all types of game but the wild turkey’s was his favorite. He was intrigued by its extensive vocabulary and the challenge of the variety of turkey calls available.

Scott became intensely interested in calling wild turkeys and through listening to them and constant practicing he improved. He attended his first  competitive turkey calling contest when he was 17. That ws 1992 and Scott finished 2nd in the Florida State Seniors division.  Since then Scott has accumulated over 20 Florida State turkey calling titles and won over 50 Open, Friction, Owl and gobbling divisions in 12 different states, Including a top 5 in the 2010 and 2014 Grand Nationals and top tens in 2009 and 2011. His 1st Grand National 1st-Place win was the Head to Head competition in 2013. Go to the List of Titles won by Scott Ellis.

Scott Ellis’s passion and knowledge of calling and hunting wild turkey led to another passion, helping others learn about turkey calling and how to hunt gobblers. Hundreds of turkey hunters, new and experienced, have learned from Scott’s considerable experience through his expert advice.

Things like, “I always say a gobbler has five minutes every year that he will succumb to a call, you’re looking for the right five minutes.” And “A question I am always asked is, If I’m working a gobbler and he shuts up, how long should I wait? My answer is 30 minutes longer than whatever you feel was a long enough wait. Patience harvests more wild turkey gobblers than any other factor.”

Like I mentioned earlier, I am not a great turkey caller; frankly, I’ve probably taken the yelp, cutting and occasional poorly controlled cluck on a mouth call about as far as those three vocalizations can take a turkey hunter. But Scott Ellis is a great turkey caller. He can do the Purr, Kee Kee, Tree Calls, Fly downs, the Whine and every other sound a wild turkey hen and gobbler can do.

And Scott has a DVD that absolutely blew my turkey calling mind. It’s called “Mouth Call Magic.” If you’re interested in hunting wild turkeys, even if you are good at it, Scott Ellis’s “Mouth Call Magic” will help you call right. Call better. It’ll give you the vocalization tools to call in and bag more gobblers. As well as, the perk of watching your hunting buddies jaws drop when they hear you call. 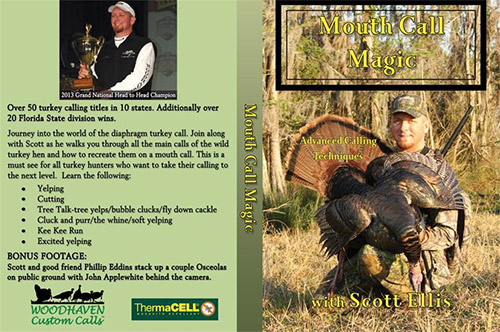 Numerous television shows have aired episodes with Scott Ellis, Including Turkey Call, Outdoor Allstars, Get in the Game, Hardcore Hunting, and Woodhaven Pure Turkey. Scott has also involved in the the outdoor writing arena.  He’s been published in Florida Sportsman, Florida Game and Fish, Turkey and Turkey Hunting, Realtree.com, Woods and Water, Bowhunting.net and is a contributing writer for UShuntingtoday.com.

Visit Scott Ellis on the web at www.scottellis-eliteturkeyhuntingandcalling.com.

I Owe my Father… and the Repairman…