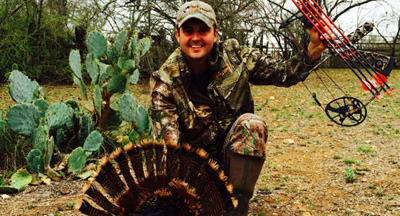 We all woke up early and drank some stout perked coffee and went to our hunting areas. George and I hunted the same ground blind we were in yesterday afternoon. Yesterday we did not hear any gobbles at “gobble up” time.  However, this morning was nuts. They were gobbling strong in every direction.

Just after 8:00 AM we saw 4 hens and a big gobbler walk into view 50 yards to our left. They fussed around and then walked down hill and disappeared. 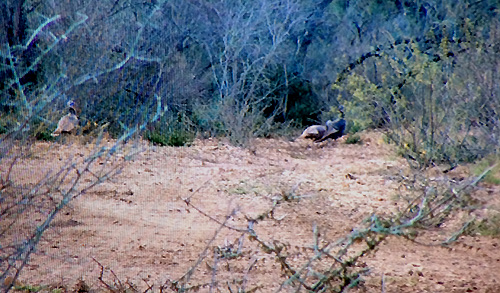 Twenty minutes later 20 hens walked into view exactly where the previous hens were. I counted 20 of them. A big Struttter in the brush behind the hens caught my attention. Two more were with him. I called at the Strutter and he blew up full blown and turned his big round fan towards us. 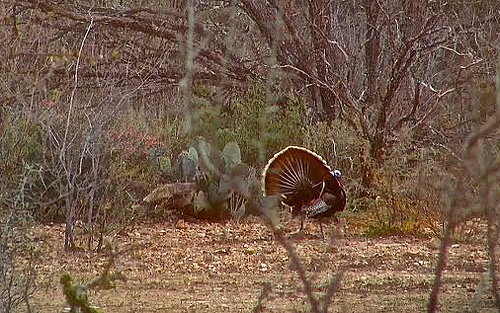 The hens pealed off down the hill and the other two gobblers followed. The Strutter dropped his fan and and went after the 20 hens.

That was the morning action where George and I were hunting. Meanwhile Paul Fields heard gobblers on the roost and after they flew down. But he didn’t see any close enough to shoot. Ditto with Fred.

Before we returned to camp George and I moved my Double Bull ground blind down the hill where the hens and gobblers had gone. Then we picked up Fred and showed him where the turkeys had gone this morning and came up with a spot 250 yards from my blind.

Then we all drove into Sabinal and ate lunch at a small place named Grandpa Rudy’s Pit BBQ. The food was good.

When we got back at camp Paul Fields studied the map of the area he was hunting. The majority of the gobbling he was hearing in the morning was from a winding, dry creek bed. He located a place where he could put his blind and when he went out for the afternoon hunt he set up at this place.

George and I and Fred went to our new places early and waited for wild turkey visits during the afternoon. We got thunderstorms instead.

Meanwhile Paul Fields hung tight at his creek bottom site. He saw a couple of gobblers and a hen during the afternoon. Then a big Longbeard gobbled its way into view. Paul drew and took aim. His arrow knocked the gobbler off its feet and it rebounded and flew into the short scrub trees to the west.

Paul waited half an hour and went to check things out. He found his arrow … and then gobbler, a big longbeard with 1 1/4 inch spurs. I took his picture in the rain. Paul used his new Mathew’s Creed and the Dead Ringer 2-Blade Trauma broadhead to take down this mature gobbler. 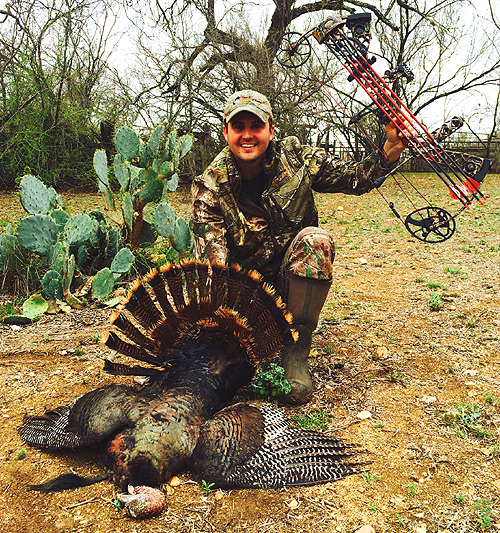 That night we drove to Uvalde and ate at another swell Mexican dinner at  El Herradero de Jalisco. Paul projected his video footage of this hunt and he made an excellent shot and the gobbler went down fast.

On my iPhone, Weather.com predicted a 30% chance of rain in the morning. In a dry area like this that means there is very little chance it will actually be any precipitation. But we’ll see what happens.

They Call Him “Black Death”.