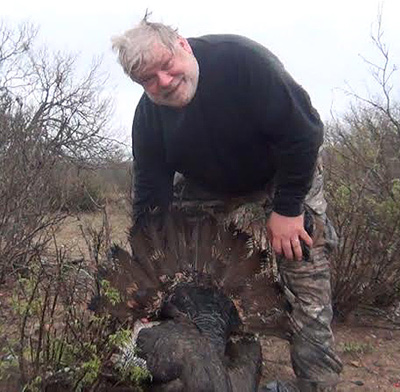 George Winters drove us around so Fred could check a couple of the areas that they picked out as possible hunt areas. When we passed two big longbeards walking along a dry creek bed down hill from the area Fred was interested in. We went there straight away and Fred set up his decoys and ground blind. 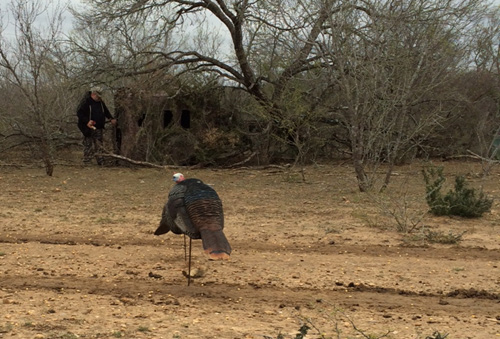 In minutes Fred was set up, had his chair, turkey calls, backpack and other gear inside the blind. Here he is getting inside his blind for the afternoon turkey hunt. 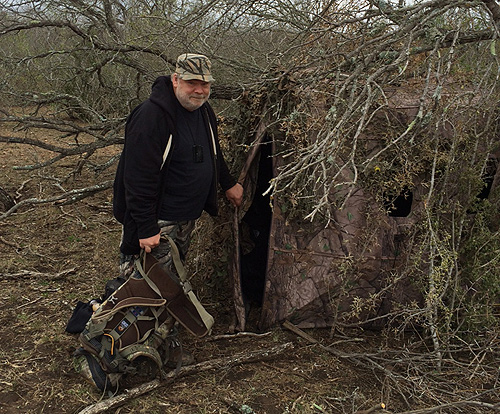 Then George and I drove to another part of the ranch to check out a place that George thought I might like … but that’s a story we will return to after Fred’s hunt report is done.

On his first outing Fred hunted a crossroads so he could see a long way. Mid day he saw 2 Tom longbeards cross the ranch road to the west. Later in the afternoon he heard lots of roost gobbles. He returned to the same place in the morning of the second day and heard lots of roost gobbles and his wild turkey sightings were once again when they crossed the road to the west.

On this hunt Fred got in the blind and waited. Fred called every half hour with soft calls on both his mouth call and slate call. After two hours Fred heard half a gobble to his right and peaked out of the blind’s window and saw 2 gobblers 75 yards away walking briskly toward Fred’s Jake and Hen decoys.

Fred drew his bow back and took aim at the second gobbler and shot him. The arrow hit good and both turkeys flew. But in 50 yards Fred’s gobbler folded up and dropped to the ground with a loud thump.

Fred called me and told us he had a gobbler down. Soon it started raining again and in an hour George and I drove up. it was raining when the gobbler was recovered. 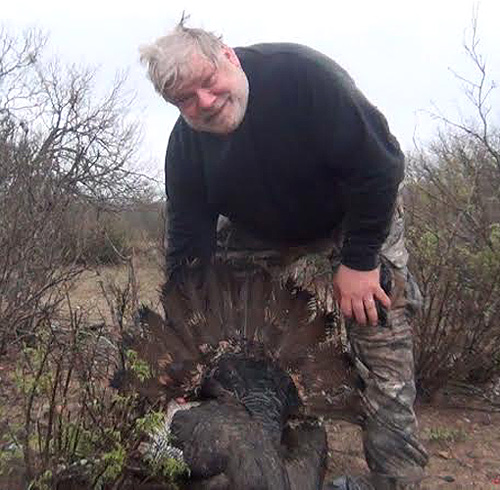