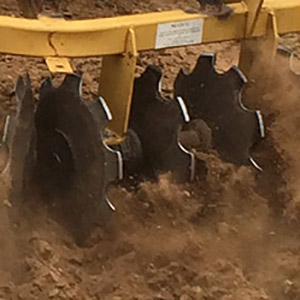 This weekend’s weather report had rain in our forecast so Collin Cottrell and I got organized Friday afternoon to begin putting in our first Spring food plots. In past years some friends have came to the rescue with their Kubota or John Deere tractors as well as plows, disks and sometimes even a seed drill. But last Spring I couldn’t find anyone to do it, everyone was too busy.

However, last Fall Collin noticed an ATV disk plow on Craig’s List and we checked it out and bought it. We put in 4 plots with that disk plow. But it was not quite smooth sailing, we had to buy 2 replacement traveling wheels and get welding repairs done  in a few places to keep the disk parts operating. We used Billy Don’s Kubota Mule to put in two plots and Collin’s pickup handled the job on the other two.

On last Saturday morning Collin showed up with a trailer for us to use for transporting the disk plow. The trailer is a real help, the lease road is rutted, rocky and just plain rough and it beat the wheels and weights off the plow a few times last Fall. But we’re getting some food plotting going now.

We began at the site Collin hunted last fall and saw a Big Boy buck several times. that was in route to his bedding area You can see in the picture below, in the bottom right, Collin has a game camera up at this spot and he used it to find the trails where the buck was  coming through the area last Fall. Lately it’s been taking pictures of wild turkey gobblers. 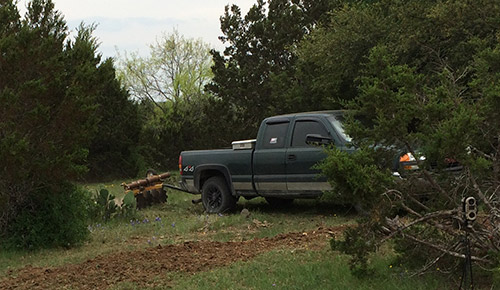 It’s back and forth, in and out, figure 8’s and zig zagging through the trees and brush to disk the ground up to our liking. 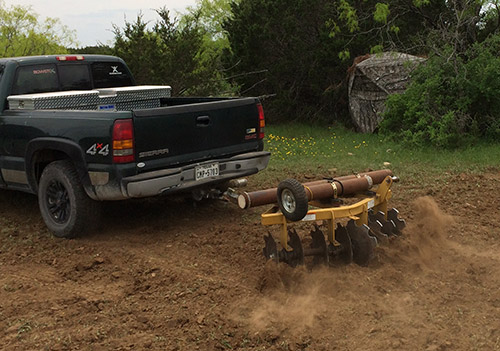 Our rag tag disk plow is digging up the top soil good enough. One wheel has already vibrated off but we need another set of wheels anyway. 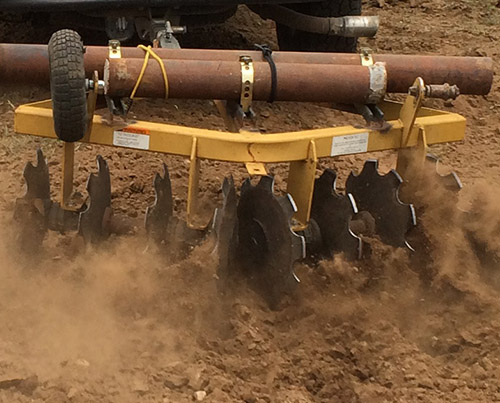 Looking pretty good now, the plot has an open space near the blind and also follows the trails close to the blind. 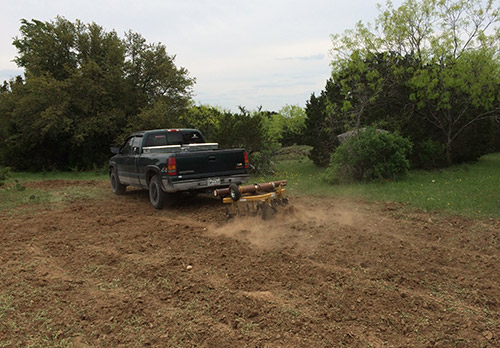 Collin got this seed mixed particularly for Texas, it’s a new seed mix called Texas Mega Plot and it’s from Evolved Harvest. It’s a clover and grain based mix of seeds that grow well in hot and dry areas (like Texas). 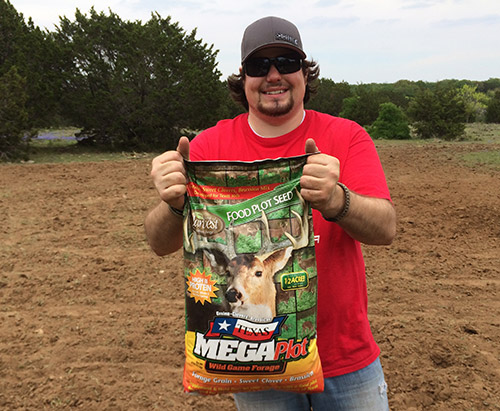 It has sweet clovers and a mix of brassicas that was developed for hot, dry areas in Texas, and that would be where we are. 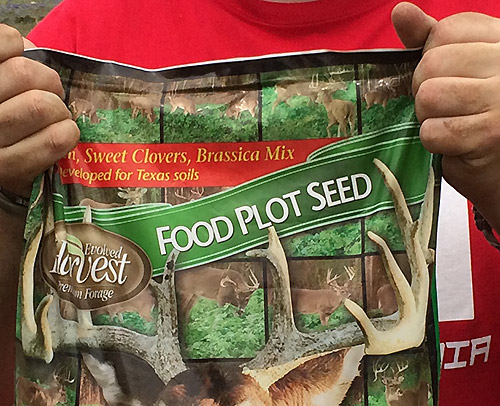 Then Collin loaded up one of our broadcast gizmos and quickly broadcast the seed, nice and evenly, around the food plot. 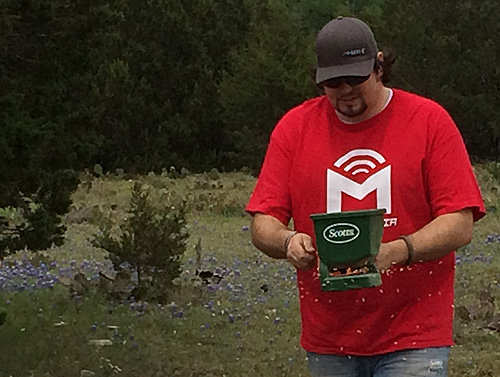 Over the years I’ve used several types and brands of broadcasters; ones that roll around the ground, ones that hold an entire bag and several in between. Most of them I’ve used bind and hang up and are a nuisance to use. But this one from Scotts is a good one. It does not hang up and broadcasts the seed out very nicely. And it’s from Wal-Mart so it is readily accessible almost anywhere.