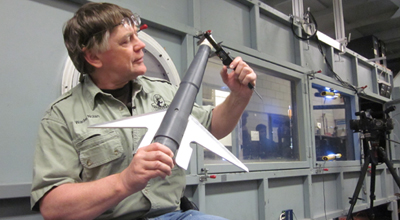 We took the Swhacker flight stability testing to a new level at major University. Working in the Aerospace lab we focused on the water channel where missiles and wing designs are tested. Could this testing tell us why some broadheads fly like field points and others like paper airplanes? Is this level of testing over the top for a broadhead? Or, are bowhunters looking for a broadhead that would pass missile flight criteria? How important is accurate?

The water channel tank is a circular design where the water is propelled at a known rate. Both water and air act the same when contacting a surface but because water is so dense it’s flow pattern is observable to the naked eye. Another benefit of water channel testing is that the pressures of the water’s force on a wing or fin is much easier to measure than that of air. Prior to this testing expedition I didn’t even know that a water channel is how ballistic missile designs are first tested and perfected.

There is another department at this university that is often used for classified testing. They are often contracted by missile manufacturers to conduct aerodynamic testing at supersonic wind speeds. We will move to the wind tunnel eventually, but first we must do baseline testing in the water channel.

In the wind tunnel, at Mach.7, the results are only observable with a high-speed camera and then only for a fraction of a second. Eyeballs tell the story in the water channel.

This is how it works. Motors within the water channel circulate the water at a known speed, then we introduce a UV-dye under a black light upstream of the test missile to observe the currents and disturbances made by the water as it flows over the test subject. 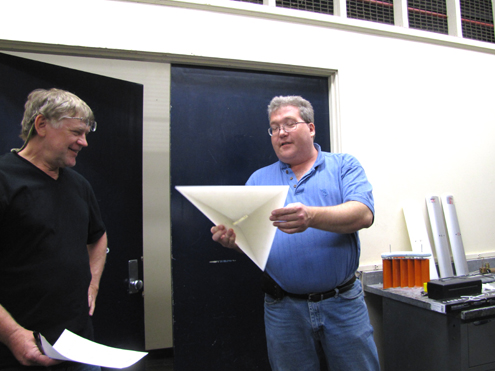 This is the delta wing design that our most sophisticated bombers rely on. Look at the vortex of dye above the wing. This demonstrates lift and stability. 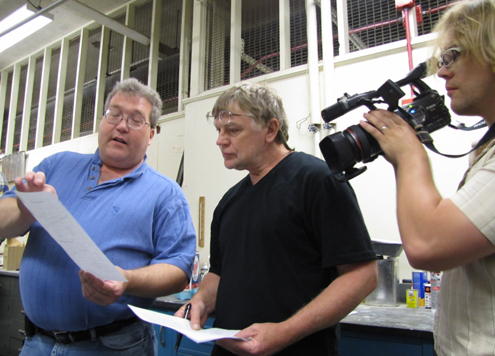 We attach micro sensors to the test apparatus to measure lift, drag and yaw. The sensors are managed via a computer program.

During testing, we tested a life-size Swhacker against another popular open on contact broadhead. Although the difference was small, it was measurable. Flight stability relates directly to the Science of Accuracy.

The aerospace professor suggested that the best results are gathered when you test a scale model….so we contracted that one be made by their prototyping department. Our model is 800% of life-size. We also had a model of a field point made so we could test the performance of the Swhacker against the field point.

This big Swhacker is a test prototype the size of military missiles. It will give us real results.

Next, we attached the Swhacker to the probes and sensors and exposed it to the moving water. Then we introduced the dye…Stable flight was the result. Not a big surprise considering a bowhunting rocket Scientist designed the Swhacker.

What does all of this science mean to you? It means we’ve done our homework. Swhacker offers accuracy you can see and rely on. The accuracy that we see in the aerospace testing lab is the same accuracy the Swhacker delivers in the whitetail woods.

Don’t forget to check out more Wade Nolan’s Whitetail University, or to learn more about SWHacker Broadheads and the products they offer – shop SWHacker on Amazon, visit swhacker.com online, or check our sister site, BowList.net, for more Points and Broadheads related links.