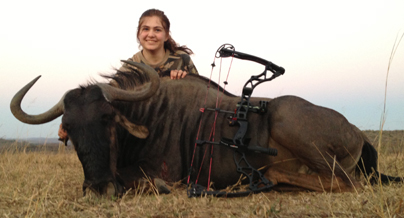 How often, while sitting around a campfire, does arrow penetration surface as a topic? I would say, sooner or later, during any hunting weekend, this subject is discussed. The hunters will each offer their opinion on what weight the arrow should or should not be, what broadhead gives the best penetration, how sharp the broadhead should be… and so on.

One bowhunter might say you need a heavy arrow to help you out when things go wrong, while another might say: “Yes, but it is precisely because of the heavy weight of the arrow that you run into trouble ¬– because a heavy arrow travels slower and can, thus, be more easily string jumped!” It is always interesting to hear the different arguments – and most of them are true, depending on the situation.

Well, I have been hunting with a traditional bow and a compound for many years now. I have rarely had any penetration problems with a 70-pound compound – whether it was my PSE Stingray, Firestorm or Firestorm Lite, my Alpine Avalanche, my Mathews Drenalin or Z7. Never when I hit where I aimed at. Most of the time, when shooting from a pit blind, my arrow will fly through a kudu and land more than a hundred yards further. It was only when I shot a quartering-away shot at a big animal and hit the leg and shoulder bones on the opposite side that the arrow did not clear the animal. I shoot a 460-grain arrow and I mostly use a Rocket Steelhead mechanical broadhead. Am I making a statement? Not at all – I am merely stating what had happened during my hunting escapades so far. I tend to be careful, shoot at short distances and wait for the animals to stand square on or only slightly quartering away.

Usually when I hunt with my traditional bow the arrow does not clear the animal. Only a few times in the past did my arrow fly right through a bigger animal such as a kudu or a blue wildebeest. One of these shots was with my 60-pound recurve, built by Gregg Coffey from Javaman Archery. I shot a big kudu bull using a carbon arrow tipped with a Big Five broadhead and the arrow zipped through the animal. Twice afterward did an arrow from my 50-pound Scythian clear a kudu bull.

A few weeks ago it happened again. This time I was hunting with my new takedown recurve built by my friend Johan Smit. I was hunting at Klipkrans Game Ranch farm in the Limpopo, South Africa.

While my daughter Anke was sitting in another blind, waiting to shoot her first blue wildebeest, I was waiting for an opportunity to see how this new bow would perform. At about 4:45 I received Anke’s SMS – she shot a huge blue wildebeest bull. A little later I received a SMS from the ranch owner, Johan Pont, saying the animal dropped within 40 yards. He was watching with binoculars from a distance.

About fifteen minutes later a group of blue wildebeest approached my blind. Since the blinds are made of reeds and are not very sound proof, I had to ready myself before they reached the feeding spot. I nocked an arrow in my recurve and waited for the animals to walk in and then to settle.

After only a few minutes a fair-sized blue wildebeest showed her flank. She was standing 15 yards square on. I picked a spot on the kill zone, drew the arrow back until my middle finger touched the corner of my mouth, focused on the spot and let my fingers relax. The arrow, tipped with a razor sharp Zwikey, flew true and hit the animal a little higher than I aimed. I saw the skin open and close – and then the animal ran off, while the arrow landed on the ground a few feet from where it struck the animal. It was a through and through.

All the blue wildebeest ran off in one direction and then stopped at 50 yards, looking back at the blind. Suddenly one of the wildebeest toppled over, tried to get up twice and then lay still. On later inspection we found it was a high double lung shot. We also saw that the arrow hit the rib right in the centre when entering and cut the rib on the opposite side when exiting. I had thus struck both ribs and the arrow still zipped right through.

Anke shot her blue wildebeest through the heart with her 35-pound Bowtech Heartbreaker, using a 480-grain arrow tipped with a German Kinetic Blue Flame fixed broadhead. Her arrow also penetrated the rib on impact and the arrow stopped against the opposite side, just under the skin. It was a heart-shot and the blue wildebeest weighed 135 kg when the head, innards and front legs were removed. The horns measured 26¼ inches.

My bow shot the 500-grain arrow at the animal at 185 feet per second. My blue wildebeest weighted only 89 kg and the horns measured only 18 ? inches.

I guess the only lesson we can learn from this is that when your arrow hits in the right spot you will rarely experience penetrations problems when hunting with a 60- to 70-pound compound, taking in consideration the penetration I get with my 55-pound recurve or Anke with her 35-pound Heartbreaker.