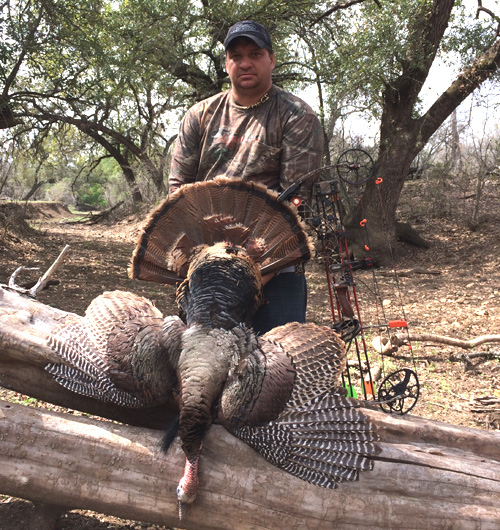 The last day of the hunt is here. Only two of us are hunting this morning, Tim Winters and Fred Lutger, who wants to bag another Rio Grande gobbler. Everyone got up in spite of the fact that most of us didn’t need to. We drank a little coffee and visited. George went with Fred to video and Brandon went with his dad, Tim, to video. When a shimmer of daylight showed on the horizon I could hear gobbles ring out from the winding dry creek bed that came by the lodge.

When the hunters came in from their morning hunt they had seen gobblers but no one brought one in. Since Uvaldle is 30 miles away Tim didn’t wanted to go to breakfast at Sabinol 4 miles from camp so he could get back in the woods asap.

In Sabinol we went to an old building with a sign that read  Grandpa Rudy’s BBQ. One glance into the cooking area behind the ordering counter and I could tell we were in for a home cooked breakfast. We loaded up on breakfast. Here’s a picture of my Hoevos Rancheros and flour tortillas. It was super good.

Below is a pic of Brandon Winters and me out side of Grandpa Rudy’s BBQ. 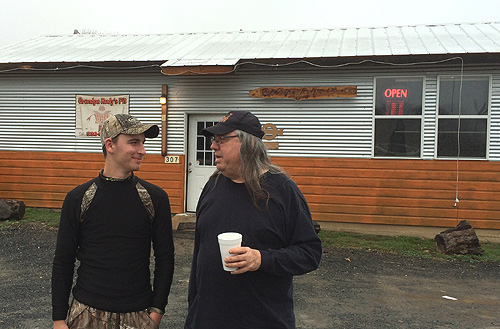 After breakfast Tim and Fred went out to hunt. Tim had been hunting different spots along a wide creek (normally dry but with a little standing water right now). He missed a shot two days ago but that wasn’t going to be the case today.

Late afternoon he heard a gobble after he called. Tim is hunting a “T” shaped ranch road crossing. The dirt road in front of him goes down and through the dry creek. Soon a big longbeard walked out of the brush to the left side of the road. But the gobbler was across the road and into the brush on the other side before Tim could get drawn.

Minutes later another longbeard came out a the same place. This time Tim noticed his red  head moving in the brush and was ready. He drew and when the longbeard was in the road Tim took his shot. The gobbler flew up and started straight down the road, but folded up and went down in sight.

Then a 3rd gobbler walked out. Tim and Brandon quickly switched the video camera and Brandon took his shot. But missed.

Tim used a Mathew’s Chill and Dead Ringer Trauma to bring his Rio Grande gobbler down. The sunset made fire in the sky as night time came slowly in. 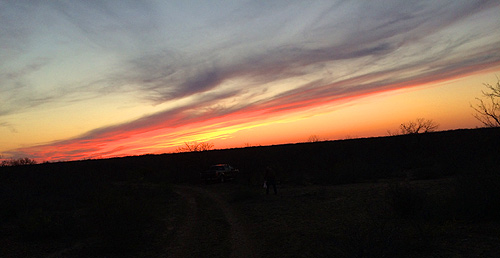 The next morning we gathered all our gear and our freezers with wild turkey breasts and meat and headed out. They went to Louisiana and Fred and I stopped in San Antonio where Fred had his airline flight booked.

The Brushy Hill Ranch was a good place to bowhunt. It is 13,000 acres of South Texas brush, cactus and creek bottoms, all fair chase. Besides wild turkey they have whitetail deer and wild hogs to bowhunt. We hunted on our own but they do offer guided hunts, particularly fort trophy bucks.

We had a good hunt with a swell bunch of guys. George and Tim have plenty of good video footage of the hunts, look for that soon on The Camo Clan TV. 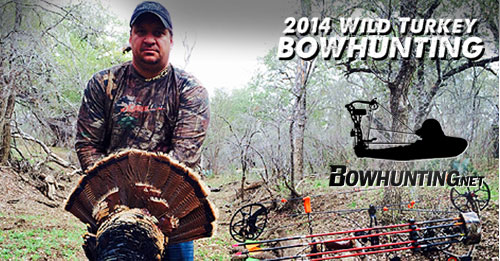