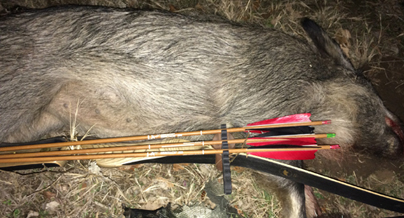 My dad started bowhunting in 1967. This was back when you could not pick up a magazine or anything as far as that goes to learn about the sport of bowhunting. While shooting a bow in Jr. High he simply fell in love with the flight of the arrow.

In those days the only name synonymous with archery he knew of was Fred Bear. Fred was born on March 5, 1902 and passed away on April 27, 1988. In my opinion there is no one who has done more for the sport of archery than the late Fred Bear. Fred was raised on a farm in Pennsylvania and then moved to Detroit. What got Fred into the sport was a hunting film he watched with Art Young. This movie captured Mr. Bear’s interest and when he finally met Art Young he was hooked on the great sport of archery.

Fred started bowhunting in 1929 with a bow carved out of an $8 Osage orange stave. It took him 6 years to take his first deer and after that the rest is history on his many successful endeavors.
During the great depression, Fred and a friend named Charles Piper put together $600. and started, Bear Products Company. The duo worked in printing and Fred started making bows for a few friends on the side in their shop. His name started getting out there as being a very good bowyer. After six years the bow business expanded to where Fred could actually make a living doing what he loved. This is when he started Bear Archery Company.

The last few months I have reflected back on those early years and felt like I wanted to shoot some Traditional Equipment to get back to the roots from where it all started. I thought there was no better place to start than with a Fred Bear traditional bow. So, I got a Super Kodiak. Now, you have to remember that we have some fantastic deer walking on our ranch in the 150 to 170 class. The point I am making is if you are going to hunt with a traditional bow and especially a rookie traditional hunter you are going to have to be patient. I was just that!

I had three deer in the 150-160 class that I passed on because my confidence level was not at the point to take a 25 plus yard shot with traditional equipment. I made up my mind I would only shoot if 100% sure I would make a lethal hit. We work hard at letting our bucks mature and reach that next level, but then that is another story. I felt confident out to twenty yards but was not going to force it. If I had been hunting with my compound, those bucks could have been easily hanging on the wall. In spite of my caution and reservations I did harvest two hogs with my Super Kodiak and I can say, without reservations, I am hooked on the traditional route. The feeling I felt was beyond description, it was so cool to take a wild game animal with traditional equipment and by instinctive shooting. I have been raised in a high tech world and this was a total step back in time.

My Super Kodiak shoots like a missile. As I expected, it is very comfortable to hold in my hand and aim. It is well balanced and light; I am guessing under 3 pounds. I was at the range the other day and a group of folks gathered around and could not get over how quick the arrow got down range. The Super Kodiak comes with a Dynaflight 97 Flemish String. Many bows cannot use this type of string but the Super Kodiak can because of its reinforced tips. The Dynaflight 97 will usually get faster arrow speeds than other strings. (Between 3 to 4%) Not to sound redundant, this bow is an absolute pleasure to shoot.

My arrow choice is by Carbon Express. I am shooting the Heritage 250’s. They have that traditional look and have the Carbon Express quality and shoot like a scud missile.

It has really been fun to experience the heritage of our sport. By no means am I saying to give up your compound. I love the compound bows. But if you want to have some added fun, get a traditional bow and shoot it. Believe me when I say it will humble you and it will make you appreciate what the great Fred Bear has done for our sport. Jump out to www.beararcheryproducts.com to check out their traditional bows. Also go to www.carbonexpressarrows.com to see the lineup of arrows they offer.

Badlands Packs: Made for the Rugged Life