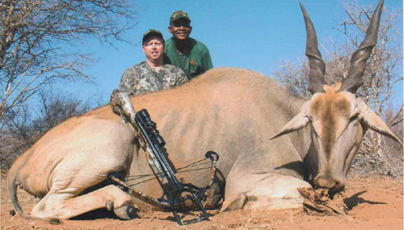 It was the 4th morning of my six day hunt. I had taken an Eland, a Nyala, and an Impala in the first three days so things were off to a good start. After a hearty breakfast we headed out to where a big Eland had been spotted but it was an unproductive morning. We saw many animals but nothing I wanted to shoot. So it was back to the lodge for lunch and make plans for the afternoon.

We decided to go back to the blind we used on the first day. We had seen many animals at this waterhole and there were Zebra in the area. Zebra were not on my hit list but when I saw a zebra rug at the lodge and how gorgeous it looked I decided that if one came in I would take it. Alex drove us to the blind and we got settled in as he drove away. It would be me, Diane and Zewely tonight.

As we sat back and waited for the action to start it didn’t take long before the Kudu and Warthogs started coming in. There was a lot of pushing and shoving as each Kudu protected it’s turf. Even with the huge size difference there were times when a Warthog would stand his ground against a Kudu. They would stand face to face until one would give in and sometimes the Warthog would win. It was fun to watch these animals as they jockeyed for position at the waterhole. There was even a big Kudu bull that had a huge tree branch stuck in his horns but it didn’t seem to bother him, he just kept trying to get to the water.

After a couple of hours watching the show a group of Wildebeest came in. It was quite a fiasco watching the Wildebeest, Kudu and Warthogs all vying for position at the water hole. As I was looking out the shooting port, Zewely tapped me on the shoulder and said he heard a Zebra behind us. We had about an hour and a half of daylight left when I looked out he window there they were. Seemingly coming out of nowhere three Zebras had joined the other animals at the water. One of the Zebras was standing on the edge with his head in the water tank and Zewely gave me the okay to shoot. It was a good quartering away shot but with so many animals in front I didn’t have a shot. I knew they wouldn’t stay for long so I kept searching for an opening. I found that if I leaned to my right I could get by a Wildebeest and shoot through the horns of a Kudu, I could get a shot. I have made this 25 yard shot a hundred times and felt confident I could do it here.

Lining up the crosshairs I concentrated on a spot and watching out for other animals I sent the three bladed head on its way. We heard a loud smack and just like that all the animals were off in a cloud of dust. Keeping an eye on the wounded Zebra we watched it go about 100 yards before being swallowed up by the brush. We called Alex and told him to come back as we had some tracking to do.

After a quick look for the arrow they started the tracking job. They went about 50 yards from the last spot we saw him and there he laid. Alex came back and picked me and Diane up and we drove to the kill. After the usual congratulatory celebration we took some pictures, loaded the zebra on the truck and went back to camp. That night at dinner we made plans to try a different camp and maybe have some better luck getting my dream animal a Gemsbok.

After a hearty breakfast we jumped in the truck and drove the 10 miles to the other camp. We got there and set up in plenty of time and then sat back waiting for the action to start. As Alex got ready to leave he told us a big Eland bull has been spotted hanging around this waterhole but my goal was to shoot a Gemsbok. We were 25 yards from the waterhole and had a good view of the surroundings. We had only been there a little more than half an hour when here the animals came. First the Warthogs, then Kudu and Wildebeest along with a whole array of the many colorful birds.

I was on the left side of the shooting port so he would have to get more in front for me to get a good shot. Just as I was getting ready to shoot something spooked the animals and they all took off taking my prize with them. It looked like my quest for a Gemsbok had failed again but we still had more time. Zewely was looking out the window when he turned and whispered that a big Eland bull was coming in. One look and you could tell this was a monster bull. He lumbered ever so slowly as he made his way to the water. He was coming head on but at 35 yards he made a left turn and was now broadside. I ranged him and ever so slowly picked up my bow. I sighted in and concentrated on the spot I wanted to hit, took a couple deep breaths, squeezed my bow and when things looked good I sent the Parker Red Hot arrow on its way.

We heard the arrow smack hide and as he ran away, Zewely said it looked like a good hit. The big bull went 300 yard and laid down. Alex could not get us right away so we just kept an eye on the bull. About three hours later Alex picked us up and we drove over to the bull. The closer we got the bigger it looked there was definitely no ground shrinkage here, this bull was enormous. Again there was much back slapping, high fives and handshakes. We took many picture as this was a bull of a lifetime.

It was quite a struggle but we got him loaded on the truck and drove back to camp. Alex guessed he weighed about 2000 lbs and he green scored at 94. After the drying period if this score holds up it will be rated number three in the SCI crossbow record book. That night the celebration went on as we sat by the fire and had a few drinks. I still had one more day but didn’t know if I could top this.

Next morning we went to the other camp and tried a different blind. Again we saw many animals but no Gemsbok. It was 80 degrees out and very hot in the blind but we stayed all day. Next morning we packed all or gear, loaded it on the truck, said our goodbyes and drove out of camp. As we were heading back to Johannesburg we stopped off at a local school. As we drove in you could see things were pretty desolate. About 30 kids were standing around me as I handed out the supplies that we had brought. The soccer balls were a big hit and all the kids were trying to get in some kicks. I gave the teacher all the school supplies and she took them to her office. This was quite a moving experience giving these kids more stuff than they get in a year. If you ever go to Africa please take a Safari Club blue bag and bring it to these kids who have nothing. You will definitely get that warm fuzzy feeling of doing a good deed.

Then it was back to the three an a half drive back to the Johannesburg airport. Once there we unloaded our gear, said our goodbyes and got on the airplane for the 16 hour trip back to Atlanta.

Africa is truly a hunters paradise but if you just like to see animals this is must place to go. It was an incredible experience and like my wife said as we were sitting by a waterhole, “It’s Like The Zoo Comes To You.”

For more please go to: The Disabled Hunter