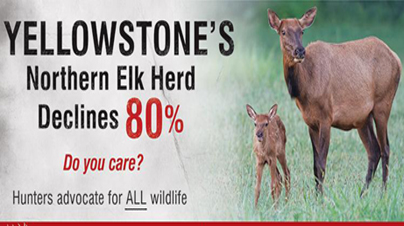 A recent U.S. Fish and Wildlife Service report claimed that overall wolf populations in the Northern Rockies (made up of the entire Northwest corner of the country) have dropped 6-percent since 2011. But, have they really? Sportsmen and sportsmen based wildlife conservation groups aren’t buying the recent numbers. Many would like to know, if wolf numbers are down, then why haven’t big game numbers grown?

Wildlife managers and researchers have come to use the term “predator pit” when referring to an area where predators have pulled prey populations down so low that recovery of those populations becomes impossible, unless there is a drastic reduction in the number of wild carnivores. The situation results from how predators affect prey numbers in two different ways. One is the manner in which predators, especially wolves, kill far more adult prey animals than needed to survive, commonly referred to as “surplus killing”. The second is the destruction of the prey age class, due to the loss of newborn young of the year.

The loss of that recruitment can be either due to outright killing of fawns and calves in the spring (with excessive surplus killing), or due to the stress predators (especially wolves) place on pregnant females in winter, causing them to abort their fetuses. In the classic predator pit situation, a rising number of predators results in a constant decline in prey numbers, with the average age of surviving prey animals becoming older and older with each passing year – to the point that reproductive growth becomes impossible and the prey base begins to die off from old age.

This accurately describes the situation in much of the Northern Rocky Mountains of Montana, Idaho and Wyoming today – a problem that is now beginning to spread into Oregon and Washington.

Through the 1970s and 1980s, populations of elk, moose and other big game had recovered well from the record lows of the early 1900s, and by the mid 1990s many areas of the Northern Rockies boasted record wildlife populations. Through all of that recovery from the market hunting era of the late 1800s, there were still viable populations of mountain lions, black bear, and in some areas even a few grizzlies. The only missing predator was the wolf, or so claimed by the U.S. Fish and Wildlife Service. America’s sportsmen had poured billions of dollars into modern conservation projects, many of which took decades to accomplish, and they had been rewarded with an abundance of game. So much so, that during the 1980s and 1990s many hunters and wildlife viewers joked that “The Good Ol’ Days Are Now!”.

Against the wishes of the vast majority of sportsmen in this country, the U.S. Fish and Wildlife Service began releasing wolves back into the Northern Rockies in 1995. As wolf numbers quickly grew, thanks to federal protection under the Endangered Species Act, the dynamics of the predator to prey ratio likewise quickly changed. When the first 31 wolves were dumped back into Yellowstone National Park (1995-1996), close to 20,000 elk made up the northern Yellowstone elk herd. Today, there are more than 400 wolves within the Greater Yellowstone Area – and the northern Yellowstone elk herd, which is one of several herds in the region, has plummeted to fewer than 4,000 remaining animals. Those that have managed to survive the constant pursuit of wolf packs, some of which are now known to number 20 or more adults, have become a very geriatric herd. In 1995-96, the average age of that elk herd was around 4 years of age, today the remaining animals are an average of 8 to 9 years of age. Calf recruitment in the spring is presently in the single digits.

Yellowstone’s elk herds are dying. And so are the elk herds in many other areas of western Montana, northwestern Wyoming, and the northern half of Idaho. The area is definitely well into a predator pit situation – and the elk aren’t the only big game that’s now quickly disappearing. Moose, which were once plentiful in the Northern Rockies, have become nearly non-existent. In fact, within Yellowstone National Park, they could probably qualify as an “Endangered Species”. Likewise, throughout the entire region, mule deer, bighorn sheep and mountain goat populations are also in serious decline – and the major problem is wolf depredation.

Sportsmen and others who are concerned about the future of wildlife in this once wildlife rich region of the country are now beginning to organize to take on those who seem to have one goal in mind – and that is to put an end to sport hunting. Who are the enemies?

In the eyes of many who have witnessed this wildlife disaster, topping the list is the U.S. Fish and Wildlife Service. We now know that when Congress denied funding for capturing Canadian wolves and transplanting them into Wyoming, Montana and Idaho, USFWS literally stole the money needed for the project from the excise taxes sportsmen paid on firearms, ammunition, archery equipment and fishing gear, through what is known as the Pitman-Robertson Act. These funds are to be used exclusively for wildlife habitat and fisheries improvement. USFWS helped itself to somewhere between $60- and $70-million dollars to finance several unauthorized uses – including the funding needed to dump wolves back into the Northern Rockies ecosystem.

Right there with USFWS is a long list of anti-hunting “environmental” organizations, including the Defenders of Wildlife, the Sierra Club, the Humane Society of the United States, and a few dozen others. These groups have learned to use wolf impact on big game populations as a tool to put an end to hunting. Without a surplus of big game, there’s no need for hunters. It’s that simple. And one former upper echelon USFWS division chief, who blew the whistle on the theft of millions from Pitman-Robertson funds, also says that USFWS has entered into under-the-table agreements with the environmentalists – those who want more wolves, and fewer hunters.

As absurd as it may sound, several of the state wildlife agencies which sportsmen have funded and supported since those agencies were founded have also bought into all the lies, deceit and theft that has now been associated with the Northern Rockies Wolf Recovery Project. As these same sportsmen learn more about all that’s wrong with introducing non-native, non-endangered Canadian wolves into Montana, Idaho and Wyoming, upper management within a couple of these agencies continues the cover up of the damage wolves have already dealt big game populations, livestock impact due to wolf depredation, the loss of hunting opportunities, how USFWS manipulated wolf science to justify the introduction of an invasive wolf subspecies, the true number of wolves in their respective states, and what it is going to take to gain control of this problem.

Sportsmen in Montana and Idaho have become extremely agitated at the inability of Montana Fish, Wildlife and Parks and the Idaho Department of Fish and Game to get a handle on the impact wolves are dealing elk, moose and other big game – and that now becomes very apparent at just about any public meeting held by these agencies. When the topic turns to wolves, angers immediately flare.

Northern Rockies residents who have had to live with those “reintroduced” non-native wolves now for nearly 20 years have developed a severe distrust in just about anything federal and state wildlife agencies have to say about wolves – especially when it comes to current wolf population numbers. The 300,000 or so hunters who head out into the mountains each fall in Montana, Idaho and Wyoming are seeing far less game and evidence of far more wolves than claimed by state game departments.

An ever increasing majority of Northern Rockies residents now realize that the state fish and game departments have artificially reported lower than actual wolf populations, perhaps to mask or hide the true number of wolves. However, the ever escalating loss of the large game prey base has made it impossible for these agencies to keep up the subterfuge. Still, a recent USFWS report claims that since 2011, wolf numbers across the U.S. Northwest have dropped 6-percent. In Idaho, the current “at least” number of wolves is 659, down 14-percent. The present number of Montana wolves, according to the USFWS report, is 627, down 4-percent. While the current number of wolves in Wyoming is put at 306, down 7-percent. The states reporting growing wolf numbers are Oregon, with a 110-percent increase, to 61 wolves, and Washington, with 38 wolves that represent a 46-percent increase.

So, who’s counting all of those wolves? Actually, no one is counting wolves.

The wolf population figures being thrown around as “official numbers” are simply projected figures, determined by computer models. Those models are totally dependent on the data that is being entered into them…which means those models are at the mercy of whatever agenda the individual entering that data may have, or which they were directed to enter. The U.S. Fish and Wildlife Service and the state wildlife agencies within the Northern Rockies have already shown their tendencies to hide just how many wolves there really are…and the degree of impact wolves are having on other wildlife populations. Many sportsmen, livestock producers and rural residents feel the reported decline in the overall number of wolves in the Northern Rockies is based on the same fabricated data which has now literally destroyed many big game herds.

What kind of reduction of the wolf population will it take to allow big game herds to reverse the decline in elk, moose, deer and other wild ungulate populations? One thing that has become very clear is that it will take a far greater reduction of the apex predators than what has been accomplished through “sport hunting” in the Northern Rockies. At most, the so-called management hunts held in Montana, Idaho and Wyoming since 2009 have made no more than a 10- to 15-percent dent in the current population of any given year.

In his May 2008 declaration for the wolf delisting hearing and pending “wolf management hunts”, Dr. L. David Mech stated, “It has not been demonstrated that ‘a substantial reduction’ in wolf abundance will occur, and my opinion is that it will not because merely to hold a wolf population stationary requires an annual take of 28-50 percent per year.”

Mech went on to declare that wildlife agencies outside of the Northern Rockies recovery area try to reduce wolf population by 70-percent annually in order to achieve a reduction in wolf numbers. He was referring to what it takes to keep wolf levels low enough to prevent a predator pit situation in Alaska and areas of Canada. According to this wolf biologist and researcher, who is considered by many to be the top wolf expert in the world, sport hunting as currently being implemented by the wildlife agencies in Montana, Idaho and Wyoming normally does nothing to reduce wolf populations. 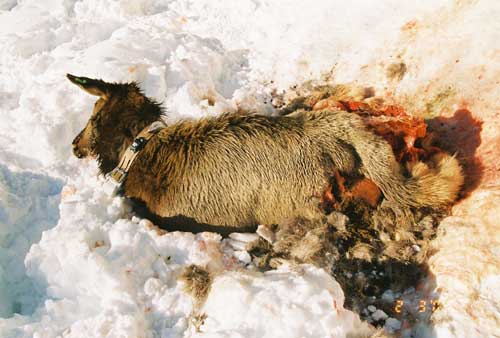 After witnessing the loss of the past 75 years of wildlife conservation in much of the Northern Rockies, it has now become very clear to residents that wolves cannot be managed…and that wolves must be controlled. Sport hunting wolves has proven totally ineffective. To sufficiently reduce the wolf population will likely require aerial gunning, and allowing hunters, livestock producers and landowners to shoot wolves whenever they are seen – day or night, seven days a week, 365 days a year. -Toby Bridges, LOBO WATCH