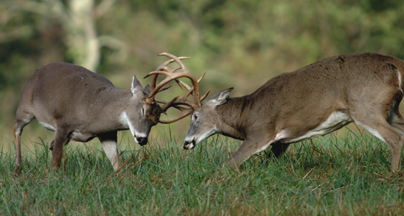 LET’S PLAY A LITTLE GAME of “What If,” just you and me. All it takes is some imagination, a bit of thought, a promise of honesty, and a few minutes of your time. There’s no competition or prizes to win, only the promise of self-satisfaction that comes with examining how you would handle actual bowhunting situations and then justify your actions.
Ready? Okay, here we go.

Hunt #1 – It’s the tag end of November’s whitetail rut and you’ve hunted long and hard without filling your only buck tag. After an unsuccessful morning spent in a favorite stand, you’re on your way back to your truck because you’re due at work by 1 p.m. Then you hear a sudden crashing in a nearby thicket and spot a flash of brown and white. Freezing in place, you quickly nock an arrow and watch in disbelief as two struggling trophy-class bucks push into the clear, their heads down, thick antlers obviously locked together. Within seconds, the big deer are broadside at no more than 20 yards. Immediately, you …

a. Raise your bow and drive an arrow through the largest buck’s chest;
b. Call a hunting buddy on your cell phone and tell him to grab his bow and join you;
c. Shoot both bucks, figuring you can use your wife’s tag on the second deer;
d. Back off, planning to call the local game warden to report the incident and ask for help in trying to free the locked-horn bucks;
e. Other.

Hunt #2 – You’re on your first-ever caribou in northern Canada. As you and your guide cruise the lakeshore glassing for stalkable bulls, you see a group of swimming caribou crossing an inlet just ahead of the boat. Powering forward, the guide yells, “Get set! That last bull is a Booner!” Your heart begins to pound as you nock an arrow, unable to tear your eyes from the huge antlers. And when the boat nears the swimming animals, the guide cuts the motor and shouts, “Shoot him! We’re legal now.” You hesitate only briefly, then draw your bow and …

a. Shoot the bull;
b. Pause and ask if it’s really legal to kill a swimming caribou;
c. Reassured the bull is fair game, you draw and release the arrow;
d. Or shake your head and turn down the shot at the monster white-maned bull.
e. Other.

Hunt #3 – The new farm looks promising. Fresh rubs and pawed scrapes are everywhere. The landowner has given you permission to bowhunt but mentions that a relative also hunts the farm and has hung several stands. Sure enough, you note several portable stands in promising spots you’d like to hunt. And with afternoon shadows lengthening, you decide it’s time to settle in somewhere for the evening vigil. You decide to …

a. Use your climbing stand and take up a vantage point along a well-tracked trail leading to a soybean field where whitetails feed;
b. Climb into one of the relative’s empty stands overlooking several smoking-hot scrapes;
c. Use your climber but choose a tree growing near one of the relative’s stands;
d. Decide to talk to the farmer’s relative and discuss mutual hunting plans and locations in order to avoid getting in each other’s way;
e. Other.

Hunt #4 – The late October sun has set and the woods are darkening as the minutes pass. You’ve seen several deer from your tree but none close enough to offer a shot and now it seems another day’s hunt will end without an arrow released. Finally, you stand, stretch, and are about to un-nock your arrow when you hear a nearby rustling in the leaves and see a dark shadow moving your way. A buck! A good one, judging from the look of his bone-white rack almost glowing in the evening gloom! And he’s already within bow range. Seconds later he pauses broadside not 20 yards away. Slowly, quietly, you raise and draw your bow, settling the top sight pin on the deer’s side, even though it’s now too dark to see the pin clearly or pick an exact spot. What do you do?

a. Take the gimme shot;
b. Wait, hoping the deer will step even closer or perhaps walk directly under your tree;
c. Let down, deciding it’s not worth the risk of wounding and losing the buck;
d. Simply stand motionless, hoping the buck will walk away unalarmed without knowing you’re there;
e. Other.

Hunt #5 – The big-antlered 6 x 6 herd bull is trailing his small band of feeding cows across a grassy mountain park 70 or more yards from where you crouch at the clearing’s edge. You’ve heard his fluting bugles since first light and hurriedly climbed to get ahead of the moving herd before the elk can reach their daytime beds in the black timber above you. And when the dark-maned bull pauses, lifts his head, and screams again – his tawny sides heaving, hot breath steaming in the cool high country air – you shiver and fight to ignore the rush of hot blood drumming in your ears as you ease to full draw. Long hours of grueling physical conditioning and routine shooting practice have led to this moment of truth. And while the bull is standing at or beyond the limits of your consistently effective shooting range, you want this magnificent bull more than any bowhunting trophy you’ve ever encountered. So you hold the bottom sight pin just over the elk’s back and …

a. Take the long shot, hoping for the best;
b. Hold at full draw, waiting to see what the bull does next, praying he’ll move closer;
c. Let down, deciding such a shot simply isn’t worth the risks.
d. Pass up the shot, promising to practice at even longer yardages;
e. Other.

SO HOW’D YOU DO? Feeling good about your answers to each real-life hunting scenario? Think about this.
Every “What If” bowhunting situation printed above actually happened. They involved people who shared their experiences with me. While I won’t tell you what these individual bowhunters did and how they felt about it afterwards, the point is different people will have different reactions to identical situations. In other words, my answers may not agree with yours. And that’s okay, to a point.

Most of us, I’m confident, will not knowingly violate state or provincial hunting regulations. But at times each of us may confront an ethical dilemma, and that’s where individual differences of opinion arise. I’m no different, and personally I explain it this way: “There’s an amber caution light in my brain that begins to blink whenever I’m faced with a ‘shoot or don’t shoot’ situation, or some other quandary that ‘doesn’t feel quite right.’ And that’s when I’ll back off at least long enough to examine the pros and cons of ignoring that is warning me to proceed with caution.”

Regarding the hunt scenario examples, I would never kill helpless deer whose locked antlers prevent escaping. Nor would I shoot a swimming caribou or other game animal, even where prevailing game laws okay such practice. Ditto for using someone else’s tree stand or hanging my own close to another hunter’s stand, which might not be illegal but to me borders on ethical misbehavior. Also, shooting before or after good shooting light is yet another personal no-no. And finally, while I practice shooting out to 60 or more yards, I rarely kill animals standing more than 35 to 45 yards away. That’s not because arrows cannot kill quickly and humanely at longer distances; it’s because I embrace the challenge of getting close to wary game and delivering well-placed arrows before the animals realize I’m nearby. Distance magnifies any shooting mistakes I make. Besides, animals can and do move, and at longer ranges a single inopportune step or slight turn can mean the difference between a lethal hit and a wounded, unrecovered animal. It’s just not something I do. And it’s worked well for me for more than half a century afield.

You should do what consistently works for you, and you’re the only person qualified to make the decisions. As someone once said, “Life is 10% of what happens and 90% of how you react to it.” Also, please keep in mind something I wrote for the 1987 edition of the Pope and Young Club record book: “Any ethical hunter, despite his choice of weapon, is bound by hunting’s written and unwritten laws. He sees the sport’s rich traditions, recognizes their worth, and adopts a personal code of fairness. In short, he respects and cares about the game he hunts, knowing that a trophy claimed without dignity is, in truth, meaningless.”

Fatal Steel: Only From Grim Reaper