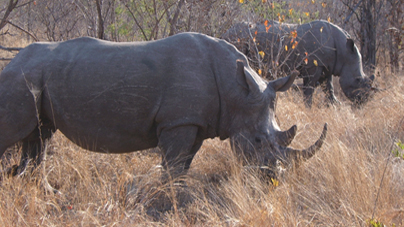 By now most have heard about the rampant poaching of black and white rhinos in Africa for their horns. In some areas, this poaching is devastating. In 2013 over 1,000 rhinos were poached in South Africa, and almost 300 have been killed there this year. In southern Africa where most rhinos live, finding government funds for anti poaching is extremely difficult. In some areas you may have only a handful of officers trying to fend off poachers in an area the size of West Virginia.

When I was bowhunting in Zimbabwe in the 1990’s, many of the private ranchers there hired their own poaching patrols to try to protect the rhinos, even though those animals provided no economic benefit to the ranchers. They just did it because it needed to be done to save the rhinos. They still do it.

Though white rhinos get poached, the black rhino is the species that is rather rare and endangered. Every year Namibia auctions four-five black rhino hunting permits to their own citizens, to raise funds used to manage the animals. Each permit brings in between $100,000 and $200,000. A few months ago, Namibia, with the blessing of scientists’ world wide, and the International Union for the Conservation of Nature (IUCN), agreed to provide one permit to the Dallas Safari Club to auction off a rhino hunt. Understand that in all instances where rhinos are hunted, the oldest, most aggressive males are selected. These animals are dangerous to other rhinos, and past their breeding prime.

It was expected that the winning bidder would pay from $500,000 to $1 million for the permit. That’s big money when it comes to anti poaching and rhino management. So far, rhino management in Namibia has been relatively successful compared to other southern Africa countries. The Namibia black rhino population (estimated at 1,700) is growing at a small rate, but there is the threat of poachers is increasing. There are always threats of poachers using helicopters and poisoning water holes to kill rhinos. The government spends $200,000 to capture, collar, and DNA type 100 rhinos each year as part of their research. They also census animals in national parks. Etosha National Park is a beautiful, wild place, the size of Connecticut. I’ve been there and though very dry, it is a wonderful park that brings in thousands of tourists. Counting rhinos there and in other parks is essential to their survival.

All this cost’s money. Money that can make Namibia a place where poachers do not want to go. But as soon as the announcement was made that a rhino permit would be raffled off by the Dallas Safari Club, the antis came out in droves. The Humane Society of the United States opposed the auction. Bob Barker, of The Price Was Right got it all wrong. He usually does. His opposition to this permit really hurt the rhino management process in Namibia. He didn’t care. The threats to the bidders and their families, including children were rather chilling. Most bidders dropped out rather than put their families at risk.

The high bid was $350,000, and these funds will go to the projects and anti poaching activities mentioned above. The antis, including the Humane Society of the United States, are trying to prevent the U. S. Fish and Wildlife Service from giving the hunter a permit to import the rhino, once it is hunted in Namibia. On their website they note that the Endangered Species Act “makes it clear that such permits should only be granted when the import will enhance the survival of the species in the wild.” Of course that is exactly what the government officials are doing with the granting of this hunt for one rhino. But if the U. S. Fish and Wildlife Service fails to issue the import permit, the Ministry of Environment and Tourism in Namibia will be short $350,000 for rhino management and thus, they’ll have to cull several more rhinos to get the money needed to get their scientific studies and poaching control work done.

Hunting a few of 1,700 black rhinos is a practical solution. The scary part of this whole management story is that there are thousands of people in our country that want to kill the hunter who paid $350,000 for the hunting permit. Diana Rupp, in an editorial piece in Sports Afield magazine noted that “reasonable people who care about wildlife can separate facts from emotion.” Just as she did, I’m here to remind you how hunting benefits conservation, even for endangered rhinos.