by Michelle Harmes
in Bowhunting Posts
0 0
A A
0 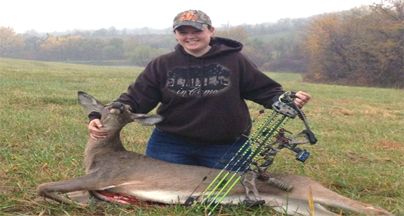 My first trip to Missouri began with a flight from New York. Normally I like to drive to hunt so I don’t have to condense what I bring but flying was easier this time since it was an archery hunt and a very far trip.

I arrived at the Kansas City Airport and waited for fellow Ladies In Camo staff Heather Lininger to pick me up along with another hunter that had arrived. We piled in the SUV loaded to the brim with ladies and gear along with a trailer behind us.

We headed north to Northwest Missouri Outfitters located near Denver, MO just south of the Iowa state line. There are giant deer roaming this area. The lodge is great with everything a hunting camp needs, a bathroom in every room – you can’t get better than that with a camp full of ladies! The lodge set up on a hill with a beautiful view from the large front porch, a very large kitchen and a cozy area to sit and visit in front of a fire.

The morning of the first hunt we all geared up and headed out with our guides. I was dropped off first in the pitch black. When we drove by my stand it looked like I was going to be sitting in the Eiffel Tower, I had never sat in a 20+ foot stand before. I was thankful it was dark and I couldn’t see the ground as I climbed up and got settled in. The stand was located in a corn field that had been harvested with a road that ran close to my stand so a truck was nothing new to the deer.

I sat in the dark waiting for the sun to come up. As it grew lighter I was amazed by how much I could see from my stand. Just as the sun rose 3 bucks came into the field from the woods to my left about 150 yards from my stand. Perfect for a gun hunter but I had to sit and watch as they walked away. It was too difficult to tell the size but they were younger bucks and not shooters. I sat in that stand morning and after lunch till dark. I counted 17 deer, more than I have ever seen in one trip much less one day.

The following morning I saw many does but no bucks. October is still the early season for Missouri so they were not in Rut or even pre rut.

That afternoon I was dropped off at another stand, it was a in a great place with giant trees and a pond about 40 yards up a small hill. It was a great location. There was just one problem, OK there were two. The tree was too big for me to swing my safety tether around and the ladder had no arm rests. I had to climb up and down the stand 3 times to try and get mentally focused on getting settled in even though when I first climbed up everything in my head screamed “Get down, get down NOW!”

I could not shake the feeling that I wasn’t supposed to be up there. I text Dave, the owner of NWMO and guide who dropped me off to ask permission to hunt from the ground.

I need to add here that you NEVER get down from your stand and walk around without permission, EVER. You are on someone else’s land and you don’t know the boundaries or the patterns of the deer. Always, always ask permission even if you want to walk to the road. You don’t know where other hunters are and you don’t want to disturb their hunts.

I was given permission so I stalked up to the pond and dropped to one knee by a small group of trees to assess the situation. To my left on the opposite bank of the pond there was a large pine tree and I could see deer legs under the branches. The deer were up the slope feeding. I settled in to wait and ranged everything in sight. One spot in particular stuck out to me. It was a foot and a half wide clearing behind me between many small trees and led down a sharp incline to a wide path. The path was exactly 20 yards away. I knew this because I ranged it three times. Something in my brain told me there was a good reason to do so.

About 20 minutes later more deer came to feed. I saw many legs. One doe came around the pine tree and didn’t like the bump on the tree that wasn’t there before. I was that bump. I was leaned up against two trees, perfectly camouflaged but she sensed something was up. After much head bobbing (she looked like she was trying to spell words with her head) she decided she had enough and jogged down the slope past the pond and turned down the wide path. I drew when she was behind a tree and put my sight at 20, right where I had ranged between the trees and waited. She entered the clearing and I let it fly. In my excitement I forgot to make a noise to have her stop but at this point everything was just flowing together like it was written in a story I was living out.

The arrow passed through her kidneys and she continued to jog. The blood was gushing out like a 2 liter bottle on its side. She didn’t go 20 yards and crashed. It was an amazing feeling. Everything came into place like it was always supposed to happen that way.

I moved my position a little so I could watch her and make sure that no predators came in. It was still early in the evening and there were a couple hours left till pick up time. It’s a strange feeling to guard your kill from afar and wait for a buck at the same time. There were other hunters around so I didn’t ask to be picked up but checked in that I had one down.

Close to last shooting light it started to pour huge rain drops so I packed up my gear and went and sat by the largest doe I’ve ever shot. This was my first Midwest hunt and compared to Alabama/Georgia deer she was huge! She had landed not 10 yards from my original stand.

I will also add this here, DO NOT attempt to recover your own animal when you are on a guided hunt! Wait for your guides!

I was picked up and we loaded her in the side by side. We got back to the lodge and they estimated her at 150 pounds. We gutted her right away but waited to process so I could get pictures in the light, luckily the nights were cold and allowed for that opportunity.

As the day ended I could only say that I was thrilled that I had taken a mature doe, they are very 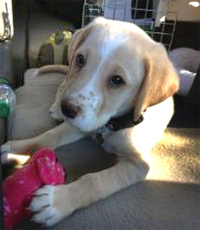 smart creatures and one other exciting thing happened this day, my dog Kodi was born. I got her from one of the guides at NWMO. Pretty amazing day in my book! I will never forget that day.

The rest of the hunt was great, I didn’t get a shot opportunity for a buck but I will return to NWMO and get one of those monsters that they have! I met many ladies with a passion for archery that weekend and it is so great to have friends that share my passions. The guides went above and beyond for the ladies. I can’t wait to share camp with all of them again.

Field Dressing Easier With Buck UP

Field Dressing Easier With Buck UP

The Objectives and Values of the Records Program

Is It September yet?