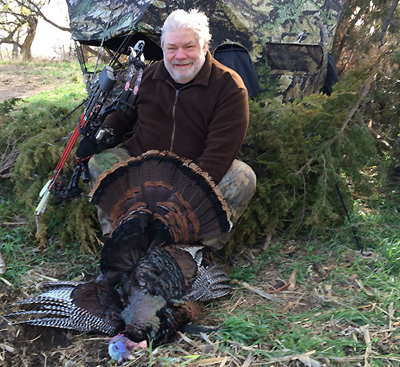 Fred Lutger Reports On Our First Morning Bowhunt In Nebraska.

Wow! It’s cold! This is supposed to be spring. Every year I look forward to wild turkey season and God’s awaking of the great outdoors. The only warm thing this morning in norther Nebraska is that great feeling of filling my turkey tag. And today it’s twice as good. Not only did I fill my first Nebraska turkey tag, I also got to video and watch my good buddy Robert Hoague shoot his first Nebraska Longbeard for 2014, too.

At day break Robert and I sat on the east end of a picked corn field. Good friend and host Terry Marcukaitis set up a Double Bull blind for us a couple days ago. I have hunted this same field many times over the years. Terry brushed in the blind next to a tree backed up by a big brush pile, it is 30 yards from the field’s eastern corner. 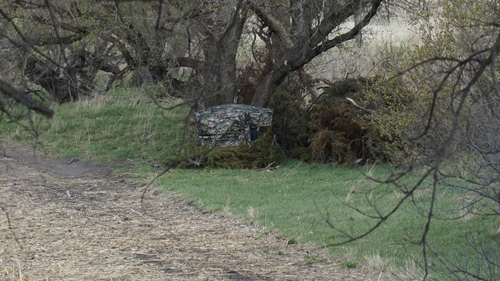 The field is a stop off point between the roost area and rolling hills along the Keya Paha river. The turkeys spend their day roaming the pastures and cedar trees along the river.

Most years the weather has warmed up after the winter. But this year winter hangs on. And this morning we were feeling the cold, made worst by the steady 27 mile an hour wind. We layered on all our shirts, vests and jackets and sat in the cold blind waiting for daybreak. It came soon and we heard yelps and gobbles from the roost area to the North. This morning I pulled video camera duty and Robert is bowhunting.

Wild Turkeys started filling the far end of the field. Hens headed our way. Red heads followed. They headed straight to our location and the two Dave Smith decoys we had out. Several jakes met the hens and mulled around our decoys. 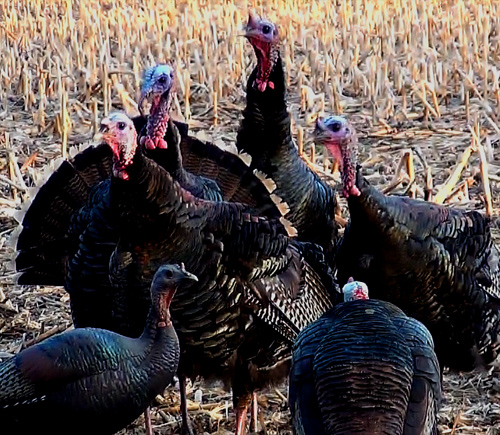 I videoed the hens and jakes and looked back to the opposite end of the field and saw 3 full strutting long beards heading our way. I turned the camera away from the birds in front of us and started videoing the approaching Toms. They were 60 yards away. Robert drew back his bow. I thought he was warming up. He surprised me when he shot. I immediately turned my camera on a wobbling gobbler as he went to the center of the field. I looked at Robert and asked why he shot a jake.

“It’s a long beard!” Robert exclaimed. It had come in from right as I was videoing the other birds.

The longbeard toms I was videoing raced for Robert’s wounded gobbler and attacked it. But I’ll let Robert tell his story and continue my own hunt.

I passed Robert the video and tripod and got my bow. Soon I saw the two gobblers approaching but couldn’t see their beards.

I thought they were jakes. They approached the decoys and the closest one fanned and went  into a full strut. He had a full mature fan. And in the center of his tuft of beard feathers were long strands hanging down. This was the first morning of our hunt and I did want to shoot a mature gobbler. This bird was a mature gobbler.

I got ready to shoot. The first bird walked up to the hen decoy and straddled its tail. 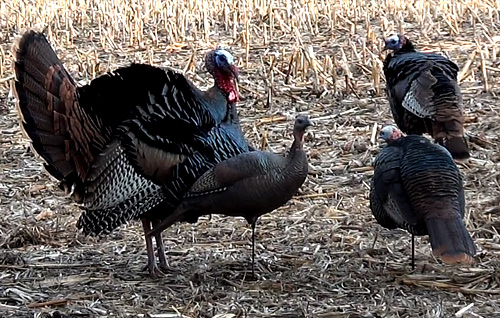 And jumped right on the decoy’s back. 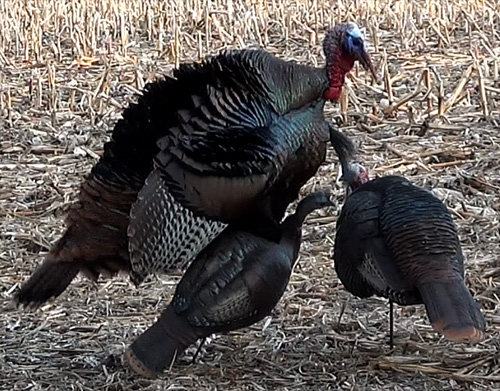 It wrapped its wings around the decoy and got ready for the dance. The hen decoy’s stake  couldn’t handle the commotion and the decoy fell on its side. The longbeard was still all about the dance. 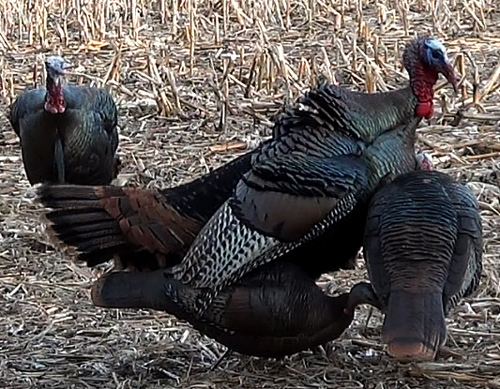 The gobbIer was broadside. I took careful aim. My arrow sunk to the nock. The  gobbler dropped to the ground and fluttered between my hen and jake decoys. The second longbeard ran up and jumped on the hen decoy’s back. 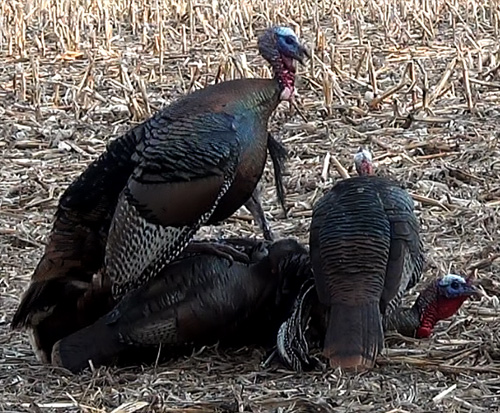 I wasn’t thinking. If I had been ready I might have gotten a double. The first tom flapped it wings hard and fast and that spooked the other tom. He jumped off the hen and raced out of range. The first gobler stopped flapping and was still. Dead in seconds, laying between the decoys.

One thing was certain, my first Nebraska gobbler of 2014 was ready to tag.

My arrows have Grim Reaper Whitetail Special broadheads. I shot 3 longbeard gobblers with it and watched them all drop. They call it the Whitetail Special but I call it the Turkey Special. It does a lot of damage on the initial hit. Wild Turkeys can be difficult to find if they fly or run out of sight so you want to see them go down. With this head I normally see them drop in sight.

My bow is a PSE Archery EVO 7 and it’s been on a lot of hunting trips and received plenty of bumps and bruises from airplanes and pick up truck beds. I always shoots dead on for me.

Double Blue Ground Blind: If you bowhunt for wild turkeys Double Bull is worth its weight in gold. Turkeys don’t pick up the movement. And if you video it has the right placement on it’s windows for videoing. I’ve used cheaper blinds but they aren’t made as well or as quiet.

CALLS: I used the Commando Pro Staff Series and it had a true turkey sound. I used the glass and slate calls and received instant answerers from gobblers with both. They called in a lot of gobblers on this hunt.