by Tracy Breen
in Bowhunting Posts
0 0
A A
5 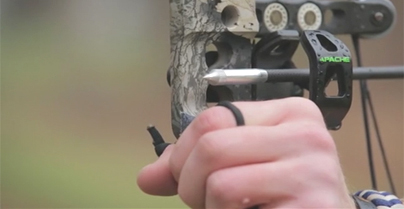 The job of sighting in a new bow sight is about to be much easier, thanks to the UNO iPhone App from Full Flight Technology, maker of the Velocitip system.  The app delivers scaled sight marks in a smart phone display after the user provides performance data and a couple of dimensions measured from their peep sight. Bob Donahoe, Full Flight Technology’s CEO said the app is called UNO “because an archer can shoot their bow at one distance to fix a first sight mark or pin position and then enter the data into the app. The UNO app gives the archer pin gaps for the rest of their pins. With the pin gaps being set automatically, the job of sighting in a bow will take less time. It also removes human error from the process,” Donahoe said. By removing human error, pins will be set perfectly every time which should give archers more confidence and better accuracy down range. “Velocitip data is not required when using the app but will deliver the most precise results,” Donahoe added.

To bring the UNO App to market, Donahoe is relying on the crowd funding site, Kickstarter. Kickstarter is used a lot in the tech world to bring new gadgets to market so it is fitting that the UNO iPhone App takes the same path. How Kickstarter works is that you pre-order the product and receive something in addition as a reward for the early support. For the UNO campaign, any backer who pledges $10 or more receives the app and more. For example, you get to test drive the Velocitip System and join Full Flight’s test team for the UNO at certain pledge levels of $100 or less.

The Velocitip electronic field point is also the brain child of Bob Donahoe. The field point is part of the Velocitip System, a bow tuning device currently used by archery’s top field editors and pro shops because it delivers a wealth of great information including arrow drag, time of flight, impact speed and retained energy. So a chance to try it yourself is a great opportunity. You can also back the project for as little as a dollar. Big donors can receive private archery lessons from a pro archer or even go on guided spring or fall turkey hunts.

The goal is to raise $25,000 with the help of Kickstarter. More than $8,000 has already been raised with over 30 days to go before the campaign ends. “Although we plan to start with UNO for the iPhone, I expect that success with the Kickstarter campaign makes a quick follow-on for Android quite likely,” Donahoe said. Whether you want to improve your archery game or keep it at the top, checkout the UNO iPhone app at Full Flight Technology.