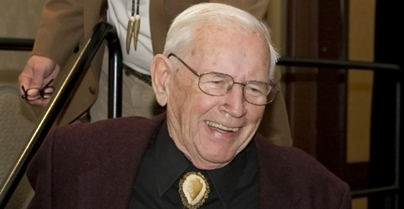 George passed away peacefully at 4:00 AM this morning.

Saying he will be missed is an understatement. Our memories of his kindness, his smiling face along with the joy he just carried with him will last us all the rest of our lives. George never an ill word for anyone, if there were misunderstandings, they were forgotten before they began.

His many archery deeds, financial or his presence were always a highlight. Always with friends who loved him, never bragged about his good deeds. Just quietly enjoying his life and the many friends in archery, golfing, bowhunting, fishing, at shows or at the corner tavern celebrating a friendly get together, George was always the brightest light.

His family, Betty, his wife of perhaps 60 years, his daughter Kathy and his youngest, Tammy brought great joy to his life and our condolences and support go out to each. His constant companion Bob Hodge, Tammy’s husband was a great comfort to George. Bob brought him to Dave Richey’s memorial in Traverse City and to the home of Kay Richey. It was a touching gathering of close friends and his Diana’s as we celebrated our last gathering. George was very happy, enjoyed being the center of attention, being interviewed as he sat among the many hunting trophies of Dave and Kay, reliving the many hunts we had all shared.

It was George Gardner’s persistence and encouragement that started the First All Ladies Bow Hunters, soon to be known as The Diana’s The Goddess of the Hunt. The group was organized by George in 1986 and was the beginning of many other Lady Hunt Clubs.

George was a sales rep and a friend to Bob Eastman and his Game Tracker company. Eastman sponsored the first all paid bow hunt for the Diana’s at his famous Tens or Better Camp in West Branch Michigan where George brought together 14 of the most famous lady archers and bow hunters in the U S. History was made on this Hunt.

All of George’s many advancements for archery, starting with the Ben Pearson company in the early 60’s, with Jack Witt as his Sales Manager. George was very involved in the first Ben Pearson Open. Setting up and so much more, Betty, his wife was the scorekeeper.

We all grieve his loss to all who cared,