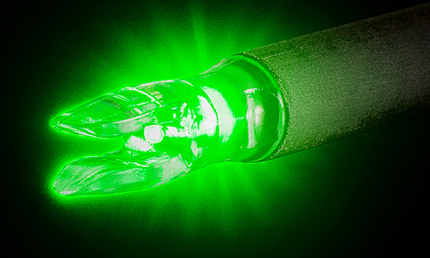 As a result of changes to the Club’s By-laws that passed a vote of the Board of Directors and passed ratification by the voting membership, standard lighted nocks and bow-mounted cameras will be exempted from the “no electronics attached to the bow or arrow” rule.

Since the late ‘80s, the Club has had bowhunting equipment definitions and Rules of Fair Chase that state “no electronics attached to the bow or arrow.” This is part of the Club’s By-laws constitution and governs the acceptability of animals into the Club’s Records Program.

“I was pleased to see such a large percentage of our voting members chose to change our by-laws to allow lighted nocks and bow mounted cameras,” says Jim Willems, President of the Pope & Young Club. “It is generally accepted that such equipment does not aid in harvesting an animal and can actually enhance the overall hunting experience. It’s good to get the issue behind us and move on to other important matters.”

This change is the result of much internal discussion and debate. The exemptions read as follows:
RULES OF FAIR CHASE #7: [Not] by the use of electronic devices for attracting, locating or pursuing game, or guiding the hunter to such game, or by the use of a bow or arrow to which any electronic device is attached, with the exception of lighted nocks and recording devices that cast no light towards the target and do not aid in range finding, sighting or shooting the bow.

DEFINITION OF A HUNTING BOW, EXCLUSIONS #2: Electronic or battery-powered devices shall not be
attached to a hunting bow, with the exception of recording devices that cast no light towards the target and do not aid in range finding, sighting or shooting the bow.

DEFINITION OF A HUNTING ARROW, EXCLUSIONS #1: No electronic or battery-powered devices shall
be attached to the arrow, with the exception of lighted nocks.

“Fair Chase bowhunting is at the top of the list for the Pope and Young Club. Recently the Club’s membership voted to allow lighted nocks and bow mounted recording devices, changing a longstanding rule of no bow mounted electronic devices for an entry into the Club’s Records Program,” says Ed Fanchin, Records Chairman for the Pope & Young Club. “This rule change does not in any way change the definition of Fair Chase bowhunting, nor does it assist the bowhunter with taking an animal. The integrity of the Records Program must always be maintained and is not compromised with this rule change. The Pope and
Young Club has a responsibility to protect the primitive aspects of bowhunting and at the same time we must also embrace change.”

This change will officially go into effect on August 1, 2014, as new Fair Chase Affidavits are created and distributed to our corps of volunteer official measurers. The change IS RETROACTIVE — meaning that animals previously taken, as well as those taken from this point forward, will now be eligible to be entered into the Records, provided they meet all other conditions/criteria.