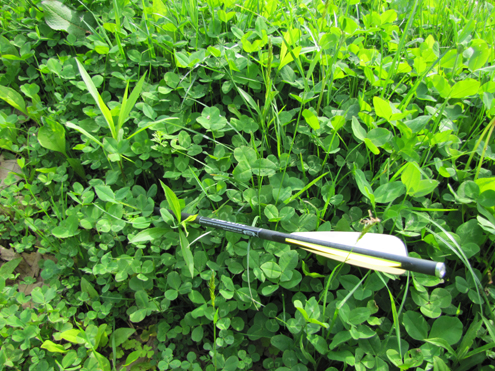 Food plots are one strategy men use to justify being in the woods. It is a good plan because food plots, unlike scouting, require lots of equipment and planning. We need things like disks, quads and tractors. Moreover, if we whine enough and explain that the winter’s food supply comes from those food plots in the form of organic venison, then we have an argument. But exactly what, when, where and why must we food plot? Let’s begin by focusing on the when. I prefer to put in my spring clover plots before May 1, during the month of April.

April food plots are my favorite for a few reasons. Sometime in mid-April, we begin to get a lot of rain in the east. Rain is important but not until after we get the seed on the ground. Prior to spring rains I like to light till or disk my plots. This time of year we are still experiencing a lot of frost and the moist earth forms tiny spikes as it freezes. These ice spikes separate the soil and allow the seed to fall (gravity facilitates this action) into a position just under the soil surface. When the frost melts, we have moisture and seed/soil contact. That allows the magic of germination to happen.

Clover plots are by far more successful when planted in April. The spring moisture in the soil may be the highest of any time during the year. Wet is good plus the sun is climbing higher and the soil is warming. Clover is OK with cool temperatures. What it really doesn’t like is hot and dry.

Another benefit of spring clover is that the weed seed bank has not yet exploded and if clover can get a start and canopy over, it will deprive the weeds of sunshine. Clover is aggressive. In the end for a total coverage situation you need only one viable clover plant every square foot. I typically have 10-15 clover plants competing within a square foot of plot. Add this to the fact that clover may yield 15-27% protein and you have the best food plot solution out there. 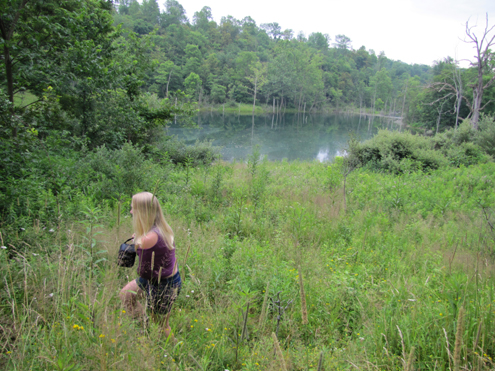 We just conducted a spring clover planting on my farm in Ohio. I chose a hillside overlooking a lake. Last fall I had it bulldozed off. Look at the difference. This food plot is adjacent to both a Black Angus pasture and dog-hair-thick sanctuary.

I had a crew led by Duane Prussia plus my son Cory and friends. We used a quad to pull two rakes that we hooked up in tandem. We then added weight with two logs. Wow!, Did that setup ever work well. We drug the rakes across the center of the plot. The rakes reached down 3-4 inches and made the field look cultivated. The clover enjoyed this spring a lot because look what happened.

Clover is among the highest yielding forage crops. One study suggested that in healthy food plots you might get as much as 3 to 4 tons of forage per acre/per year. Clovers prefer well-drained soils with moderate or good levels of Ph. Plus they pump nitrogen into the soil.

On my farm, which was once power-tilled during strip mining, the Ph is a remarkable 6.8-7, without touching it. That is the benefit of churning up the earth down to 60-80 feet. Above my lower lake, the soil is well drained and has an eastern exposure. This exposure is good because it catches the AM sun and not the direct hot afternoon sun. Clover does not like dry or wet conditions. Actually, my shaded woods-trail plots do remarkably well.

Clover seeds are tiny and number about ( 250,000) ¼ million seeds per pound. With a seeding rate of 4-6 pounds per acre and 80% germination, you are looking at many small plants feeding your deer. Red clovers are the tallest and largest of the varieties and white clovers are the short guys. I like to mix them and create clover insurance.

Reds have a taproot system and it’s important to get the rood established before the top of the soil dries out with summer weather. That is another reason to plant clover in early spring.

Red clover has been studied extensively. Here is some interesting root data from a study. Clover is resilient because of its root system. From a spring planting to the middle of August of the first growing season, the plants had blossomed, and some were red with ripening seed. “They were about 13 inches tall and had from 3 to 13 stems from each root. Several taproots, 5 to 7 millimeters in diameter near the soil surface, were traced to depths of 4.5 feet. These tapered so rapidly that at a depth of 9 inches they were only a millimeter thick.

Frequently, as many as 10 major branches arose from a single root in the surface 8 inches of soil. They ran horizontally or slightly obliquely, 4 to 12 inches before turning downward, where, tapering rapidly, some of the longest reached depths of 3 to 4 feet. In addition to these laterals, the first 6 to 12 inches of taproot were clothed with very numerous smaller branches 1 to 7 inches long. The taproot was prominent throughout and, in general, pursued a vertically downward course.” To get full coverage on your plot you only need one viable plant per square foot. We have much more than one and that’s OK. 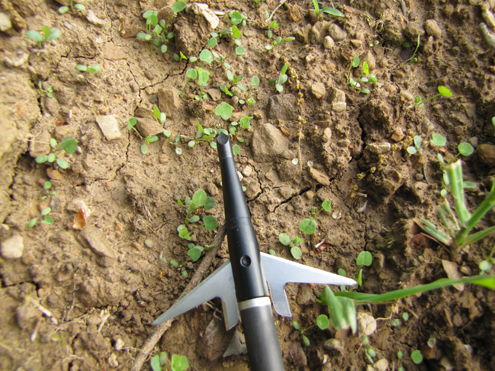 The first pic with the arrow is of a 2 year old clover plot where we began with a heavy concentration of plants. The next pic is of a 3 week old stand of clover right after germination. That Swhacker broadhead is 2 ¼ inches wide. That makes the pic view about 6X8 inches or about 1/3 of a square foot. Note the amount of germinated clover plants. It only takes one plant per a sq. foot to achieve total coverage.

Cutting clover is important. I like to brush hog mine in late June and again in late August. When a clover stem is cut, it grows back two or more vertical shoots. This is the magic of clover. The more you manage it the thicker it gets. Cutting actually increases the tonnage per acre. In addition, deer will target clover as the sun melts snow holes in your plot. Deer hooves have stomped this tiny hot spot.

So when do you plant clover? Early in the spring is always the best time. Clover is an amazing food plot plant if your Ph and expectations are high.

15% OFF Everything at 60X Custom Strings: Father’s Day Sale