The Truth about Crossbows

There is a Crossbow explosion across whitetail country. Just as the compound bow made bowhunting more accessible, the crossbow has opened a door to younger, older and time pressed outdoorsmen. When I ask hunters if they are bowhunters the main excuse I hear is that they would if they had more time. They just don’t have time to practice. The primary benefit of a crossbow is that it is easily mastered and very repeatable. Just like your 30.06 rifle, it is not necessary for a hunter to shoot ten shots a day for two or three months to arrive at a place where he can accurately hit a deer in the vitals or a hog.

Crossbows are similar to rifles in that they are easily steadied and require careful sighting in, but once on target, the hunter may need to only shoot a few shots to verify the arrows are flying where aimed, then go get into a tree. Yardage judgment is just as critical as with a vertical bow. However, once you know the yardage, groups are traditionally tight. That translates to more accuracy and more kills that are humane. All ethical bowhunters agree that well placed arrows are important. Across America, state DNR’s are adding crossbow seasons each year and more hunters are taking advantage of bowhunting.

Once crossbow manufacturers designed bows that shoot accurately it became the hunter’s responsibility to find out which crossbow broadheads flew true. Just like with any arrow, it is important that the broadhead not have big exposed blades up front, which tend to steer the arrow, leading to loose groups. This is especially true with fast arrows. The answer is to shoot a mechanical.

Yet there is another challenge. High poundage crossbows store and unleash tremendous kinetic energy at launch. I have tested many mechanicals with slow motion cameras as they were launched from crossbows. Many mechanicals experienced premature blade opening at launch. These opened blades cause the arrow to fly like a paper airplane and sacrifice accuracy.

A relevant question I hear often is, “What mechanical shoots well out of a high poundage crossbow?” I tend to do the science and that is the course I took last spring at PSE’s test lab and shooting range in Tucson, AZ. I had to find the answer to the question, ‘will the launch open the blades and compromise accuracy?’

Under the big studio lights and in front of the $70,000 digital slow motion camera I discovered the truth. We wound the camera up to a 5000 frames per second and beyond. Some mechanicals failed on the first shot others failed on the second shot. One never failed.

Once we determined if a mechanical would stay closed at launch we had to test long-range accuracy. We are shooting the world’s fastest crossbow, the PSE Tac-15. My testing and shooting partner is a rocket scientist and bowhunter named Rick Forrest. He is the designer of Swhacker Broadheads. First, we zero in field points at 80 yds. That is a long shot. We set up 6-inch balloons as targets.

First, we shot a 100-grain field point and zero in at 80-yards. Then we screwed on the new 100 grain red practice head that Swhacker includes with their 3-pack of broadheads. This test head does not open under any circumstances and as you see, it flies like a laser beam.

Proof is in the pudding. Swhack and pop, One balloon down.
Now let’s look at the Silver Swhacker Crossbow head’s performance at 80 yards.

This is a real test as the PSE TAC 15 is launching arrows at over 400-fps. To make a perfect shot at this yardage the head can’t open at launch and the head must be aerodynamically perfect.

What do you see? The crossbow was dead on at 80 yards with all three. Now you can trust at least one crossbow broadhead this fall. The best bowhunters rely on the science. 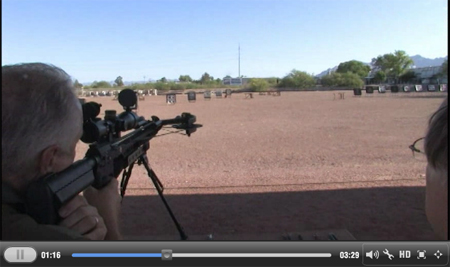 ‘Whitetails From Ground to Gun’ Now Available as eBook

'Whitetails From Ground to Gun' Now Available as eBook