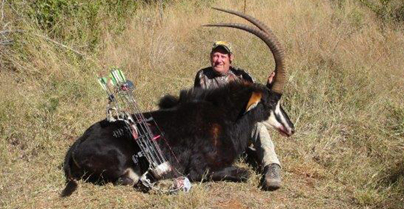 By: Jim Fitzgerald Colorado, USA
On arrival at the Dries Visser Safaris home property of about 12000 acres, I was met by Willem, my PH. After depositing my luggage in the chalet, Willem said “If you are ready, grab your bow and let’s go hunting”.

We drove a good part of the property and saw many animals including Gemsbuck, Kudu, Impala, Wildebeest, Zebra, Giraffe, Warthog, Blesbok, Eland and much more. I thought if given the chance, I would like to take a Zebra and/or a Wildebeest and my primary target would be a Sable.

Toward the end of the second day 2 Sable bulls came in – they stood off at about 75 yards and began to fight. They went at it like a couple of Titans for about half an hour pushing each other back and forth, clashing their great horns, neither wanting to give in. Finally the younger bull tired and wandered off while the larger bull came to drink. He was a magnificent bull but never gave me a broad shot.

While I chose to pass on the first Sable my luck changed on the second day. About 10:30am another big Sable bull came in from the side and unlike the first bull, gave me a perfect 20yards shot. My release felt good but I thought my arrow hit a little farther back. Willem was videoing the action and on replay we could see I was correct, the shot was about 6” back.

At the hit of the arrow the Sable took off in what appeared to be a death run. I consider myself a good tracker and along with the other trackers we set off on the spoor. I thought they were leading me on a wild goose chase when one stopped and listened to something. The Sable was behind a big bush and suddenly busted out, blood running down his side and was gone again into thick brush. We tracked him until dark and then took up the spoor again the next day. After exhausting every attempt on the ground to find the bull we decided on a helicopter. At this point I mad at myself for the shot and was afraid I was going to lose my bull. Flying low over the bush I caught a glimpse of something black and white and slightly out of place. We circled back and sure enough, there was my Sable in his final resting place.

I could finally let out a sigh of relief and put my hands on this beautiful animal. I said a prayer of thanksgiving and gave Willem a very big smile, letting him know how happy I was. I slept very well that night!

For more go to: African Safaris

One Day Later At The Tall Grass Area