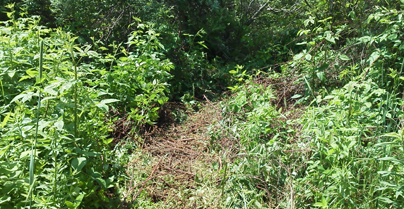 My arms were shredded from thorns. Dripping blood and pouring sweat- I was incredibly uncomfortable. I swear the local deer and horse fly communities were having an “all you can eat” buffet on my arms and head, yet I was strangely satisfied. I earned this sweat and these scars and had big hopes for the deer I’d earn here come fall as well.

A lot of people talk about how much behind the scenes work goes into deer hunting. As far as I’m concerned, planning and implementing summer foodplots is right up there at the top of the list. I look at food plots in two ways; feeding plots and killing plots. Feeding plots are often big, in high traffic areas aimed at supplementing local food sources and encouraging deer to hand around. Usually I plant these types of plots in the spring and generally tend to sow clover or alfalfa in them. I like feeding plots because they’re relatively easy to put in. We have the local farmer till spots for us and really all I need to do is sew the seed and mow the clover now and then. I generally don’t hunt directly over these plots but rather just know that they keep deer in the area.

Killing plots- now that’s a different story. I do hunt over killing plots and therefore attack them from a whole different angle. Killing plots need to be tiny, easily accessible to the deer and near bedding areas. There are the spots where a buck will feel comfortable feeding during daylight. Once a good location for a killing plot has been located, one crucial thing is left to decide, how to hunt it? On this particular outing I made two killing plots. One I’ll hunt from a giant, thick pine tree and other from a brushed in ground blind.

The first step in the construction of my killing plots required a chainsaw. I parked as close as I could, then grabbed my cutting gear, saw and extra mixed gas for the hike back in. In this case I only had to walk back in about a half mile. But, while wearing chainsaw chaps and a large safety helmet, plus the saw and gas, it felt like a lot longer hike. When cutting in the summer months I try to be very liberal and cut anything I think could be a problem. Mother Nature has a funny way of making July cuts look like they never happened come October. I cut wide access trails for me as well as entrance and exit routes for the deer. From past experiences I know the deer will use my trails as well so I made note of a few alternate routes if necessary. I also cleared out any overhanging branches, dead brush, bushes, etc… that could get in the way of my plot. Overall I cut a lot with the chainsaw!

The next step was a hike back to the truck to get my trimmer. I also re-hydrated and grabbed a snack. I returned with the trimmer and extra mixed gas as well just in case I use up more than a tank worth. I trimmed all my trails and the plots themselves. If the spot is really hard to reach, most people will stop here for now. I returned to the truck and brought back our old “brush” mower. Our brush mower is a walk behind brush hog that we acquired from a friend. My dad’s been able to keep it running over the years and it’s a real work horse. Before we had the brush mower, we used an old push lawn mower set as high as it could go. Before that- we simply trimmed all we could. So… depending on what some have been able to accumulate- a trimmer may be as good as it gets. I somehow was able to navigate the brush mower back to the plots and mowed them both thoroughly.

The next step is raking the debris out of the plots. I ran out of time on this excursion so the next time I return I’ll bring a rake. I generally just rake whatever I can out of the plot and throw it in the weeds. After clearing the plot and waiting a few weeks for everything to “green” back up again, I return with weed killer. I bring a garden sprayer and sometimes two filled with an intense mix of weed killer and water. I liberally spray everything left in the plot, and then return a few weeks later to spray again. At this point, it will have been a month since I first created the plot.

Not long after the second spraying I’ll seed the plots. Usually I’ll wait a day or two but not more than a week. The idea behind this is that the rest of the dead/dying debris will act as a mulch for my new seedlings. I usually throw turnips, some sort of brassicas, oats, beans or whatever I can find in these plots. I do not till these plots but broadcast a heavy dose of seed directly onto the soil. My thought is that I want to offer the deer something nutritious that they won’t find elsewhere, while at the same time making sure they have something to eat throughout the season. If I just plant beans for instance, the deer will be feasting on the tender green growth until the first frost then they’ll lose interest once the pod-less bean plants die. I always try to incorporate turnips or other brassicas in my plots because they just get sweeter with time as the frosts turn their starches into sugars. Really, what to plant is up to the hunter, the time of year they’ll be hunting and their location.

While planting killing plots I don’t worry about scent control whatsoever because using power equipment with their oil and gas fumes it’s going to be impossible. I do however insist on wearing my ScentBlocker Recon Lifestyle gear. I’ve written many times about how much I love this work apparel and in the case I really appreciate their quick drying qualities and the fact that thorns do not penetrate. Some may ask why my arms were so torn up if Lifestyle gear is thornproof? Well, we should look at my dad’s arms, see that they are unscathed and ask him when he’s going to buy his own long sleeve Lifestyle shirt, since he took mine.

Good luck and have fun everyone! There’s not a lot more rewarding than killing a deer in a foodplot that I’ve created. If any of our readers have foodplot photos and advice, please share them with us at our Facebook page. Also, be sure to take great pictures and share them with us when you have a bit of success as well!

If you would like to submit your successful hunting pics while wearing your ScentBlocker gear, you can please go to: http://www.robinsonoutdoors.com/tech-ed/trophy-gallery/

Above The Game partners with Lightning Camera Arms.

Above The Game partners with Lightning Camera Arms.