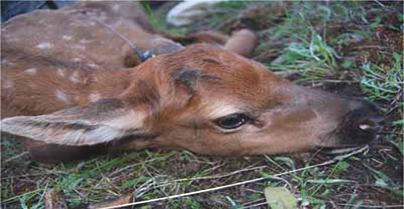 Elk populations in the Bitterroot Valley in western Montana have been monitored since the mid-1960s. Until 2003, elk numbers had steadily increased, but since 2004, cow:calf ratios have declined throughout the valley to just 14 calves per 100 cows, including a valley-wide historic low in elk calf
recruitment in 2009. The Montana Department of Fish, Wildlife and Parks initiated this research project to determine the cause. The project studied a range of issues, including predation from wolves, black bears and cougars, calf survival, calf:cow ratios, possible disease outbreak and herd productivity.

“The hope is that this project will help us understand the causes of low elk calf recruitment and develop management regulations to increase elk calf recruitment and elk population numbers,” says Mike
Thompson, Wildlife Manager for Western Montana. “We are especially in need of this level of detail where we intend to move carnivore populations up and down in relation to prey numbers.”

Montana Fish, Wildlife and Parks and the University of Montana recently completed the third and final year of a three-year project investigating the influence of predation, habitat, and nutrition on elk population dynamics in the southern Bitterroot Valley. During the third year of the study, they monitored cause-specific adult and calf elk survival. Adult mortalities included a combination of predation, non-predation and natural causes. Calf mortalities were primarily due to predation, and lion predation was the leading cause of calf mortality. Fieldwork on this project ended on May 31, 2014. During the upcoming fall and winter, the MFW&P will be working to complete analyses of the past three years of elk survival and movement data.

Pope & Young Club members participated directly in the first year of the research project by assisting with capturing and collaring elk calves. In addition to the donated man hours, the Pope & Young Club has donated $15,000 over the past 3 years to help accomplish this extremely important research.

“The Bitterroot elk project has reminded us all as wildlife biologists and managers that predator-prey systems are complex and challenging to predict and manage. Before our project started, many people were sure that the decline in elk recruitment and recent population size was due to recovering wolves, and argued that the state wildlife agency should aggressively start reducing wolf numbers. As we know through the west, this would have been a controversial management action because of the strong polarization of values around the wolf issue,” says Dr. Mark Hebblewhile, Associate Professor, University of Montana. “Instead, now 3 years later after wrapping up the first phase of the Bitterroot project we have clearly shown that wolves are an unimportant player in this complex predator-prey system, at least for elk. Instead, our project revealed high densities of mountain lions that were causing 5-6 times more mortality than wolves, and were the leading driver behind elk calf survival and population dynamics. With this research, the state agency can now make science-based management decisions that are defensible and also much closer to the truth than we were before we started this project. Of course, many funding agencies beyond Montana Fish Wildlife and Parks contributed to the research. We appreciate the support from a variety of sportsman’s organizations, including the Pope and Young Club. Without their support the project would not have been possible.”

Results of this research will be used to guide management actions in the Bitterroot Valley of western Montana and throughout the Northern Rockies where wolf recolonization is occurring. Specifically, estimating baseline rates of elk productivity and predator offtake will provide information on the role of predators in regulating the elk population, allow biologists to forecast the effects of alternative predator harvest scenarios, and estimate the level of hunter offtake that will be sustainable. Additionally, quantifying the sources and timing (neonatal, overwinter) of calf mortality will provide information useful in guiding management actions aimed at increased recruitment. If predation (wolf, black bear, or lion) is the predominant source of calf mortality, liberalized wolf, bear or lion harvests may be effective at reducing mortalities and increasing recruitment.

Established in 1961, the Pope and Young Club is a non-profit North American conservation and bowhunting organization dedicated to the promotion and protection of our bowhunting heritage, hunting ethics and wildlife conservation. The Club also maintains the universally recognized repository for the records and statistics on North American big game animals harvested with a bow and arrow. For information on joining the Pope and Young Club, please contact:
Pope and Young Club, Box 548, Chatfield, MN 55923 Ph: 507.867.4144
or online at www.pope-young.org