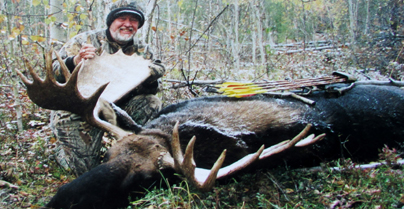 MOST EVERYONE HAS HEARD parents urge youngsters to respect their elders. Most everyone has tapped a toe to Aretha’s musical tribute to R-E-S-P-E-C-T. And certainly lots of bowhunters have nodded their heads while reading the legendary Fred Bear’s insightful words on the same subject: “Go afield with a good attitude, with respect for the wildlife you hunt and for the forest and field in which you walk. It will cleanse your soul and make you a better person.”

It’s a pity some hunters show so little respect for the wildlife they pursue. Here’s what I mean.

Like lots of folks, I’m a frequent Facebook user. I have both a personal and professional page with thousands of “friends,” many of whom share my interest in and passion for bows and arrows, game birds and animals, and wildlife conservation. Yet as I write this monthly column, I’m recalling multiple examples of obvious disrespect I’ve seen over this past week.

One defiantly mindless post read, “I kill sh** and eat it!”

Another post displayed multiple photos of bloody game animals, complete with open mouths and lolling tongues. Another showed a field dressed buck hanging by his rut-swollen neck from garage rafters, a pool of blood glistening on the floor beneath the carcass. Another showed a grinning guy crouched in the bed of a pickup, a cigarette stuck in the corner of his smile, an open can of beer in one hand and the buck’s rack in the other. And there was that deer’s bloody tongue, nose, and glassy-eyed stare.

Never mind that these posts later disappeared, likely following viewer complaints. But I saw them and so did lots of others. Frankly, they troubled me … and I’m a hunter. I can only imagine what non-hunters thought, especially if they have no basis for comparison between ethical, responsible sportsmen and women and those unthinking individuals who fail to grasp how much they are damaging the positive public image responsible hunters routinely project.

DURING MY 35 YEARS RUNNING BOWHUNTER MAGAZINE, God only knows how many field photos we published of proud hunters posing with their trophies. And everyone on the publication’s staff took considerable pride in posing in field photos free of blood, gore, and cocky smirks. Early on we recognized the responsibility all of us who bowhunt share. We always tried to put our best foot forward and “do no harm,” as medical doctors pledge. And although the diehard hunter-haters will never support us in the so-called “blood sports,” detesting all images of dead animals, a majority of reasonable folks support hunting for food and sound wildlife conservation reasons. That’s especially true when we’re seen as ethical and conscientious hunters.

To be perfectly candid and blunt, it’s stupid to piss off people who are on our side of this emotional issue.

Unfortunately, the world is full of ignorant, self-absorbed people who delight in the in-your-face tactics of challenge and confrontation. While the antis seemingly have a lock on irrational thought and uncivil discourse, a few hunters need to be fitted with camo dunce caps. We can be our own worst enemy at times, and that creates headaches that’ve been hanging around for decades.

So what can be done about the problem? Peer pressure is one answer. Speaking up, tactfully or forcefully, depending on the situation, works. I know that’s true from personal experience. In my seminars and banquet talks, I often suggest all bowhunters should get more involved in confronting anyone whose words or actions, unknowingly or intentionally, are casting hunting or hunters in a bad light. My punch line was: “Stand up and speak up. Quietly and calmly explain the facts of life to the offender. If he’s a big guy, take along a couple of buddies and a baseball bat … but speak your piece.”

Have I ruffled feathers? Of course. But I’ve also had more than a few positive reactions that made those potentially unpleasant situations well worthwhile.

THE ATTEMPTS OF SOME HUNTERS to grab social media attention, in my opinion, is the poor example set by some television “personalities” to whom killing an abundance of game is their primary reason for heading to the woods. Shooting has replaced hunting for many. They climb into a stand or blind and shoot most anything that ventures within bow range. Then they act like idiots, grinning like jerks, pumping fists, and dancing jigs while crowing “I just smoked (or whacked, thumped, hammered, etc.) that big ol’ buck! He’s taking a dirt nap! Just look at the size of that rack!”

News flash: Killing is not necessarily hunting. Hunting is not necessarily killing. But anyone watching the typical fare on various outdoor or sporting channels wouldn’t know that by tuning in. My old pal Gene Wensel, one of the most knowledgeable and successful big buck bowhunters alive, penned a thoughtful online rant on this subject not long ago. Its appropriate title was “When Hunting Became Shooting.” And readers familiar with my column may remember my recent rant about clueless, disrespectful “hunters” who shoot something and then mug for the unblinking camera. They typically refer to themselves as deer hunting “thugs” or “assassins” or “outlaws” or whatever label chosen to feed oversized egos and stir the blood lust of “fans” who seemingly enjoy watching wildlife snuff films. Their mindless mantra is the stale chant, “If it’s brown it’s down, if it flies it dies!”

Their mommas must be proud.

Anyway, unless and until fellow hunters become concerned and embarrassed enough to speak up, to both the perpetrators and their sponsors, it’s unlikely things will change. Hunting, in its purest form, is not a spectator sport. Or a competition. It’s a one-on-one matchup between hunter and prey that pits feral instinct against human intellect, defensive survival senses against rational thought and reasoning. Hunters who consider that buck or bull or boar mere targets, unworthy of our admiration and respect, will never understand the essence of fair chase, ethical pursuit, and the occasional meaningful kill.

After half a century of bowhunting virtually every big game species found on our continent, and having been fortunate enough to arrow several hundred magnificent animals over the years, I fully understand the thoughtful words of Papa Bear I quoted earlier.

Too Many Trophy Bulls!