by David Holder
in Bowhunting Posts
0 0
A A
0 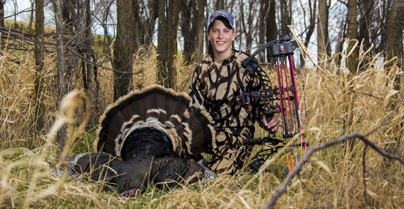 Next to my family, hunting is that “Thing” in my life that drives me. So, without a doubt some of that is bound to rub off on my boys. Since they are normal teenagers and lack a little drive on occasion, this spring I came up with a plan to get their help, and in doing so, give them a pretty good reward for it.

We own a 50 acre piece of ground in south central Iowa and since we bought it a little over a year ago, every night I have dreamed about what it would be like, if I could get a few strategic food plots placed on it. Wanting to get one of them in this spring, I knew I was going to need the help of my family.

I gave my boys the opportunity to help me with the food plot, if they did, they could pick where our family would spend 5 days for spring break, “within reason of course”. The two of them jumped at the idea and as we cleared trees and cut down weeds, I could tell they were discussing their options the entire time. I don’t know if I can recall a time I have ever seen them work so hard and for so long. By the time we were done we had not one but four food plots ready for action.

It wasn’t until they chose where they wanted to go that I saw the flaw in my plan. When they asked if we could go to Nebraska for the early bow season to hunt turkeys, as their dad I was pretty jacked, when I saw my wife’s face, I realized I had forgotten to fully inform her about this deal, a mistake any husband knows he shouldn’t make.

The thought of tropical drinks, warm sand and cool ocean breezes, was now snow and rain with intermittent gobbles. As a hunter I was like “heck yeah” but as a husband, I had to act like “dang it boys, are you sure this is what you want to do”, wink, wink. However my wife, being the noble person that she is, agreed to honor the deal. Later she pulled me aside and informed me, “You owe me big for this one, you realize that don’t you?” 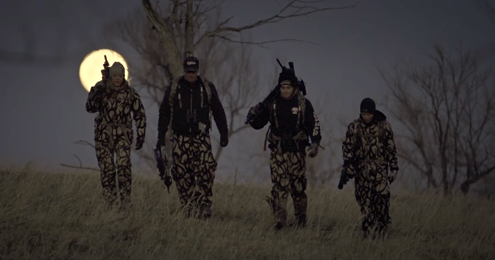 A couple of phone calls later and a few strings pulled, I had us a trip pulled together. In our family we are all about equality, so seeing’s how my wife and youngest son get to hunt the least amount, my oldest son and I decided to run cameras and let the others be the shooters, that was until they fired the first arrow, then it was our turn. Remember it’s all about equality.

So first up would be Easton and that first morning was downright incredible, at least 20 toms gobbling only a hundred yards away and if they pitched down in the right direction it would be more like a caribou hunt then a turkey hunt. The plan worked perfectly with a couple well placed decoys and a few soft calls and even though the entire flock didn’t come, a couple of 2 year olds, decided they better check out the new kids on the block. I remember thinking as they passed by my wife and I sitting in a brush blind, how awesome it was going to be to watch and film Easton shoot, while Warren his brother filmed from the blind the two of them were in, next to us.

The bigger of the two toms marched right in to the decoy while the other skirted around a few yards out. Both were spitting and drumming and we all were holding our breath waiting for Easton’s bow to go off. We kept waiting and waiting, until we all realized something must have gone wrong as we watched the two toms head back to the flock, without a shot ever being fired.

Karin and I sat in the brush trying to figure out what had just happened until the older brother, the one with very little sensitivity training, pokes his head out of the blind and says “Easton got scared”, which prompted Easton to pop out and defend himself, with “I did not, you idiot, I didn’t have a good shot”.

Which meant dad had to ask, “How did you not have a good shot at 7 yards strutting against the decoy?” Wrong question, my wife’s, the mom, answered for Easton by delivering, to me, a swift whack on the head and a firm, “Leave him alone, I think he was just a little nervous”. It was at that point that I saw a whole new perspective on this situation. Easton had just gotten a little taste of “buck fever” turkey style.

Now when this happens there can be several reactions; emptying the weapon without coming close to hitting anything, shooting before actually aiming or in this case just not shooting at all. So we complimented Easton for making the right decision, if you aren’t comfortable, don’t shoot.

So even though my older son was now arguing, how he should now be the shooter since little brother was acting more like a PETA member than a hunter, my wife and I decided the best thing to do was give Easton another crack at it that afternoon. So blinds were set and lunch was eaten in order to be ready for, hopefully, the return of the mob that had left that morning.

As my wife and I sat in a 2nd Double Bull blind about 80 yards from our two boys, we began to absorb the fact that the entire family was actually having a great time, in spite of Easton’s early morning debacle and the relentless picking of his older brother. Fact was, we were doing exactly what a vacation is supposed to do. Soaking up this time, this trip was allowing us to recharge and forget about work and bills for a few days and focus on what life has to offer because before long the boys will be out on their own, creating their own families and memories. I think my wife was just about to say “This isn’t so bad after all” when a danged old tom interrupted and was heading straight for the boy’s jake decoy.

We weren’t sure exactly where he came from, but it was obvious he had seen the decoy and was planning on doing something about that jake being too close to that hen. We watched as the tom marched in to point blank range. I don’t’ know if Karin was praying but I know I was, “Please Lord let this kid make a good shot” I mumbled to myself. Even though we knew the shot was coming, it still caught us by surprise when Easton’s bow went off.

Even from our less than perfect vantage point we could tell he had made a good connection and the bird wasn’t going far but confirmation came in a text that said “I just got a big one!”

It’s a funny thing how a family can joke and prod at one another but when someone comes through like Easton did, it was his brother that was out of the blind first, telling Karin and I how Easton had just done great, “He was at full draw and he was taking his time and when he released I knew that arrow was perfect”. I also love to see how excited everyone in our family gets when someone connects. I also love how we all share the disappointment when the hunts don’t go like they are supposed to.

It’s understandable when you see how much time we spend together. It’s as if we all know what the others are thinking or feeling. So it was a family thing as we took pictures of Easton with his turkey and our 70 degree sunny day began to give way to a cold north wind and the first few flakes of snow began to touch our faces. Everyone was smiling and basking in the glow of the moment when my wife put her arm around me and said “Did I mention, you owe me big for this one?” I laughed and said “Yes, I was thinking about that already and the boys and I wanted to do something very special for you, since we won’t be sitting on a beach this spring break. We have all discussed it and have decided, tomorrow you can be the shooter, how does that sound?”

Being the honorable person that she is, Karin laughed and said “That will do for now but you still owe me!”

All kidding aside, my wife and I look at this trip and see how hunting has affected our lives forever. We have taught so many lessons to our boys, through hunting. In this hunt alone we saw them learn about hard work, rewards, patience, discipline, how to conquer fear, how to take ridicule, and importantly, how to believe in themselves. You will never see or hear us say we are perfect but we are passionate about how we raise our boys. Raised Hunting and proud of it!

If you believe in the same, Please join us at raisedhunting.com
Oh, I almost forgot one more thing we learned, always, always include your wife on any deal, you make with your kids before you shake on it.

Joe Thomas Harvests the Mule Deer of a Lifetime