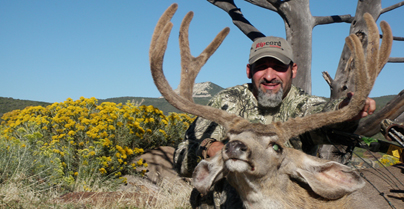 One of the unique opportunities of hunting Mule Deer in the West is the chance to harvest buck while they remain in the velvet. There are several states that offer an early enough archery season that allows the archer to hunt Mule Deer while their antlers are completely in velvet. For some hunters this is a huge attraction, while for others it is not desired. I officially fit in the former category.

I have become somewhat of a velvet junkie. Not, however, for the reasons that the Far East culture has come to love velvet in which the use powdered forms of the pre-calcified bone for all kinds of health benefits. My obsession with velvet antlers began 8 years ago and is a driving force in my hunting choices. If I have the opportunity to chase big mulies or really any species while in the velvet, I jump right at the opportunity.

The velvet antler is really just a cartilage growth that eventually mineralizes and turns to bone. The antler grows out of the pedicle and grows from the end out. As it grows it is covered with a fine skin called velvet which supplies the antler with nutrients and oxygen to heighten its growth. The growth of an antler is the fastest bone growth of all mammals. In just a few short months the antler grows to complete full size. Once the growth is complete, the velvet then peels away and the bone dies and calcifies. Most of the hunting opportunity for buck occurs in the calcified state.

Hunting the early season in Colorado, Nevada, Utah or any other state that offers the opportunity does take some additional know-how to harvest these soft antlered giants. During the time of year from mid August until the first week or so of September, finds the velvet clad Mule Deer in bachelor groups. The advantage to that is when you find one buck, there are usually more to choose from. The disadvantage to that is there are many sets of eyes to overcome along with noses and ears. These groups travel from bed areas to feeding and watering areas in a fairly common pattern. Although not pattered as tightly as Whitetail Deer, I have found some definite opportunity to pattern some aspects of the Mule Deer movement.

When you are hunting these velvet bucks, you will find great opportunity at water and food sources. They will be traveling in groups but those groups are eating often and in long duration. In Colorado, I generally have 7 to 10 hunting days to harvest a buck if I want to harvest a velvet deer. That means that preseason scouting becomes very important. Although the season lasts a full month, my velvet window of opportunity lasts only a few days. That is why having these buck located becomes a big deal maker. The problem I face in my home state of Colorado is that the deer change their patterns usually in the week just prior to the opener. That adds a lot of last second preparation because you have to relocate the buck and their location move after watching them for the entire summer. Once they are located and you know where they bed, eat and drink, the game is on. 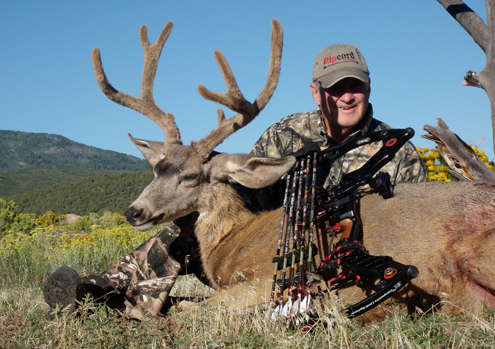 Author got his velvet buck and so did his hunting companion Don Dvoroznak.

The next aspect to harvesting these velvet Mule Deer becomes your basic hunting decisions. You know you are going to likely be up against many sets of eyes, ears, and noses. You know that you will likely be able to have choices of which buck to shoot out of the group but you will have no opportunity if you don’t apply basic hunting skills.

I approach Mule Deer in many different ways depending on their location and the overall situation. I will often hunt Mule Deer by spotting and stalking them. As I stated earlier, certain aspects of their life can be patterned. They will often eat in the same field each evening but the problem arises that they don’t enter the field from the same location very often. So although you know they are coming to that field, you don’t know which direction they will be coming from. You need to set up, wait, spot the animal of choice and then make an effective stalk to get within range. Although they are not as wary as Whitetail Deer, don’t be mistaken in to thinking it is just a walk in the park. Multiple deer means a challenge for sure. 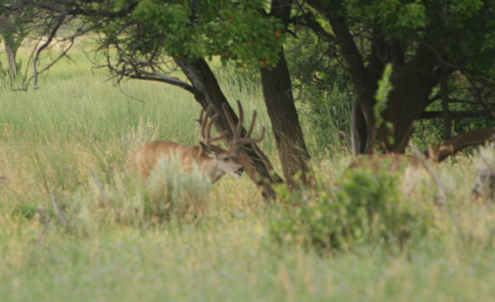 This is the 204 buck the author took 2 years later, coming in to eat.

Another technique that I use is trying to catch them in between their bedding and food source at a pinch point. I will set up on the ground just with natural cover, with a blind where feasible and even in a tree stand if I have a tree in a right location. I often use just natural cover because it allows me to move as these animals are more unpredictable in their movement. The largest velvet deer I have harvested was a 204” bruiser that I hunted for three years. I actually shot him at 18 yards sitting in the only brush that existed in the entire field. My son and I were located somewhat concealed in the brush right on the fence line hoping he would come in range. Our cover was minimal, but it was the only choice. 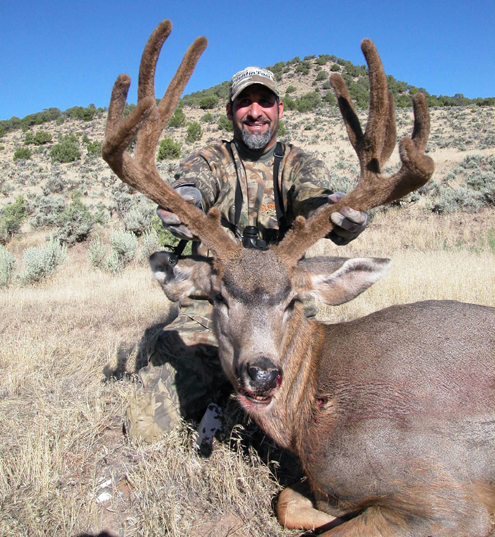 The last method I use on early season velvet Mule Deer is to cover a lot of ground during the hot part of the day. I spot and stalk, but also walk through some bedding areas in locations that I don’t hunt morning or evening. One thing I have learned is that a Mule Deer will often jump up and look or jump up and run 30 yards and then stops to look back. It is a quick and exciting approach to velvet Mule Deer hunting that doesn’t always yield a harvest, but often yields a hard beating heart. 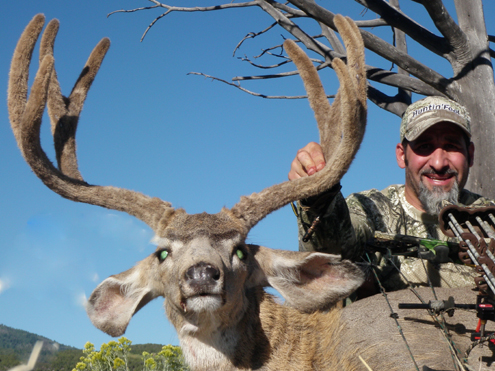 If you would like an opportunity at one of these velvet Mule Deer buck, you have a wide opportunity out west on all the vast BLM and Forest properties available to the public. You need to do your research and make sure you apply for points where necessary. Once you draw the tag the your next best move is to spend as many days afield as you can. If you want to hunt these velvet monsters in a guided situation, I would suggest you look at Cache Creek Outfitters in Mesa, Colorado. You can contact this outfit for a great Mule Deer hunt online at Cache Creek Outfitters

Bio: Matt Guedes is a follower of Christ who loves all that is hunting. Matt resides in Mesa, Colorado with his wife and three children. He enjoys sharing his passion and experience from all of his outdoor adventures. Matt is the owner of Journey Hunts. and is currently on many prostaffs with leading companies in the outdoor industry. You can contact Matt at matt@journeyhunts.com to speak at your game dinner or outdoor event.

For more please go to: Bear Columns And for the best in archery gear be sure and go to: Bear Archery Products 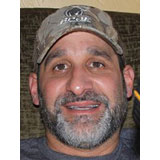 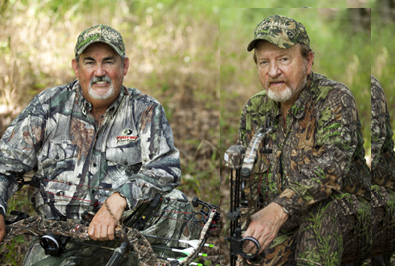 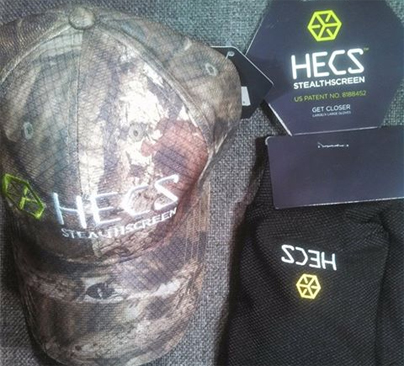 HECS GEAR GIVE AWAY! 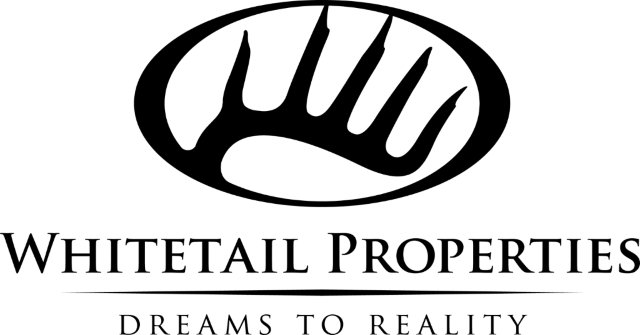 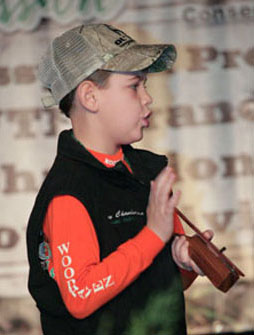