by Doug Bermel
in Bowhunting Posts
0 0
0 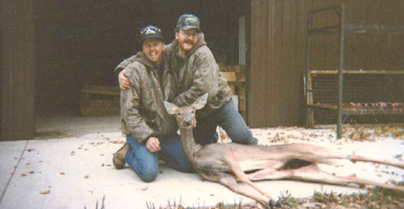 In 1973 while bow hunting in the Brainerd area of Minnesota, Dan Hedricks made a tragic mistake and fell out of his tree stand. Dan had many bumps and bruises but with time he was able to make a full recovery. As time passed Dan keep thinking back on how much more serious that fall could have been.

Seeing other disabled hunters and realizing how fortunate he had been and how easily he could have also become disabled, Dan had a strong urge to do something for the disabled. While doing some promotional filming at a Boy Scout camp in northern Minnesota, Dan noticed the abundant deer sign. He asked Camp Wilderness manager John Fieck if they allowed any hunting. John replied that hunting was not allowed on camp grounds. Being persistent Dan asked about disabled bowhunters being able to hunt. John thought for a moment and said that was a possibility. With that said the wheels in Dan’s head started turning. He went home and started making plans, the first order of business was to come up with a name for the organization . Then one night it came to him in a dream, United Foundation for Disabled Archers.

The next morning he wrote down the name and using the first letter in each word spelled out UFFDA. What a great name for a group in Northern Minnesota. He had a place to hunt and a name. Next on his agenda was obtaining donations and lining up hunters to be a part of his new organization. Dan started going to sporting goods stores, hardware stores and literally anywhere he could to pitch his idea. When he revealed his plan everyone he spoke to was eager to help out. As the word got out more and more guides and volunteers came forward and signed up. With the nucleous formed Dan then turned his attention to getting the disabled hunters who were the reason for UFFDA and the location to hunt.

Dan went to Capable Partners a Minnesota group of sportsmen who match a disabled person with an able body person for hunting and fishing events. The call went out to the membership and hunters started signing up. The hunt was going to be held at Camp Wilderness in October of 1994 but he first had to find out if the Camp would be accessible for disabled hunters. That spring called me and asked if Rod Guthier and I could come up and evaluate the facilities of the camp. Also eager to help, Rod and I went up to Emily, MN and toured the grounds. We gave Dan some recommendations on things that needed to be changed to make the camp accessible. Dan went to John and asked if the Boy Scouts could make the changes needed as part of their summer project. John said that was a great idea and went to work on making that happen. Slowly everything was coming together. Through the summer more hunters signed up and by fall 25 hunters were ready for the maiden voyage.

Guides arrived a week early to check out hunting spots and put up stands and ground blinds. Staff also arrived to get the kitchen and supplies in order in preparation for the hunt. As hunters started arriving they were matched with a guide who gave them a tour of the grounds, got them set up in the bunk house and looked over maps of the area they were going to be hunting. I was a hunter the first year and when I rolled into camp Thursday afternoon I was assigned to Bob Regan and Russ Kalk as my guides. The hunting would start Friday morning and everyone was eager to get an early start.

After a hearty breakfast, Bob and Russ took me out to the northern edge of the camp where they had a stand set up on an old logging road. Nothing was seen the first morning so Bob and Russ picked me up and we went back to camp for lunch and got ready for the afternoon hunt. It was a long ride by 4-wheeler to the stand but the sights along the way made it seem like a short trip. I got back in the stand and watched my guides drive away. It was lonely out there all alone with no way to communicated with anyone ( this was before cell phones) but I stayed true to my mission.

As I was looking down the trail I saw a doe pop out of the woods about a 100 yards away. She started walking my direction and I realized I was going to get a shot. I picked up my Horton crossbow and got settled in watching her every move. When she got to about 25 yards she looked back down the trail and this gave me a chance to line up the sights and get ready for the shot. When things looked good I set the Muzzy tipped arrow on its way. I heard the loud smack of a good hit and watched the doe run back into the woods. I had to wait for Bob and Russ to come pick me up so I just sat back and read my magazine waiting for them to show up.

When they arrived they asked if I had any luck and I pointed to the ground where my arrow laid from a good pass through. Everyone started whooping and hollering and shaking my hand. With Bob and Russ carrying me we took up the blood trail. We went about a 100 yards and found the doe piled up against a tree and then there was more celebration. Russ field dressed her and pulled her out to the logging road. They loaded her on the 4-wheeler and we went back to camp.. As we got back to camp the word got out and everyone came out to look at my deer. I was an instant celebrity as this was the first deer taken at an UFFDA hunt, a record that will never be broken. It was a very emotional night at the banquet with the rewards of a hunt gone well. Everyone got a chance to speak about their experience and how they had the opportunity to help make Dan’s dream a reality.

In the coming years as the hunt progressed more land owners offered their land to hunt. More volunteers and donations started coming in too. Now, everything is set for the hunt this year, October 2014. I have been on this hunt seven times and even when I didn’t get a deer I was never disappointed. They are a great group to be with and I have made many lasting friendships. If you want the chance to explore northern Minnesota and maybe get an opportunity to harvest a deer, sign up for the UFFDA hunt and check out what Minnesota has to offer.

This is a totally free hunt. The only requirement is you must be a member of UFFDA. If you would like to join or need more information call Dan Hendricks at 320-634-3660 or email him at bowtwang@charter.net

For more from Doug please go to: The Disabled Archer